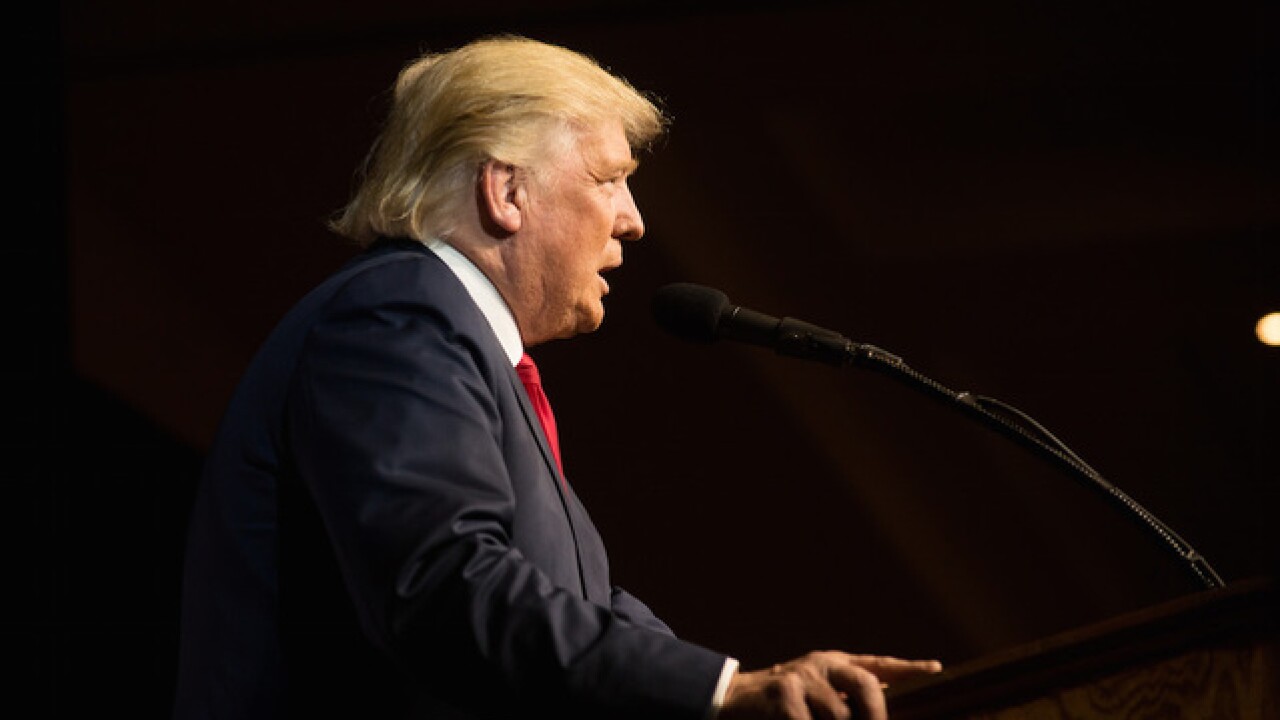 Caught on tape making shockingly crude comments about a married woman he tried to seduce, Donald Trump declared in a midnight video, "I was wrong and I apologize."

Yet even as he did so, he claimed the astonishing recording was "nothing more than a distraction" and argued his words were not nearly as egregious as former President Bill Clinton's marital affairs.

"I've said some foolish things," the Republican presidential nominee said in a taped apology posted on his Facebook page early Saturday morning. "But there's a big difference between the words and actions of other people. Bill Clinton has actually abused women."

Turning to his Democratic rival Hillary Clinton, Trump accused her of having "bullied, attacked, shamed and intimidated" her husband's "victims."

Trump's 90-second statement capped a jarring day that threatened to sink his presidential campaign and sent Republicans into a panic with early voting well underway in several states and a little more than a month until Election Day.

On Friday afternoon, The Washington Post and NBC News released a 2005 video on which Trump describes trying to have sex with a married woman. He also brags about women letting him kiss and grab them because he is famous.

"When you're a star they let you do it," Trump says. "You can do anything."

Within hours, the shock of the video led to widespread condemnation from inside Trump's own party. House Speaker Paul Ryan said he was sickened by Trump's comments, while a one-sentence response from GOP's chairman was devastating.

"No woman should ever be described in these terms or talked about in this manner. Ever," said Reince Priebus, who had stood by Trump through his past provocative comments.

Ryan added tartly that Trump was "no longer attending" a joint campaign appearance set for Saturday in Wisconsin. Trump himself later said in a statement that he would be preparing for Sunday night's debate instead.

Other Republicans, painfully aware of Trump's possible impact on their own political fates, were quick to chime in. New Hampshire Sen. Kelly Ayotte, who is locked in a close race, called his comments "totally inappropriate and offensive."

By the time Trump posted his video apology, three Republican members of Congress had called on Trump to abandon the race. Among them was Utah Rep. Jason Chaffetz, who called Trump's words "some of the most abhorrent and offensive comments that you can possibly imagine."

Trump's running mate, Indiana Gov. Mike Pence, was "beside himself" and his wife was furious, according to a person familiar with their thinking. That person spoke on the condition of anonymity, because they were not authorized to share the private discussion.

On the tape, Trump is caught on a live microphone while talking with Billy Bush of "Access Hollywood." The candidate is heard saying "I did try and f--- her. She was married." He also uses graphic terms to describe the woman's body and says he frequently tries to kiss beautiful women.

"Access Hollywood" said a recent Associated Press story about Trump's lewd behind-the-scenes comments as star of "The Apprentice" led it to dig through its archives and turn up the previously unaired tape. It was recorded during a bus ride while Trump was on his way to appear in an episode of the soap opera "Days of Our Lives."

Trump offered a half-hearted apology shortly after the video was released, saying he was sorry "if anyone was offended." Only hours later, after the scope of the damage became clear, did he release the video statement.

Trump appears alone in the video and appears to be reading off a script. He closes the video by suggesting he'll raise Bill Clinton's affairs again in the coming days.

Hillary Clinton seized on Trump's quotes from the 2005 video, calling them "horrific." She said in a Twitter message: "We cannot allow this man to become president."

But she had her own problems Friday with sudden revelations.

The WikiLeaks organization posted what it said were thousands of emails from Clinton campaign chairman John Podesta, including some with excerpts from speeches she gave to Wall Street executives and others — speeches she has declined to release despite demands from Trump.

The excerpts include Clinton seeming to put herself in the free trade camp, a position she has retreated from. In a talk to a Brazilian bank in 2013, she said her dream was "a hemispheric common market, with open trade and open borders."

Trump strongly opposes current U.S. trade deals and insists Clinton is too cozy with Wall Street to reform it.

Friday's developments came two days before Trump and Clinton are to meet in the second presidential debate, with the Republican urgently in need of a strong performance. After his uneven showing in the first contest, public opinion polls have showed Clinton pulling ahead in nearly all battleground states, some of which are already in the midst of early voting.

There were plenty of other problems for Trump on what surely was one of the worst days of his two-year drive for the White House.

His advisers planned for him to spend a quiet Friday preparing for the debate and meeting with border security officials. But the day was quickly consumed by a series of controversies, including Trump's unsubstantiated claim about immigrants in the U.S. illegally voting in the election and his questioning the innocence of five black teenagers exonerated in a 1989 rape case.

Then, there were new signs of unusual links between Trump and Russia. For the first time, the U.S. publicly blamed the Russian government for hacking the Democratic National Committee and accused Moscow of trying to interfere with the American election. Diplomats also told the AP that Russia had lodged a formal complaint with the United Nations over a U.N. official's condemnations of Trump.

Also in the mix Friday: New questions about the Trump campaign's finances. With roughly a month until Election Day, the campaign has yet to schedule the $100 million in television advertising that his campaign boasted about just two weeks ago.

The campaign has just half that amount scheduled, and late this week shifted ad money around rather than increasing its overall investment, suggesting a bit of penny-pinching even as the clock winds down.