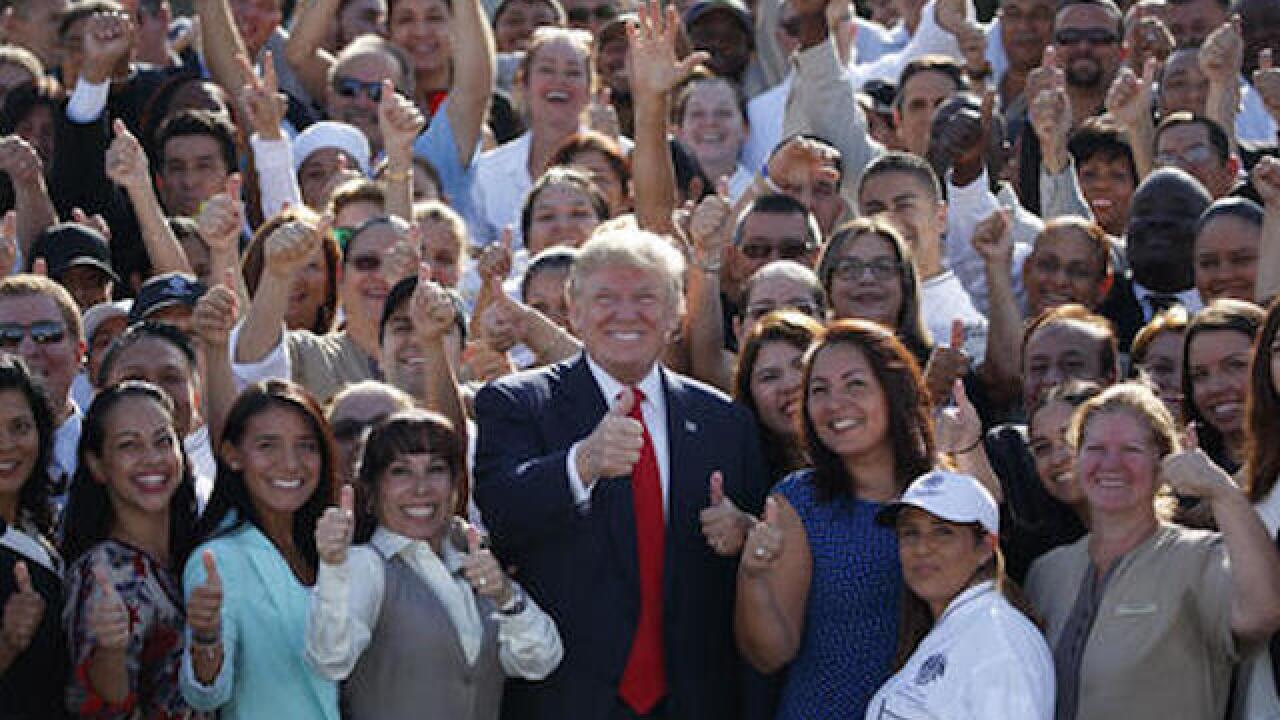 Just two weeks before Election Day, the New York businessman addressed the health care development during an appearance at one of his Florida golf resorts that highlighted the extraordinary intersection of his business and political interests. His message was somewhat scattershot, leaving questions of how well he and his party can capitalize on a revived emphasis on "Obamacare."

"We're down in Florida. We're at Trump National Doral. And it's one of the great places on earth," Trump said during a surprise visit to his golf club before encouraging his employees to praise him at the microphone. He suggested that many of his workers are having "tremendous problems with Obamacare" while highlighting a report that predicted premium increases of roughly 25 percent for the coming year.

A Doral employee later clarified that 95 percent of the club's employees are on company-provided insurance.

Trump vowed anew to "repeal and replace" the president's signature health care overhaul. Clinton says she wants to keep the best of the program but make improvements.

The Department of Health and Human Services reported Monday that premiums will go up sharply next year under the health care program, and many consumers will be down to just one choice for their insurer. Before taxpayer-provided subsidies, premiums for a midlevel benchmark plan will increase an average of 25 percent across the 39 states served by the federally run online market. Some states will see much bigger jumps, others less.

The report gives some Republicans some new hope in the presidential contest's final days as Trump's path to the White House narrows.

Clinton has yet to comment on the projected health care increases. She has previously promised to address health care cost increases and the declining insurance options if elected.

On Monday, the Democratic nominee campaigned alongside New Hampshire Gov. Maggie Hassan, who is in a tight Senate race against Republican incumbent Kelly Ayotte. The two Democrats got an assist from Massachusetts Sen. Elizabeth Warren, who was merciless as she seized on recent revelations of Trump's predatory sexual language and several allegations of sexual assault.

"He thinks that because he has a mouth full of Tic Tacs, he can force himself on any woman within groping distance," Warren charged. "I've got news for you Donald: Women have had it with guys like you."

Trump, in an interview with WGIR radio in New Hampshire, called the accusations "total fiction." He lashed out at his latest accuser, former adult film performer Jessica Drake, who said Saturday that he had grabbed and kissed her without permission and offered her money to visit his hotel room a decade ago.

Trump, who must win Florida to have any chance at the 270 electoral votes needed to win the presidency, is appearing at three Florida campaign events on Tuesday. Clinton, who can win the presidency with or without Florida, is making just one appearance, in the southern part of the state.

While they spar from a distance, hundreds of thousands of Floridians are voting. Tuesday marks the second day of early in-person voting. Early voting by mail began two weeks ago.

Traditionally, Republicans have run up a large advantage in mail-in-ballots, while Democrats rely on early voting to boost their turnout numbers. But this year the parties are running nearly even. So far, slightly more than 665,000 Republican voters have cast ballots in the state, compared to slightly more than 658,000 Democrats. Another 300,000 voters with no party affiliation have also voted.

At the same time, a new national poll shows young voters turning to Clinton now that the race has settled down to two main candidates. Clinton now leads among likely voters 18 to 30 years in age by 60 percent to 19 percent, according to a new GenForward survey.

Young black voters already were solidly in her corner, and now young whites are moving her way, according to the survey by the Black Youth Project at the University of Chicago with the Associated Press-NORC Center for Public Affairs Research.