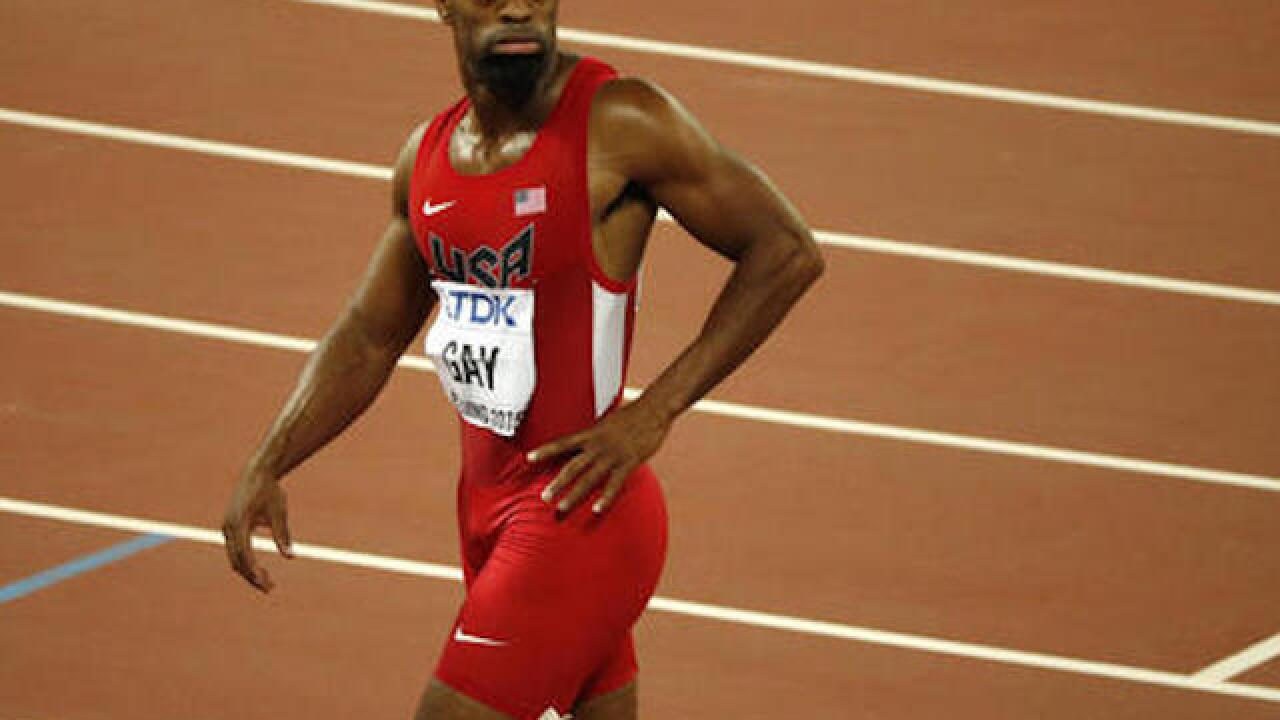 LEXINGTON, Ky. (AP) — Thousands of people joined Olympic sprinter Tyson Gay at a candlelight vigil Monday night on a Kentucky high school track honoring Gay's 15-year-old daughter, who was fatally shot over the weekend.
Gay stood on the track at Lexington's Lafayette High School where he and daughter Trinity excelled and he thanked people for showing support after the girl's death early Sunday after gunfire erupted outside a restaurant in that city. The teen's mother, Shoshana Boyd, also was present amid the crowd honoring her memory.
"I want you guys to love each other, have peace and protect each other," said Gay, who added that he was numb from crying over her death. "That's what Trinity would have wanted. ... Life is not a joke."
Many in the crowd wore pink and purple — Gay's favorite colors — with some holding balloons of those same hues that were later released into the air. Several pairs of track spikes hung from a fence along with a baton that said In Memory of Trinity.
Three men charged in connection with the shooting pleaded not guilty Monday and face an Oct. 25 court date. The three appeared via video before Fayette County, Kentucky, District Court Judge T. Bruce Bell.
Bell set bail at $5,000 each for Chazerae Taylor, 38, and his son, D'Markeo Taylor, 19, on wanton endangerment charges. Dvonta Middlebrooks, 21, is charged with wanton endangerment and possession of a firearm by a convicted felon. His bail was set at $12,500.
Bell will assign attorneys for two of them. The younger Taylor already has a lawyer.
Lexington police say Middlebrooks was in the parking lot of the Cook Out restaurant early Sunday and fired multiple shots in the incident in which Trinity Gay was shot. Court records said the Taylors acknowledged firing shots.
Police spokeswoman Brenna Angel said police don't believe Trinity Gay was in either of two vehicles involved.
Gay told The Associated Press on Monday evening that in talking with police, he believed his daughter was an innocent bystander. But he said authorities didn't reveal details of their investigation.
Tyson Gay said he and his daughter were very close, according to Lexington TV station WLEX, which spoke to him Sunday.
"It's so crazy. I have no idea what happened," Gay told the station.
Grief counselors also went to the Lexington high school Monday for students and staff, Fayette County Public Schools spokeswoman Lisa Deffendall said. Years ago, Gay had attended the same school as his daughter. Trinity Gay was a standout sprinter, placing in the top five in several events at the state championships in May. Her father still holds the state record in the 100 set in 2001.
Lafayette principal Bryne Jacobs, teacher Rhonda Mullins and girls track coach Crystal Washington all described Trinity Gay as friendly and outgoing. She dreamed of becoming a surgeon.
"She was full of energy and life," said Mullins, who had Gay in family and consumer science classes along with the Future Educators of America club. "She was a kid that everybody wanted to teach."
Jacobs said Trinity Gay's mother, who also attended Lafayette, had thanked him for support from the school and community, and noted that Trinity's life was something to celebrate.
"Our hearts are burdened that she is not in our building anymore," Jacobs said.
The emotions flowed before, during and after a candlelight vigil on the track where Trinity Gay excelled. Tyson Gay hugged Shoshana several around him.
Many others hugged and cried, but Jerome Brown, 16, held his feelings for his former teammate in check. "I don't want to cry, but it hurts a lot," said Brown, who ran with Trinity Gay since she was 9. "I wanted to come here for her mom. With Trinity, when she was on the track, it was home."
Tyson Gay competed in the last three Summer Olympics. He was part of a team that won a silver medal in the 4x100-meter relay at the 2012 London Games, though that medal was ultimately stripped after Gay tested positive for steroids in 2013.
Last summer's Games in Rio featured another stinging disappointment for Gay, 33, who has battled injuries. He was a member of the American men's 4x100-meter relay team that finished third in the final before being disqualified for an illegal baton exchange between Mike Rodgers and Justin Gatlin. The team's appeal was denied, giving Canada the bronze medal.
Copyright 2016 The Associated Press. All rights reserved. This material may not be published, broadcast, rewritten or redistributed.