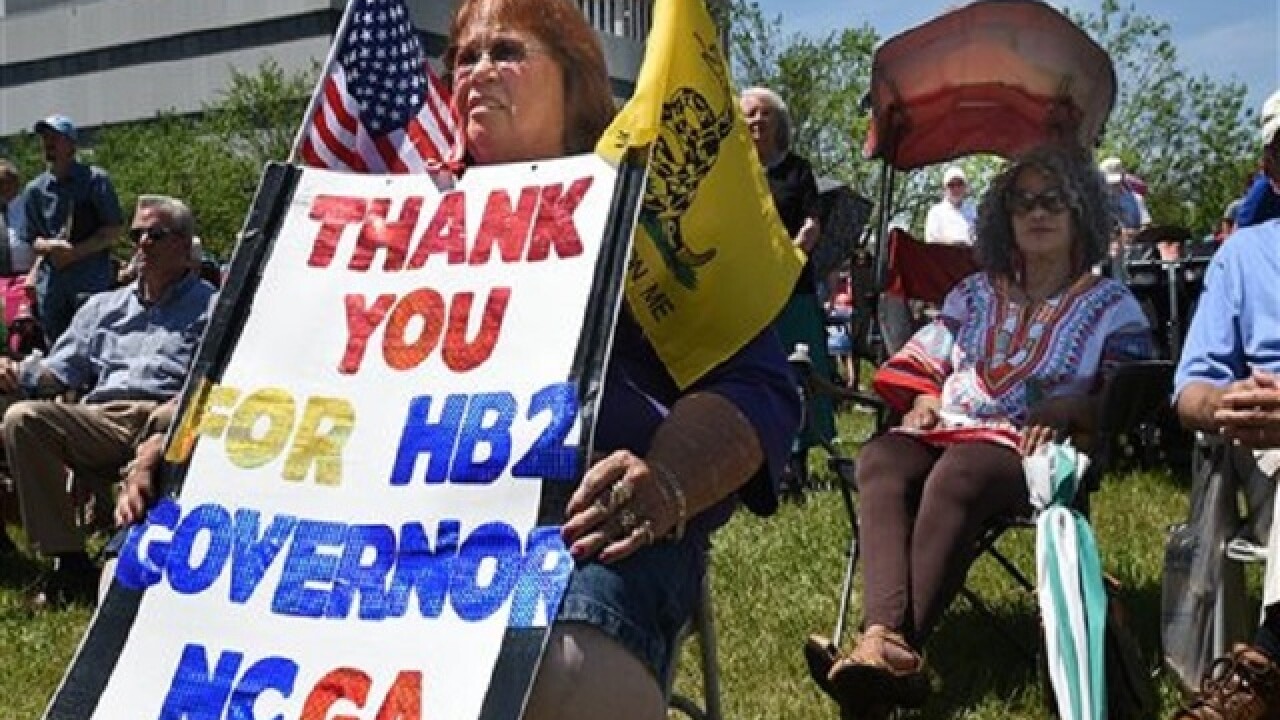 Chuck Liddy
<p>Lee Churchill, of Raleigh, shows her support of HB2 during a rally at the Halifax Mall in Raleigh, N.C., Monday, April 25, 2016. While demonstrations circled North Carolina's statehouse on Monday, for and against a Republican-backed law curtailing protections for LGBT people and limiting public bathroom access for transgender people, House Democrats filed a repeal bill that stands little chance of passing. (Chuck Liddy/The News & Observer via AP)</p>

RALEIGH, N.C. (AP) — A North Carolina law limiting protections to LGBT people violates federal civil rights laws and can't be enforced, the U.S. Justice Department said Wednesday, putting the state on notice that it is in danger of being sued and losing hundreds of millions of dollars in federal funding.
The law, which also requires transgender people to use public bathrooms that conform to the sex on their birth certificate, has been broadly condemned by gay-rights groups, businesses and entertainers, some of whom have relocated offices or canceled shows in the state. Several other states have proposed similar laws limiting LGBT protections in recent months.
In a letter to Gov. Pat McCrory, the Justice Department said federal officials view the state law as violating federal Civil Rights Act protections barring workplace discrimination based on sex. Provisions of the state law directed at transgender state employees violate their anti-discrimination protections, the letter said.
"The State is engaging in a pattern or practice of discrimination against transgender state employees and both you, in your official capacity, and the state are engaging in a pattern or practice of resistance" of their rights, the letter said.
McCrory's spokesmen did not respond to email and text messages Wednesday. In the past the governor, who signed the bill into law in March, has defended it and said he didn't think it would have any financial impact, either on the economy in general or on federal school funding in particular.
But shortly after it was passed, PayPal reversed plans to open a 400-employee operation center in Charlotte, Deutsche Bank froze expansion plans near Raleigh and convention officials reported some meetings were avoiding the state. Nearly 200 corporate leaders from around the country, including Charlotte-based Bank of America, have urged the law's repeal, arguing it's bad for business because it makes it more difficult to recruit talented employees.
House Speaker Tim Moore, who helped pass the law known as House Bill 2, said he would speak with McCrory and Senate leader Phil Berger about the state's legal options. Moore told reporters the letter was an attempt by President Barack Obama's administration to "continue its radical left agenda" in his final months in office.
"This is a gross overreach by the Obama Justice Department that deserves to be struck down in federal court," Berger said in a news release.
The Justice Department also said in its letter that it has notified the 17-campus University of North Carolina system that the state law violates Title IX of the Civil Rights Act, which bars discrimination in education based on sex. That could lead to North Carolina losing hundreds of millions of dollars in federal school funding.
The letter effectively serves as a warning to the state to proceed at its own peril or risk being sued. Civil-rights groups and several individuals sued in North Carolina federal court in late March seeking to overturn the law.
McCrory and GOP legislators "were warned about these dire consequences, but they ignored the law and the North Carolinians it would harm and passed the bill anyway," said a statement from the American Civil Liberties Union and Lambda Legal, which helped filed the lawsuit. "The only way to reverse the ongoing damage H.B. 2 is causing to North Carolina's people, economy, and reputation is a full repeal."
It has not been uncommon during the administration of President Barack Obama for the Justice Department to weigh in on hot-button civil rights issues. In March, the department sharply discouraged state court administrators from jailing defendants who can't pay court fines for petty offenses. The letter to North Carolina doesn't have the force of law, but it puts the state on notice that its actions are being watched and run afoul of federal civil rights laws.
The letter seeks confirmation by Monday that "the State will not comply with or implement H.B. 2, and that it has notified employees of the State and public agencies that, consistent with federal law, they are permitted to access bathrooms and other facilities consistent with their gender identity."
The government could file a lawsuit to protect state employees from discrimination, the letter said.
The Justice Department's intervention could affect similar laws passed in other states.
Mississippi's House Bill 1523, which becomes law July 1, says government and business workers can deny services to people by citing their own religious beliefs that marriage should only be between a man and a woman and that a person's gender is set at birth and is unchangeable.
The day after Republican Gov. Phil Bryant signed the bill, Democratic U.S. Rep. Bennie Thompson of Mississippi sent a letter to Attorney General Loretta Lynch, asking her to block what he called the "overreaching, unconstitutional, and blatantly discriminatory piece of legislation." Thompson told The Associated Press in a text message Wednesday that he had heard about the Justice Department's letter to North Carolina.
"I would expect a similar letter to be sent to Mississippi in the near future," Thompson said. "The circumstances in both states are closely aligned. Discrimination in the name of religion is illegal."
Officials from Bryant's office and the Mississippi attorney general's office said they had not received a letter from the Justice Department by Wednesday.
"Mississippi's law prevents state agencies and political subdivisions from punishing employers that opt to have gender-specific standards" for employees' dress or restroom use, Chandler said. "This law does not establish or mandate a specific policy for restroom facilities."
Associated Press 2016