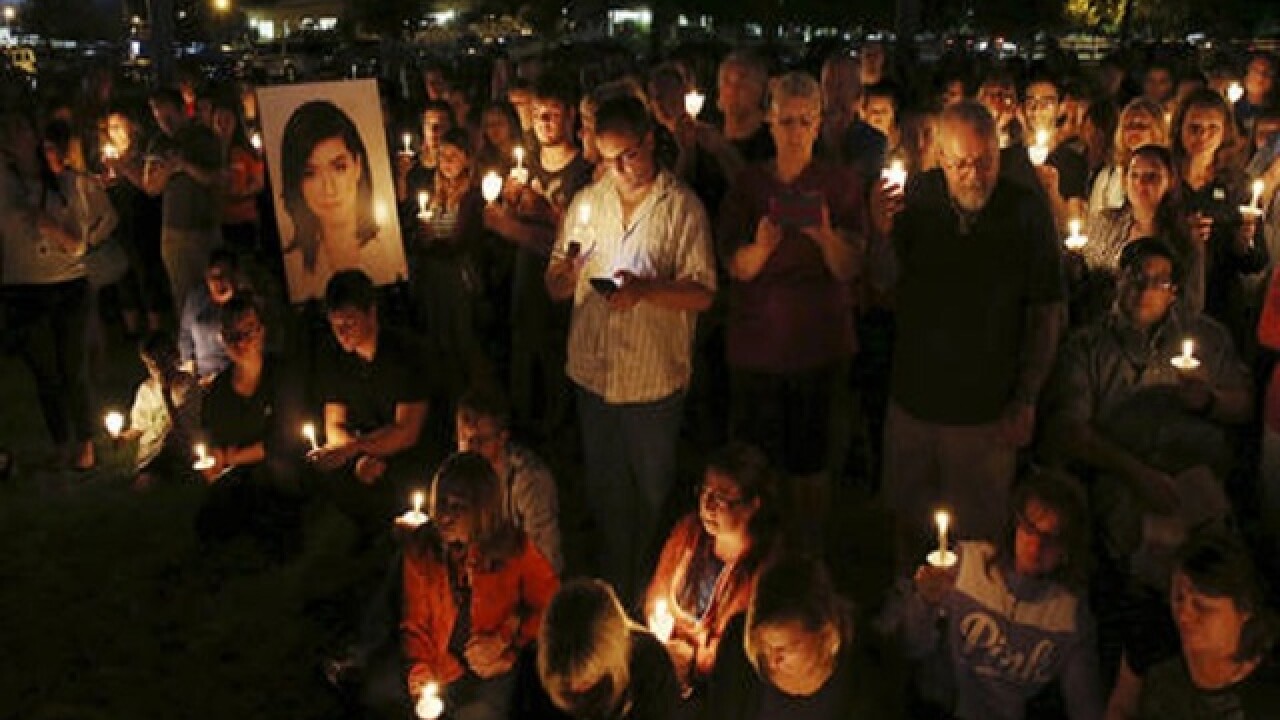 Mel Evans
<p>People stand near a large photograph as they hold candles during a vigil to honor Christina Grimmie, the 22-year-old singer who was fatally shot Friday night after a concert in Florida, Monday, June 13, 2016, in Evesham Township, N.J. Grimmie finished third during season six of NBC's "The Voice." Authorities said Kevin James Loibl was identified as the gunman who shot and killed Grimmie. (AP Photo/Mel Evans)</p>

EVESHAM TOWNSHIP, N.J. (AP) — Family, friends and fans gathered for a candlelight vigil in the New Jersey hometown of a singer who was shot dead as she signed autographs for fans following a Florida concert.
Hundreds paid tribute to 22-year-old Christina Grimmie Monday night in Evesham Township at the town's Memorial Complex, where photos of her graced the field.
"It doesn't seem real," close family friend Hope Compton told the Courier-Post. "But we'll see her again in heaven."
Compton told the newspaper that she flew to California to be with Grimmie's mother after the shooting and flew back with her Monday afternoon.
Authorities said Grimmie was gunned down by Kevin Loibl Friday night as she signed autographs after performing at a show in Orlando. A motive for the shooting has not been determined. Authorities said she had no personal connection to Loibl, who fatally shot himself after being tackled by her brother.
"She loved this town, Marcus Grimmie told the crowd. "She loved this state. She loved singing. She loved the Lord and she loved me. She was my baby sister."
Grimmie was a YouTube star who was widely known from her appearances on NBC's "The Voice" two years ago. She lived in Evesham, a small community about 20 miles from Philadelphia, before moving to Los Angeles in 2012.
Earlier Monday pop star Adam Levine, who mentored Grimmie when she finished third on "The Voice," offered to pay funeral expenses. Spokeswoman Carleen Donovan confirmed that Levine made the offer.
Copyright 2016 The Associated Press. All rights reserved. This material may not be published, broadcast, rewritten or redistributed.