Protester arrested after climbing the base of Statue of Liberty 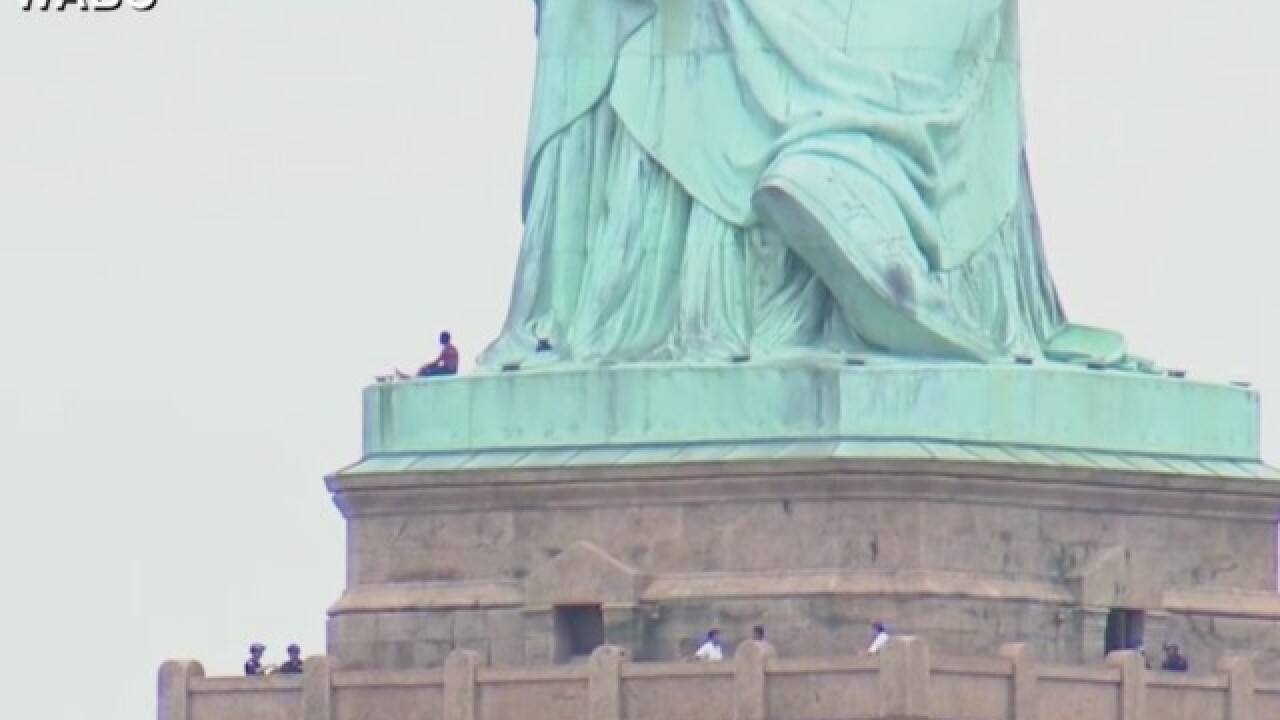 A woman who climbed up to the robes of the Statue of Liberty to protest the separation of migrant families was taken into custody after a standoff with police on the Fourth of July.

Authorities had tried to talk the woman down but she refused to leave. For nearly three hours, she crossed the base of the statue, at times sitting in the folds of the statue's dress and under Lady Liberty's sandal. The woman was identified as Therese Patricia Okoumou by a law enforcement source close to the investigation and another source who knows her.

The woman was part of a group of protesters and had declared that she wouldn't come down until "all the children are released," a source with the New York Police Department told CNN.

About 16 officers with the New York City Police Department's Emergency Service Unit -- a team trained to perform some of the most dangerous rescues in the city -- took part in the rescue/apprehension effort, Officer Brian Glacken said in a news conference Wednesday evening.

"At first, she wasn't friendly with us, but we took the time to get a rapport with her so that took a while," said Glacken.

"She just kind of mentioned the kids in Texas. I guess the whole debate that's going on about that. In the beginning, she threatened to push us off, push the ladder off, but we stayed with her," Glacken added.

Finally, officers with ropes and climbing gear reached her.

"At first she was being a little combative, then she was willing to cooperate with us. She actually apologized to us for having to go up and get her," Glacken told reporters.

Officers put a harness and ropes on her to bring her down, and she crossed to the other side of the statue with the officers where a ladder was propped up on the base of the statue.

The woman is affiliated with Rise and Resist, an organizer of the group, Martin Joseph Quinn, told CNN. But, Quinn said, her climb was not part of the planned protest. "She climbed without our knowledge. It was not part of our action," Quinn said.

National Park Service spokesman Jerry Willis said the woman was in federal custody Wednesday evening and will be transported to a US Marshals office in Manhattan.

Police believe seven other protesters -- who were also arrested Wednesday -- boosted her to the base of the statue, said New York Police Lt. Michael McGuinness.

"None of us know how she got up there," said Jay W. Walker, an organizer and board member of Rise and Resist.

In a statement, the group said they supported Okoumou and that members are "working to secure the best legal representation" for her.

Park police have recommended charges to the US attorney for the Southern District of New York, Willis added. Possible charges include trespassing, disorderly conduct and interfering with government functions.

Earlier, other protesters unfurled a banner over a railing around the base of the statue saying "Abolish ICE!" At least seven people were arrested on Liberty Island and the site was closed to visitors.

Walker said the theme of the protest was that Lady Liberty is weeping over the unconstitutional excesses of ICE under the Trump administration.

"We thought we wanted to do something on our Independence Day, a day that obviously is meant for reflection on the ideals on which this nation was founded. This country has posited itself as a beacon. Right now, we have a government that is actively turning its back on those ideals," Walker said.

Liberty Island was evacuated during the police action, according to Willis.

Tourist Tiana Smith of Atlanta said she was walking toward the statue during a tour Wednesday afternoon when the workers there started telling everyone to turn back.

"We got towards the ferry to ride back and we saw the SWAT team get off, and the police officers came with their harness and the helicopters, so we were like, yeah, we just need to go," she told CNN.

Statue Cruises, which provides trips to the Statue of Liberty and Ellis Island, had to turn away as many as 3,000 people because of the statue climber, company representative Rafael Abreu told CNN.

The Fourth of July is normally one of their busiest days of the year and they typically see 22,000 visitors on summer days, says Abreu.

At one point, Okoumou walked back and forth under Lady Liberty's sandal and then sat down and appeared to unfurl a small flag or banner.

The NYPD had built a rope rescue system to help bring her down from the base, because officers didn't believe she would come down on her own, a police source told CNN.