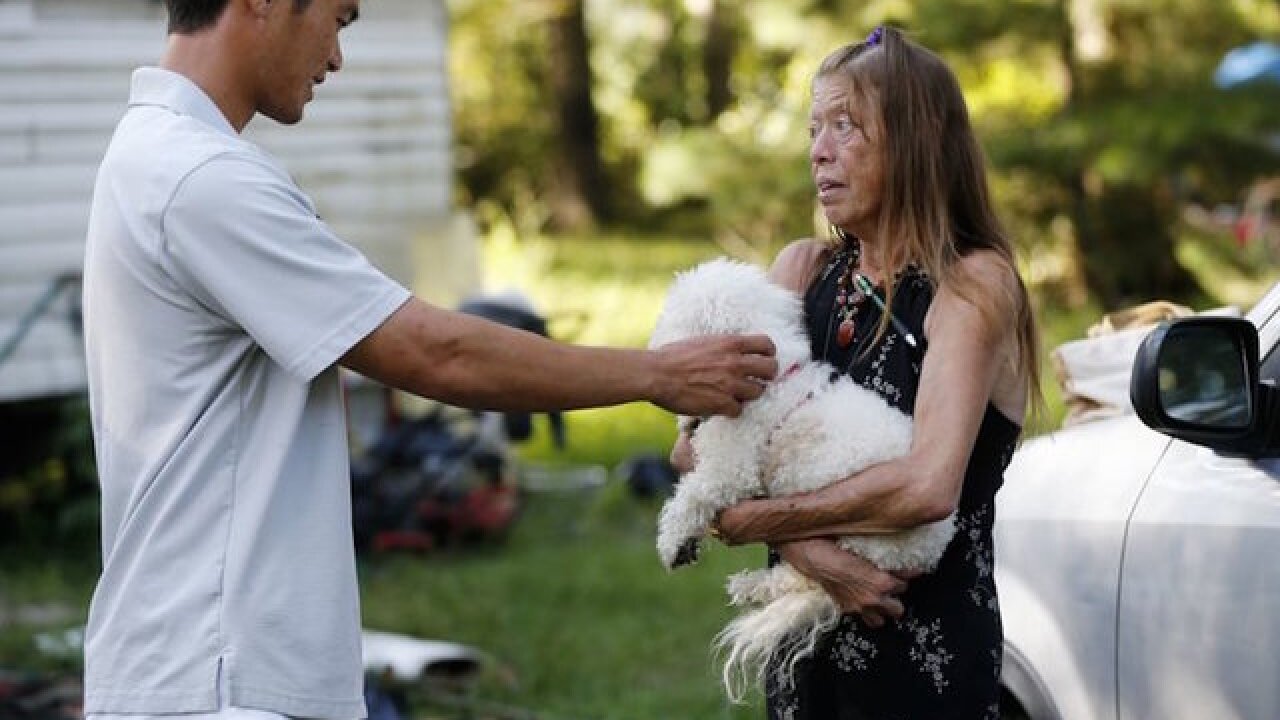 <p>David Phung, who rescued Hailey Brouillette and her dog Sassy from her sinking car in recent floodwaters, reunites with her for the first time in Denham Springs, La., Monday, Sept. 12, 2016. An Aug. 13 rescue video shot by WAFB-TV has millions of YouTube views. It shows floodwaters swallowing Brouillette's red convertible as Phung grabbed Brouillette by her arms as the car disappeared in the murky waters. (AP Photo/Gerald Herbert)</p>

DENHAM SPRINGS, La. (AP) — Millions of people have seen and shared the video of a good Samaritan jumping off a boat to rescue Hailey Brouillette and her dog from a car sinking into south Louisiana floodwaters last month. Brouillette isn't one of them, but she finally got to meet the man who saved her life.

Although she heard David Phung's voice during the rescue, Brouillette never saw her rescuer's face before their reunion Monday at a Denham Springs home where she is temporarily staying.

"I know I don't know you, but I love you," Brouillette, 53, said as she hugged and thanked the man she called her "angel" and "savior."

"It was nothing," Phung, 27, replied before Brouillete introduced him to Sassy, the poodle mix he also saved.

A Red Cross volunteer who befriended Brouillette at a shelter arranged Monday's meeting. Brouillette lost her trailer home and all of her belongings in the flooding. Phung brought her a load of supplies, including dog food.

"It's just who we are in Louisiana. We help people in times of need," he said. "I was put in that place to help her out."

The Aug. 13 rescue video shot by WAFB-TV has millions of YouTube views. It shows floodwaters swallowing Brouillette's red convertible as David Phung and two of his relatives arrive in a boat and urge her to get out of the car.

Phung tried to smash a car window from the boat, then jumped into the water and used his hands to rip open a hole on the top of the car. Phung grabbed Brouillette by her arms as the car disappeared in the murky waters. She remained submerged for several seconds before Phung finally pulled her out of the water.

"Get my dog!" she immediately shouted.

The poodle appeared to be underwater for at least 20 seconds before Phung took a deep breath, dipped below the surface and emerged with the dog cradled in his arms.

Phung said he lost count of how many people that he helped save from the floodwaters, but none was more dramatic than Brouillette's.

"I didn't actually see the tape until two days later because I was working from sun up late into the night, just helping people," he said. "I was actually amazed at how calm and collected I was. I guess it was just the adrenaline took over."

"I know I don't know you, but I love you," Brouillette, 53, said as she hugged and thanked the man she called her "angel" and "savior."
Before getting caught in the floodwaters, Brouillette said she had been released from a hospital that morning after being treated for a kidney ailment. She was on her way to a pharmacy to get prescriptions filled when the car she borrowed from a friend was overcome by the water.

She believes "divine intervention" also played a part in her survival.

Carolyn Perry, a Red Cross volunteer, said she watched the rescue video several times from her home in Kern County, California, before she was deployed to Louisiana.

"I was drawn to it," she said. "I just had this strange feeling I'm going to meet this woman."

Within three days of seeing the video, Perry recognized Brouillette at a Baton Rouge shelter that provided refuge to hundreds of flood victims. Perry said she hugged Brouillette and explained how the rescue had struck a chord with her.

"She was very, very humble, and we just struck up a friendship," Perry said. "For the next three days, we had a lot of heart-to-heart talks about life."

Before Perry returned home to California, Brouillette asked her new friend for help in connecting with the man who had saved her. Perry contacted an Associated Press reporter, who provided her with a telephone number for Phung. Perry called Phung and arranged for him to meet Brouilette and her dog.

At the end of their meeting, Brouillette gave Phung her phone number and embraced him one more time.