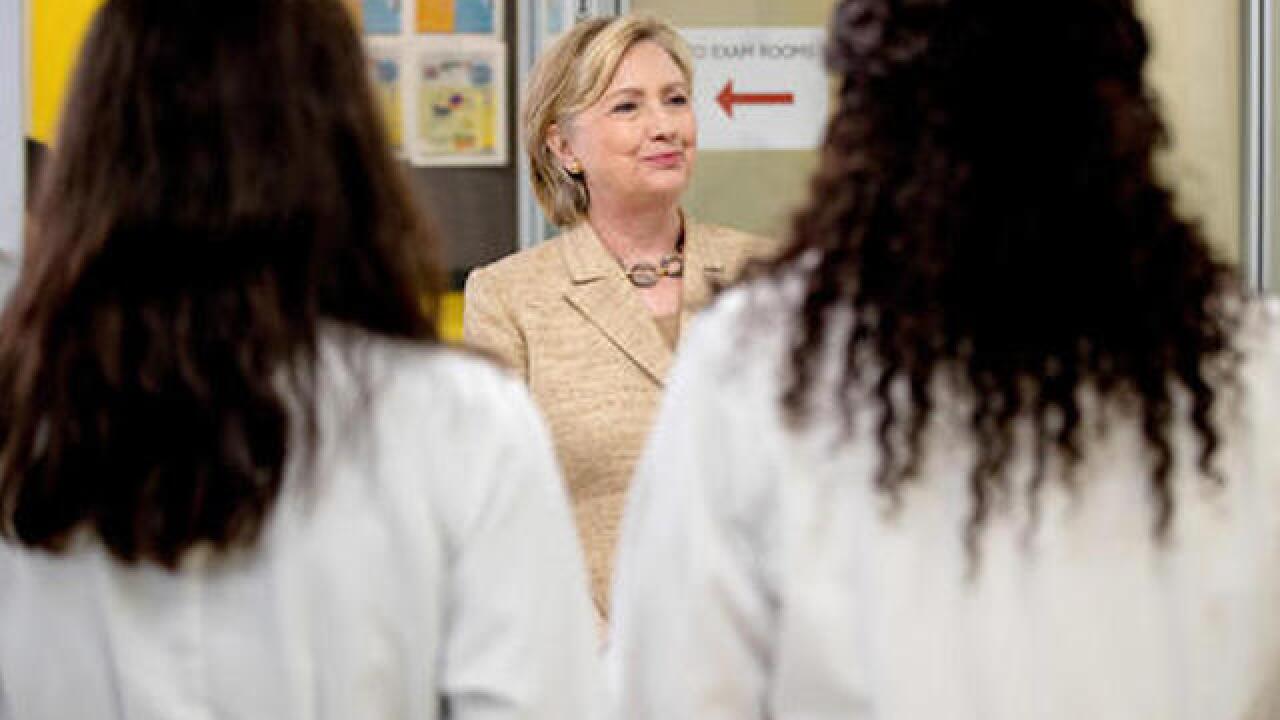 Copyright Associated Press
Andrew Harnik
<p>Democratic presidential candidate Hillary Clinton meets with doctors as she takes a tour of Borinquen Health Care Center, in Miami, Tuesday, Aug. 9, 2016, to see how they are combatting Zika. The center is within and serves the current area identified by the CDC where the Zika virus is being spread by mosquitos. (AP Photo/Andrew Harnik)</p>

The Democratic presidential nominee says the U.S. is failing to sufficiently invest in public health preparedness, not only for Zika, but health threats from potentially pandemic diseases, climate change and possible bioterrorism.

If elected, Clinton would create what she's calling a "Public Health Rapid Response Fund" to help federal agencies and local hospital systems respond faster and more aggressively — similarly to how the government responds to a natural disaster. The program would allow the executive branch to deploy money and other resources without having to wait for congressional approval.

Clinton's proposal is similar to legislation introduced by Sen. Bill Cassidy, R-La., and Sen. Brian Schatz, D-Hawaii, that would release funds after the secretary of health and human resources declares a public health emergency. Under their proposal, after a federal audit, agencies involved in the response effort would pay half the money back. The other half would be designated as emergency spending and not repaid.

The campaign did not detail how the government would pay for the fund or its size, beyond saying it would cost several billion dollars over 10 years.

Earlier this month, Clinton toured the Borinquen Medical Center, a health clinic close to the Wynwood area in Miami where a number non-travel-related Zika cases have been diagnosed.

Public health experts worry about the disease spreading: On Tuesday, Florida Gov. Rick Scott announced a non-travel-related case of Zika in the Tampa Bay region, the first in the state outside the Miami area.

Zika can cause severe brain-related birth defects, including a dangerously small head, if women are infected during pregnancy.

Lawmakers left Washington in mid-July for a seven-week recess without approving any of the $1.9 billion that President Barack Obama requested in February to develop a vaccine and control the mosquitoes that carry the virus. Clinton has urged Congress to cut short its summer recess and immediately pass funding for a Zika response. She has blamed congressional Republicans for inaction.

Clinton laid out a plan to combat the virus last March, which included allocating $1.8 billion in emergency funds. A month later, she dispatched two of her aides to Puerto Rico, where hundreds of cases have been detected, to meet with medical professionals.

GOP rival Donald Trump appeared to agree with Clinton that lawmakers should fund efforts to combat Zika. He told the Miami Herald earlier this month that he would "let some of the funds that they're asking for come in" to fight the virus.

"It's a tough thing to stop anyway," he told the paper. "But they're spraying all over the place. I see it. And I think it'll be fine."