MSP says "whole bridge will need to be removed" 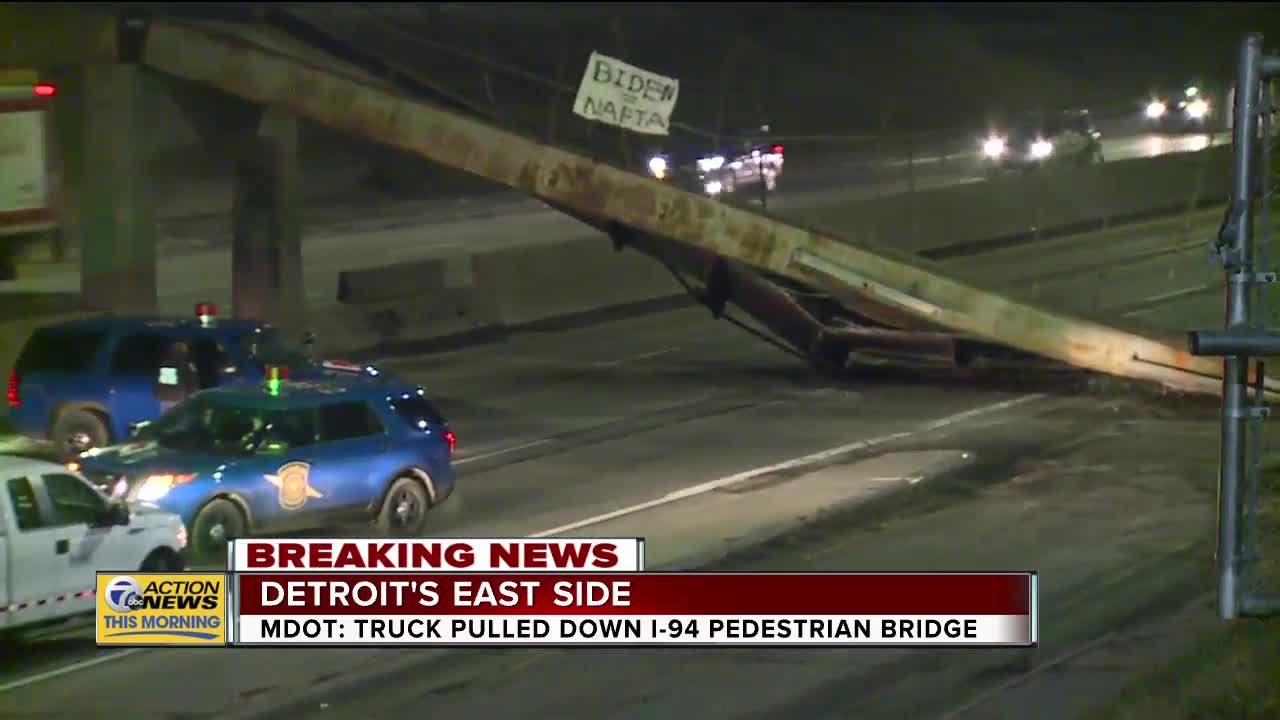 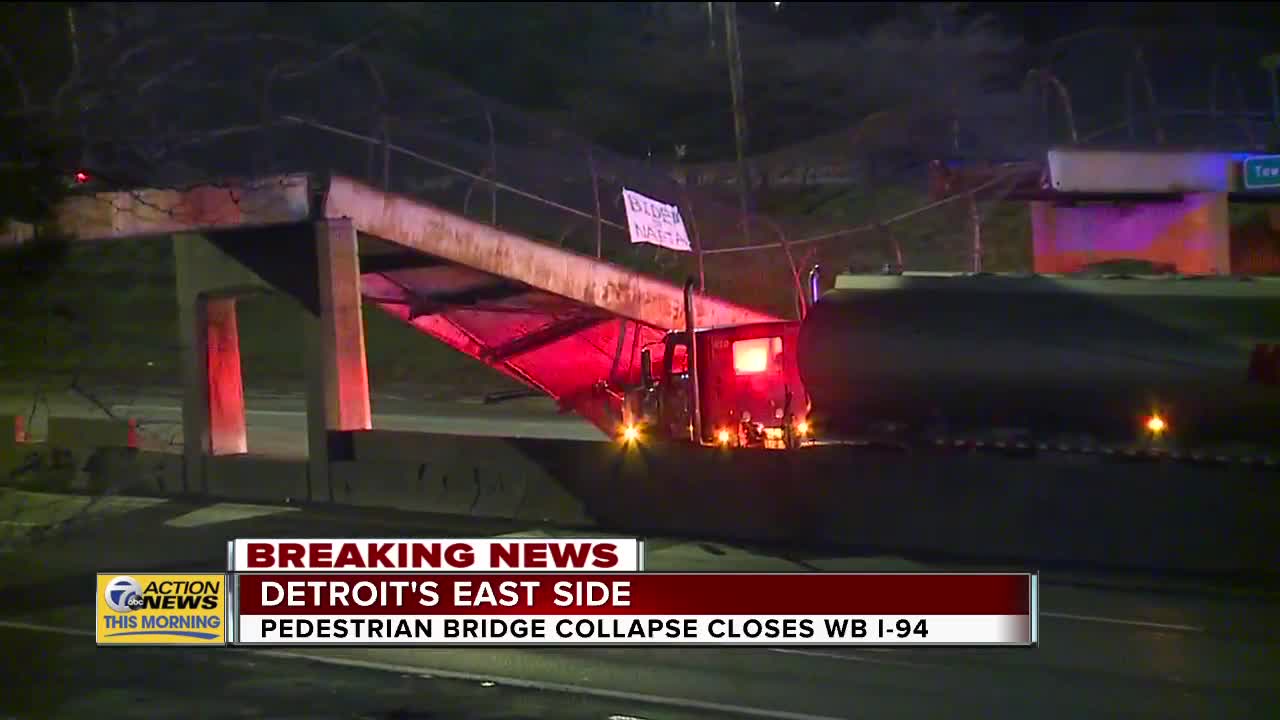 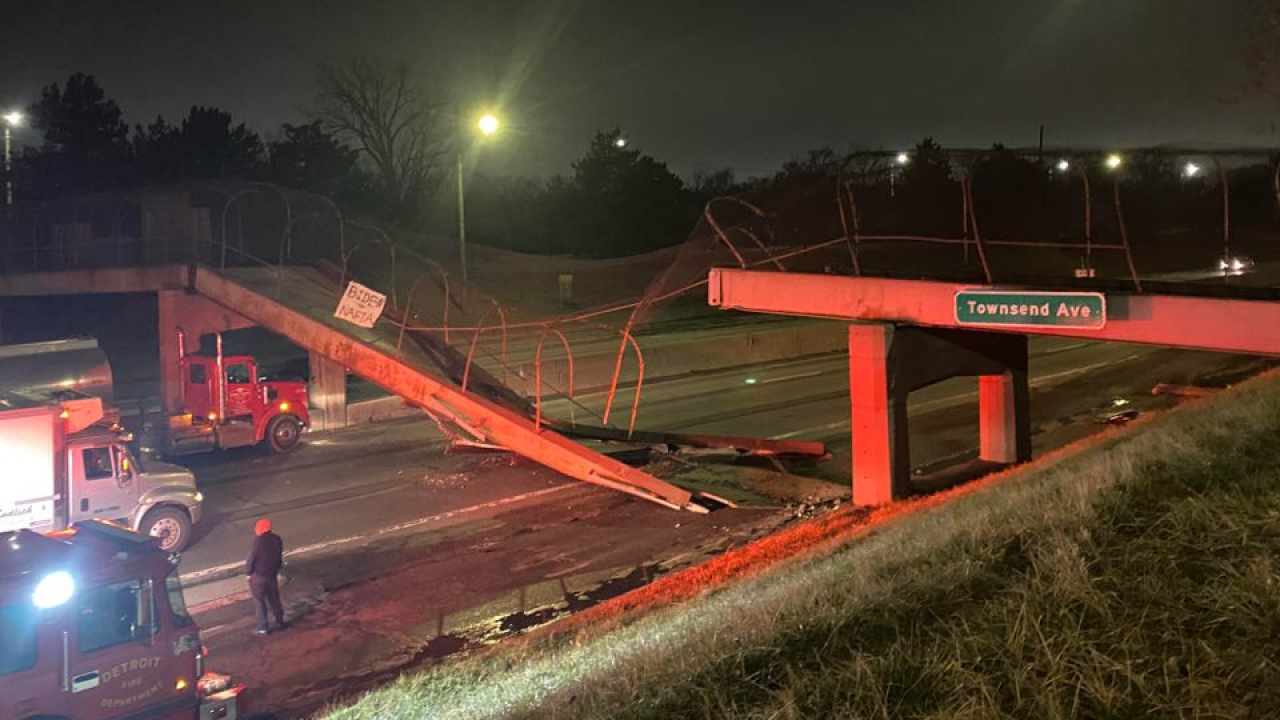 Michigan State Police say they were notified of the Townsend Pedestrian Bridge collapse around 5:20 a.m. Friday.

The collapse happened on westbound I-94 at Mt. Elliott and Townsend.

A truck brought down the bridge, according to Diane Cross of MDOT. The truck did not fit under the bridge, and the collision caused the collapse.

Heads up – 94 closed between Gratiot and Van Dyke to remove the Ped bridge hit by a truck. Equipment moving into place. pic.twitter.com/Mo63aRv9Mr

Road Closure: At approximately 5:20 AM MSP was notified that the Townsend Pedestrian Bridge had collapsed on WB I-94 near Van Dyke. The freeway is completely blocked. The EB side of the bridge is not affected. pic.twitter.com/d1GhbqDdiC

While the eastbound side of the bridge remains intact, MSP says the "whole bridge will need to be removed."

Diane Cross says the department does not plan on rebuilding the bridge, since there were plans to demolish it in a few years as part of the I-94 Modernization project.

Eastbound lanes shut down this morning at I-75 so MDOT could take down both sections of the bridge, MSP tweeted. The completion timeline is to be determined. MSP personnel have cleared the scene.

Right now, both east- and westbound lanes on I-94 are closed. MDOT says vehicles must exit at Van Dyke and can re-enter at E Grand Boulevard. Drivers can also detour using Gratiot to I-75 to I-94.

ANOTHER UPDATE: Going to cost @MDOT_MetroDet $86,000 to demo bridge. Starting around 10 am, highway should be back open before afternoon rush hour @wxyzdetroit https://t.co/ElZUfpHxuJ

No injuries have been reported, according to 7 Action News reporter Ali Hoxie.

Good news, no one injured during the pedestrian bridge collapse on WB 94 near Mt. Elliot. I’m told a truck drove under it and didn’t fit. Bridge will have to be taken down, which means eventually EB lanes will close. No timeline for demolition @wxyzdetroit pic.twitter.com/Y7zDgQuLid