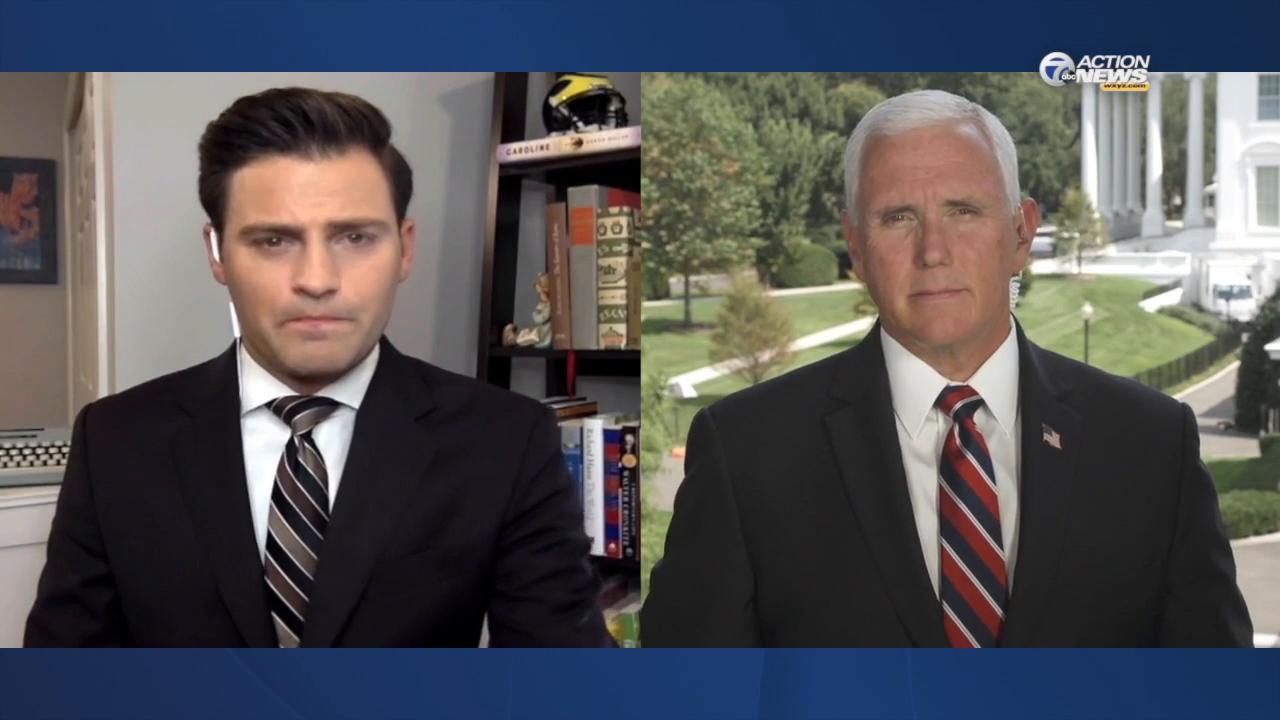 Watch the complete one-on-one interview above and read the full Q&A transcript below.

Abel: Mr. Vice President, thank you for your time.

A lot has changed since we talked last on your bus late last year, including job security for many Americans Mr. Vice President.

A second round of stimulus has thus far stalled in Congress, while many Americans are still desperate for assistance. Can they expect government to come through this time around?

Pence: Brian it is extraordinary to think that at the height of this pandemic that we saw 22 million Americans lose their jobs, but thanks to the foundation that President Trump poured of less taxes, less regulation, more free and fair trade… In four short months, we’ve added 10.6 million jobs back to this economy.

But President Trump and I believe that we need to continue to move forward, to support those policies. Let Americans keep more of what they’ve earned with payroll tax relief, support Americans who are out of work with additional unemployment benefits,

And we’ll continue to call on Congress to work with us to provide additional relief and direct payments to families and direct support for businesses in programs like the paycheck protection program.

We’re getting there. We’re opening up America again. We have an American comeback underway but President Trump and I are absolutely committed to be there for families and for businesses that are standing back up in the wake of this pandemic and we’re going to work every day to put this coronavirus pandemic in the past and to bring American all the way back.

"We’ll continue to call on Congress to work with us to provide additional relief and direct payments to families and direct support for businesses in programs like the paycheck protection program."
-@VP on stalled 2nd stimulus package pic.twitter.com/jhCYHVUte9

On The Atlantic piece:

Abel: Over the weekend Secretary Wilkie said he’d be offended if the comments by the President reported in the Atlantic saying he used derogatory terms towards service members were true.

I know the White House says that actions speak louder than words, but does what someone says behind closed doors speak to someone’s character?

Pence: Brian, I spoke to President Trump the day the trip to Belleau Woods in France was cancelled.
And despite the assertions in that liberal magazine, the Atlantic, everyone has now confirmed, all those present, that it was as what I heard that day, that it was a bad weather call.

The president couldn’t travel there. So the very core assertion of that article was, has been discredited.
Frankly, the suggestion that the President, who I’ve served with every day, for the last 3 and a half years, who I know reveres the men and women of our armed forces as no other American I’ve ever met, the very idea that he would make those kind of statements is absurd on it’s face.

The truth is you look at the record of this administration. Largest increase in our military since the days of Ronald Reagan, reformed the VA, expanded veterans choice to every veteran in America. We ended decades of scandal at the VA and we’re finally giving our soldiers, sailors, airmen, marines and coastguard the resources and support they need to accomplish their mission.
But beyond that Brian, I can tell ya. I have walked at Arlington National Cemetery at President Trump’s side. I have seen him console families at Dover Air Force base when our fallen heroes come home. I can tell ya this president, our Commander-In-Chief respects and loves our armed forces.

Abel: Mr Vice President last question we have time for, I want to talk about Michigan’s economy for a minute because I know it’s a key part of this campaign. Ivanka Trump visiting GM just last week and you point to success here in Michigan…

I want to hear what you tell the auto worker whose lost their job before the pandemic because there was a net loss in this sector,
And then also with Michigan being such a battleground, you’ve been here multiple times, the president will be here on Thursday, Joe Biden will be here tomorrow.

I just want to get your insight into the president’s visit as well and respond to the former VP’s scheduled stop.

Pence: Well the people of Michigan voted to put President Trump in the White House in 2016. And I have every confidence that hard working Michiganders are going to vote for four more years for President Donald Trump.
Look, before this coronavirus pandemic struck, this president fought for American jobs and American workers.
We not only cut taxes, rolled back excessive regulation of the last administration, but President Trump fought for the kind of trade deals that put American jobs and American workers first.
We all know what happened in the years after NAFTA was signed into law. We literally saw 60 thousand American factories close in the wake of NAFTA.

President Trump told the people of Michigan we could do better. We renegotiated our trade relationship with Mexico and Canada. And the USMCA is now the law of the land and it has very specific protections for automotive workers and automotive jobs in the United States. It’s a huge win for autoworkers in Michigan. It was a huge win for jobs and American farmers.

And it truly is remarkable to think that after Joe Biden defended NAFTA for all of those years, his running mate, Senator Kamala Harris, actually voted against the USMCA in the United States Senate.

She was one of only 10 members of the senate to oppose the USMCA even though it was a clear win for auto workers and manufacturing workers all across Michigan.

So I think you look at the record, you look at a record of job creation in our first three years that saw seven million Americans find work.
You saw 500,000 manufacturing jobs created. I think the people of Michigan know to keep this economy growing, to bring our economy all the way back, we need four more years of President Donald Trump in the White House and I know Michigan is going to vote just for that come Nov. 3.