Man killed in shooting not involving police, several arrests made at large protest in Detroit 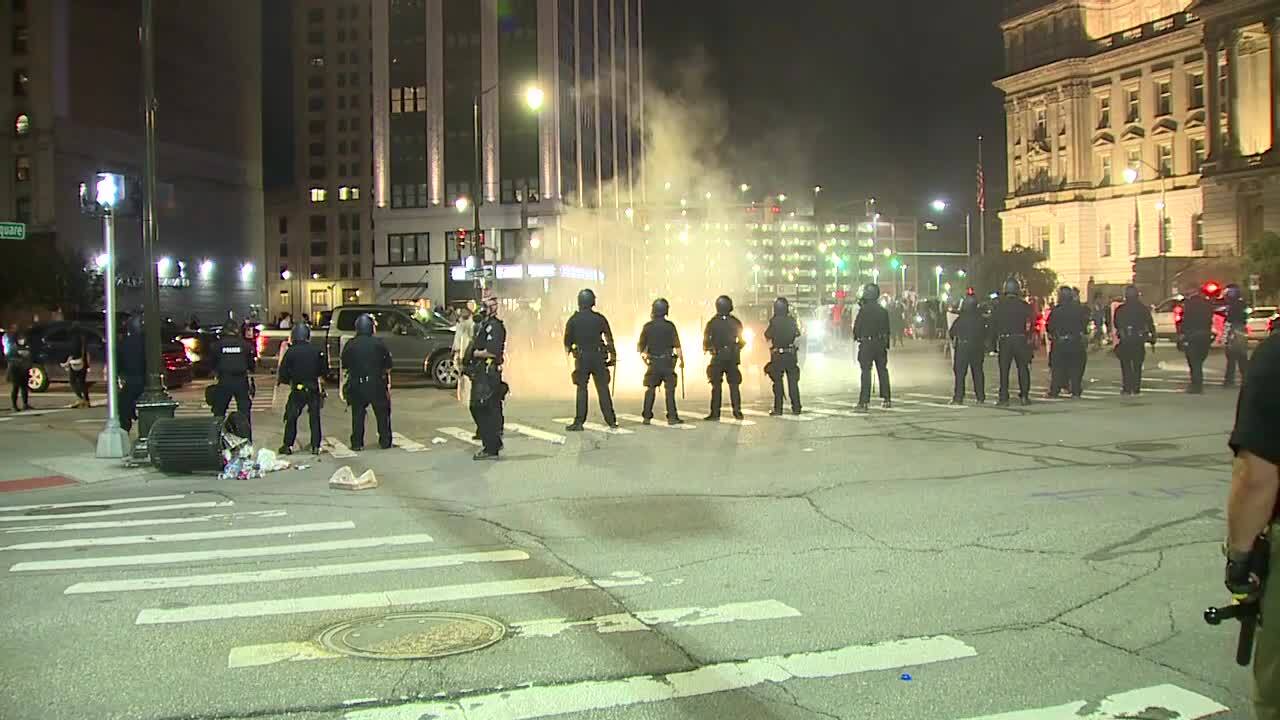 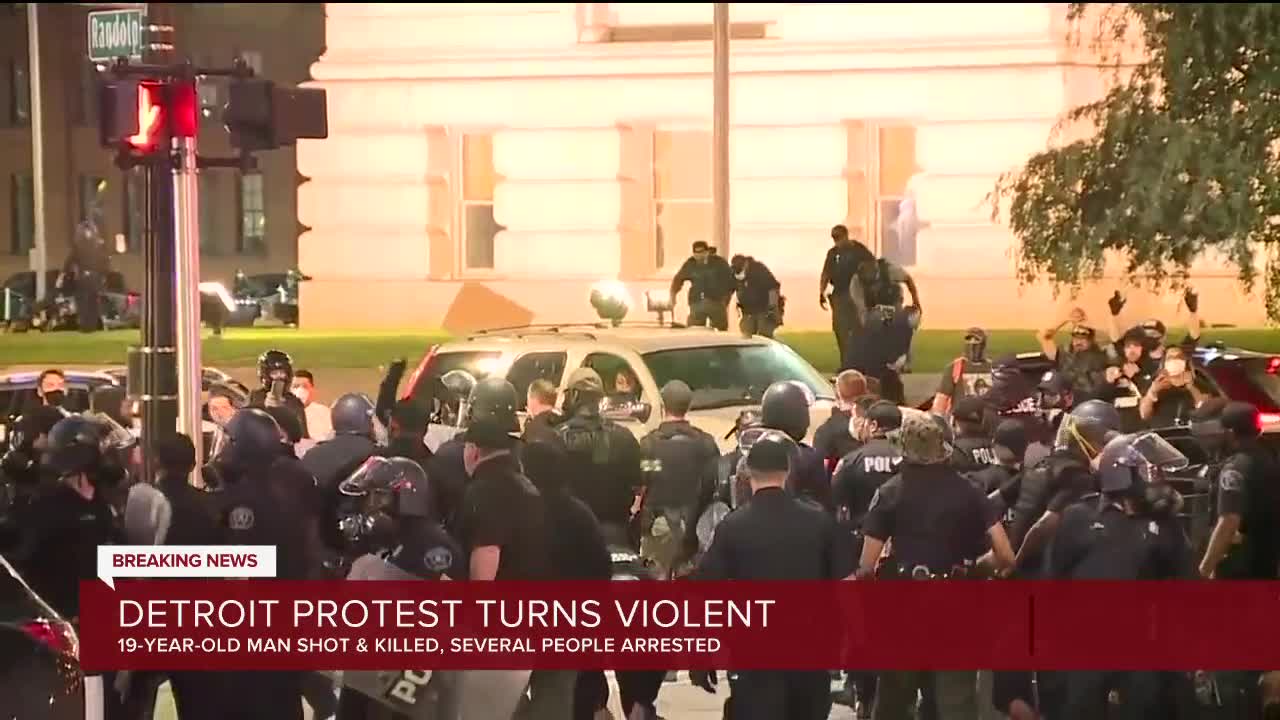 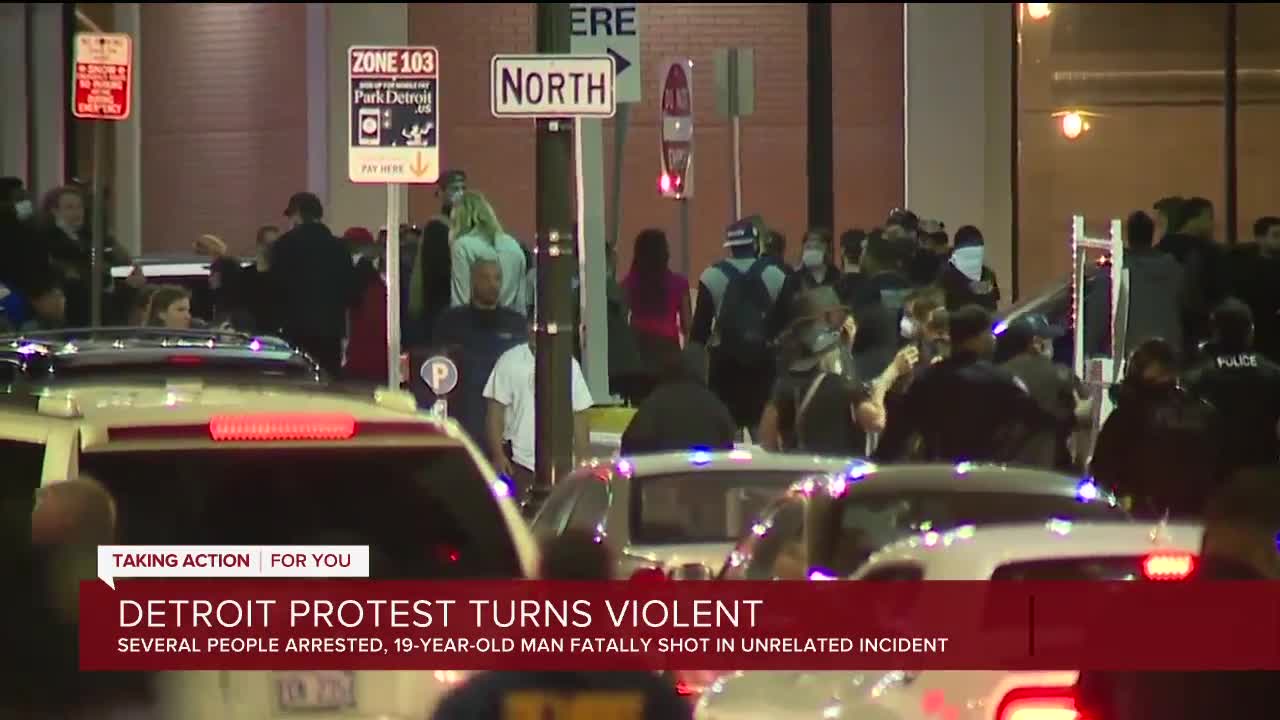 DETROIT (WXYZ) — One person was killed as hundreds of people gathered in downtown Detroit on Friday night as part of nationwide protests over the killing of George Floyd in Minneapolis this week.

The shooting did not involve police, but after reviewing surveillance video, the Detroit Police Department is saying the shooting was targeted.

DPD says around 11:30 p.m., the 21-year-old victim from Eastpointe was sitting in the driver's seat of a parked silver Dodge Caliber along with two other male passengers, when an unknown male suspect approached the vehicle and fired shots into it.

All occupants of the vehicle, including the victim ran from the vehicle and at some point the victim was shot, according to Detroit police.

The suspect then also ran away in an unknown direction. This happened in the area of Congress and Randolph.

The 21-year-old victim was pronounced dead at the hospital. Police say the investigation is ongoing, and anyone with information is asked to call Crime Stoppers at 1-800-SPEAK-UP.

At least 9 people have been taken into custody. However, 7 Action News crews are seeing more people being led away in restraints.

In response to the protesting, Governor Gretchen Whitmer and Lt. Governor Garlin Gilchrist said they stand in solidarity with those "seeking equitable justice for everyone in our state."

People in communities of color across the nation and right here in Michigan are feeling a sense of exhaustion and desperation. We stand in solidarity with those who are seeking equitable justice for everyone in our state. Full statement below ⬇️ pic.twitter.com/2o72jikTPO

Wayne County Prosecutor Kym Worthy released this statement on the Detroit demonstrations against the murder of George Floyd:

As my office starts to receive more information about some of the instances of violence from last night’s protests, it is important to note that an overwhelming number of people were engaged in peaceful protest. The death of George Floyd is something that has profoundly affected our nation. Peaceful demonstrations with respect for all is absolutely warranted in this situation. The point of protesting what happened to Mr. Floyd can be lost when violence becomes the narrative of the protest. I urge everyone to continue to honor Mr. Floyd by engaging in safe, peaceful and civil protest of his murder.

“The death of George Floyd has poured additional salt into the already open and unhealed wounds of brutality and racism faced by so many of us in the African American community. We need a safe place for people to peacefully express their understandable anger and frustration over the systemic inequality people of color continue to face in the United States and the clear lack of impetus towards systemic solutions. We give “lip service” to the problems and issues but not much more.

Yesterday, tens of thousands of people of all races and ethnicities gathered in cities across America to peacefully protest. In many cases, both protesters and law enforcement worked to de-escalate situations before they turned violent. I commend both for their restraint.

Some of those protests were marred by violence, I am told, started by a small number of agitator’s intent on physical confrontation with law enforcement. In Detroit, we saw violence result in the shooting death of a young man on our streets. The problem is systemic inequality and shooting does nothing to cure that ill.

We can spend our time critiquing the litany of tragic events that now include Mr. Floyd or we can spend that time advocating strongly for the systemic changes we need, want and deserve as fully vested citizens of this country.”

Around 11:45 p.m., police began shooting tear gas into the crowd.

Just after midnight, police started taking people into custody as they called it an unlawful gathering.

After protests earlier in the day, police say nine people have been arrested so far as part of the protests at night along Jefferson Ave. in downtown.

The protesters were forced back by police down Randolph St. and several people were seen being arrested on video.

Police are in riot gear as they work to push the protesters back again and disperse them.

Detroit Police Chief James Craig spoke earlier in the night the protest was going on.