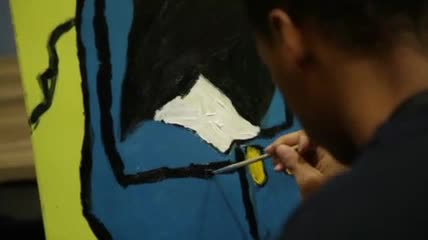 Plymouth artist is giving back to youth through art

Tony Roko is an artist with a signature style. He paints Detroit’s industrial past with a brilliant, vivid contemporary palette.

His parents immigrated from Montenegro - spent 3 years in a refugee camp in Italy and eventually raising the family in Plymouth.

“So, I started on the assembly line when I was nineteen. My parents were immigrants. That was probably the equivalent to the first PHD in the family ‘Tony got a job with Ford,’" said Roko.

His income helped his family, but he always stayed true to his passion.

“Because I was still an artist, I was sketching on my breaks and the UAW and Ford took note of my abilities,” said Roko.

“They pulled me off the assembly line to create these murals to boost company morale,” said Roko.

“The train station will be one of the places my piece will be hung,” said Roko. “I’m painting a train conductor for that,” said Roko.

Chief Meteorologist met up with Tony Roko's at his Plymouth studio.

“This struck me as soon as I walked in the door,” said Dave Rexroth.

“A lot of these images and this imagery is sort of reflective of life struggles, fights, battles”, said Roko.

“You’re helping kids that have some of those issues too," said Rexroth.

Art Foundation is a non-profit providing art education in schools and juvenile facilities in southeast Michigan.

“In many cases these kids have never created before and we get them to really reach down,” said Roko.

Their pilot program went into a juvenile justice system and worked one on one with struggling teens.

“We’ve worked with kids that were self-isolating and wouldn’t even talk to their therapist,” said Roko.

“The therapist then the social worker then changed his rehabilitation program to include art,” said Roko.

The classes leave a lasting impression on canvas and in their hearts giving them hope.

In December, Wayne County sold one of two vacant historic industrial mills to the non-profit.

The mills located on Hines Drive in Plymouth were donated by Henry Ford to the county and for 70 years the mills were neglected becoming eye sores.

“One of the very few that was built by Albert Kahn designed by Thomas Edison,” said Roko.

Wayne County will use the money to reinvest in Hines Park.

“It will be my personal studio, but it will also be the headquarters of the Art Foundation. We’re going to transform the sight into a park,” said Roko.

“So it kind of became my mission to really support these kids that otherwise don’t have a lot of support,” said Roko.

Tony Roko is strengthening his own Plymouth community by giving back through his love of art.