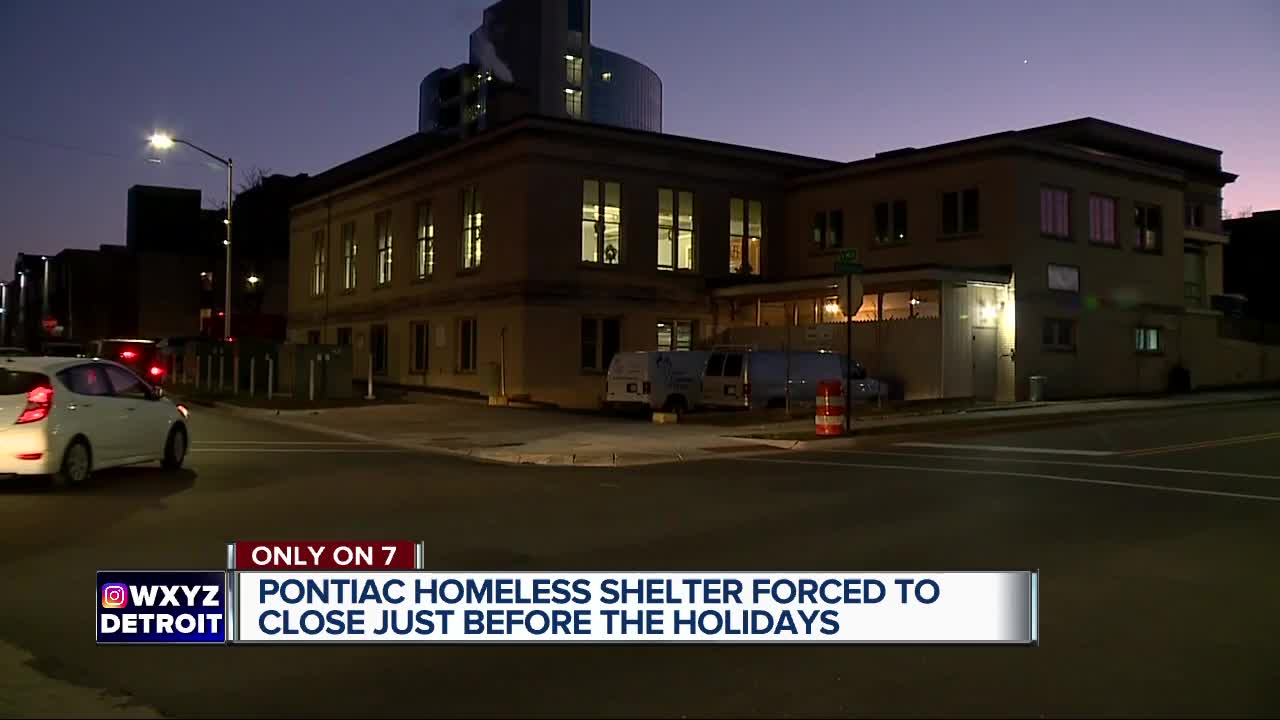 A homeless shelter in the heart of downtown Pontiac is shutting its door just days before Christmas due to budget restraints.

PONTIAC, Mich. (WXYZ) — An emergency homeless shelter program in the heart of downtown Pontiac is shutting its door just days before Christmas due to budget restraints.

Grace Center of Hope will close the emergency shelter on Dec. 21. There are no plans for it to reopen at this time.

The faith-based nonprofit organization provides shelter for the homeless and programs for those battling addiction. The surprise announcement was delivered to residents at the shelter two weeks ago.

According to the organization, only the emergency shelter program within Grace Centers of Hope is closing.

The organization itself will stay open as well as the other programs they have.

"We are diligently working with all eight remaining emergency shelter participants to make sure they each receive appropriate shelter and support as a result of this program closure. All participants have been offered the opportunity to participate in our One Year Life Skills Program, which provides long-term care for the homeless and addicted," they said in a statement.

A woman with children living at the shelter wanted to remain anonymous because she fears retaliation for speaking out against the organization.

"We've even asked to stay the day after Christmas," she said.

The challenge she claims is finding another shelter to welcome her family.

Moments ago, a woman appeared with a bag of items at the shelter. In 72 hours, it will close for good.

We spoke to a shelter resident and the pastor about the closing.

We also told the mayor of Pontiac who was not aware.

Our story airs at 11 on @wxyzdetroit pic.twitter.com/ObVazb5Hpn

"The resources they've given us to call in the Tri-County area are full or have a waitlists that doesn't open until January or February," she said.

Pastor Kent Clark is the CEO of Grace Center of Hope. He sat down with 7 Action News to explain what he calls an unfortunate and difficult decision.

"To be right of upfront with you," he said. "I so regret that just before Christmas this broke. It would have happened because of budget restraints not because we don't care for emergency care people."

The budget shortfall is $600,000 and the nonprofit does not accept government funding. Clark said they remain committed to their addiction programs.

"It does hurt me," Clark said. "I want the word out that Grace Center of Hope is not just about serving meals and a night to stay."

Two employees at the shelter will transition to new positions, according to the pastor. He adds that no one at the shelter now will be forced out on the streets.

Grace Center of Hope has been committed to the community since 1942.

Read a statement from Pastor Clark below:

Based on decades of experience helping the homeless and addicted, we recognize the tremendous value of providing long-term support and resources to help move individuals from the streets to mainstream society. And as a nonprofit organization that accepts no government funding and relies heavily on the generosity of our donors, we are always seeking ways to best utilize our resources in order to have the greatest impact.

As a result, we will instead focus our efforts on our One Year Life Skills and Two Year After Care programs that have helped participants maintain their sobriety, earn a GED, apply to college, regain custody of their children, and even become homeowners. We also remain hopeful in this giving season that the community will continue to offer their support to help us reach our fundraising goal, recognizing that our programs and services have been a force for good in southeast Michigan for many years.”