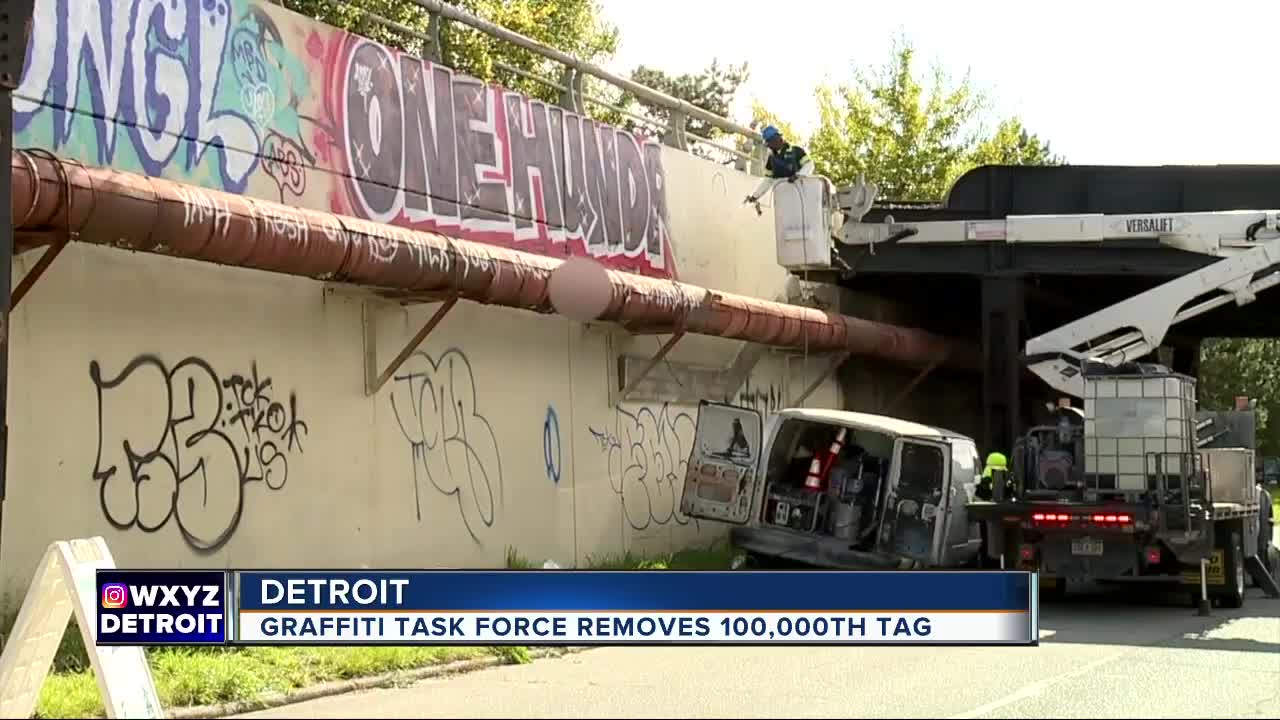 The city of Detroit’s Graffiti Task Force removed its 100,000th graffiti tag Thursday as part of an initiative that started in 2014 to eliminate blight and promote beautification in public spaces.

DETROIT (WXYZ) — The city of Detroit’s Graffiti Task Force removed its 100,000th graffiti tag Thursday as part of an initiative that started in 2014 to eliminate blight and promote beautification in public spaces.

Artist Sheefy McFly joined city leaders at the Holden Viaduct just below the John C. Lodge Freeway for the tag removal, which will make room for the Holden mural McFly has been commissioned to create.

McFly is a resident artist with Detroit's City Wall Program. They paint over graffiti tags to make room for commissioned murals. Since the program kicked off, there have been more than 40 murals commissioned.

He's teaming up with Recycle Here! for this latest project, which he's set to begin painting in the spring.

Today, Detroit's Graffiti Task Force removed it's 100,000th tag to make room for a commissioned mural like the ones you see below. The Task Force has been working to remove graffiti from public spaces since 2014 @wxyzdetroit pic.twitter.com/kCw31uKdSS

“It’s a good way for artists that used to make murals outside to get compensated to beautify a neighborhood," said Matthew Naimi with Make Art Work & Recycle Here!

McFly told 7 Action News that participating in the program has allowed him to share his work with the community.

“Us muralists are really trying to show them it’s a way to do it legally," McFly said

Much of the graffiti painted over to create a blank canvas for McFly has been there for years. For some, it’s a mark of the neighborhood.

“All of the murals and public art work are sort of innately temporary," said Zak Meers, with City Walls Detroit.

He said from the City's standpoint, graffiti versus art comes down to whether or not the artist has permission.

McFly is hoping to have his project complete by next winter, if weather permits.