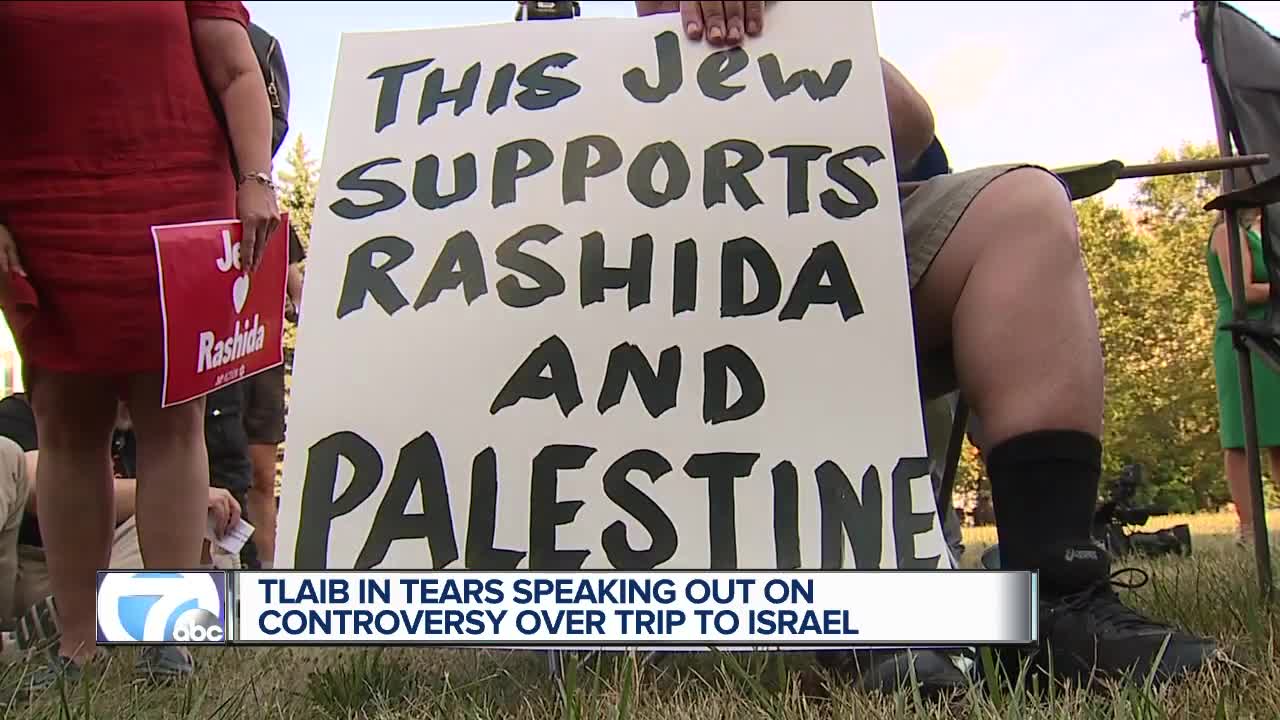 An emotional Congresswoman Rashida Tlaib spoke to supporters in Detroit Friday, following her decision not to travel to Israel to visit her 90-year-old grandmother in the occupied West Bank. 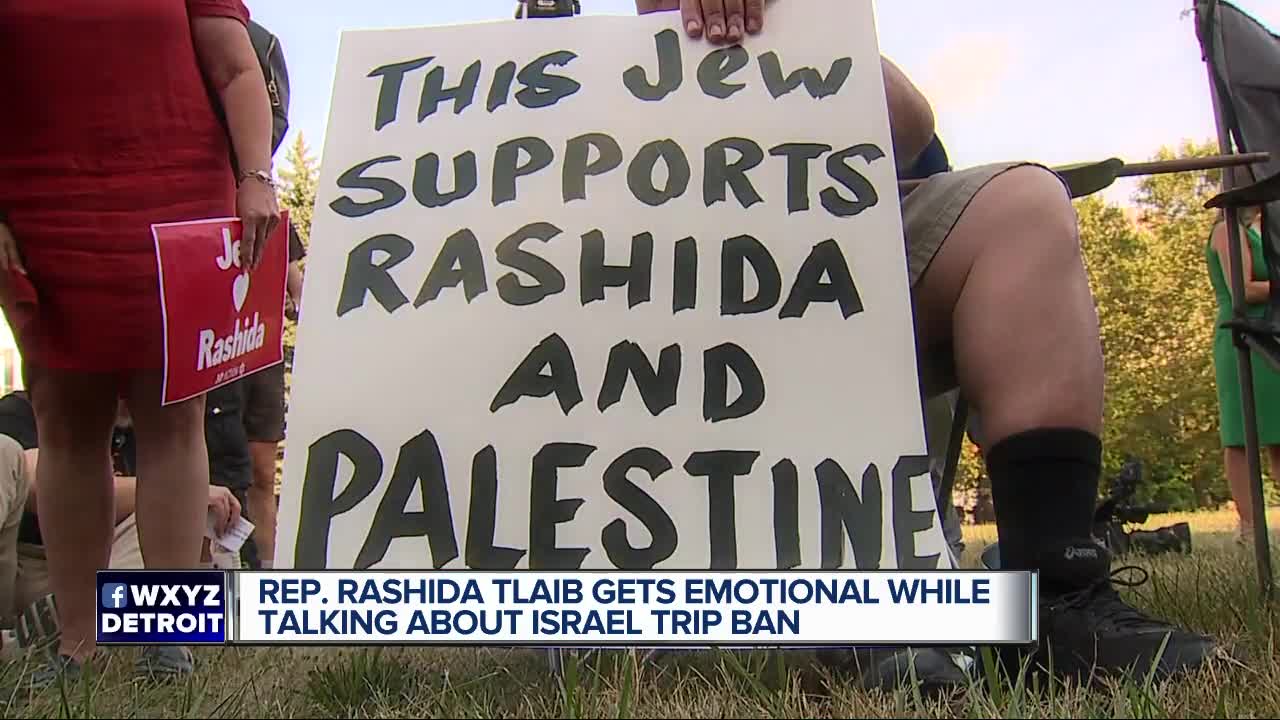 DETROIT (WXYZ) — An emotional Congresswoman Rashida Tlaib spoke to supporters in Detroit Friday, following her decision not to travel to Israel to visit her 90-year-old grandmother in the occupied West Bank.

“I should be on a plane to see her," the Democratic Congresswoman from Detroit said.

Despite Israeli government approval for a visit to see family, Tlaib declined, stating the conditions placed upon her by the Israel government would oppress her free speech.

“There were demands of me to basically silence me," the Congresswoman told Action News, referencing a conditions letter she'd need to sign to make the trip.

Tlaib has been a vocal critic of Israel, calling it's policies toward the Palestinian people "oppressive and racist."

President Donald Trump has bashed Congresswoman Tlaib and Congresswoman Ilhan Omar of Minnesota on Twitter, tweeting: "Representatives Omar and Tlaib are the face of the Democrat Party, and they HATE Israel!"

The President also tweeted: "Israel was very respectful & nice to Rep. Rashida Tlaib, allowing her permission to visit her "grandmother." As soon as she was granted permission, she grandstanded & loudly proclaimed she would not visit Israel. Could this possibly have been a setup? Israel acted appropriately!"

Many of Tlaib's supporters who gathered in Detroit Friday at Pallister Park are Jewish, like Reuben Telushkin with the Jewish Voice for Peace, a national group seeking "an end to the Israeli occupation of the West Bank, Gaza Strip, and East Jerusalem."

“There’s lots of Jews who do not agree with the actions of the State of Israel, who not do feel represented by Israel and resist the attempts to conflate the State of Israel with their Judaism. It’s two separate things," Telushkin said.

She was called out by the Israeli Interior Minister Aryeh Deri via Twitter after canceling her trip. Referencing an earlier letter from Tlaib, where she writes she will “respect any restrictions and will not promote boycotts against Israel” during the visit, the Minister said he granted her request, only to then have her change her mind based on the conditions.

Some feel Tlaib is grandstanding, one Channel 7 viewer tweeting “A granddaughter would choose her Grandmother over her activism.”

"That this could happen to her, to keep her from her grandmother as a citizen is reprehensible. But she's a U.S. Congressperson It's unbelievable. And I think she's making the right choice obviously," said Tlaib supporter Laura Tas.

Tlaib said the conditions letter from Israel goes against her values.

Read Congresswoman Tlaib's full statement on her decision below:

"In my attempt to visit Palestine, I’ve experienced the same racist treatment that many Palestinian-Americans endure when encountering the Israeli government. In preparation for my visit, my grandmother was deciding which fig tree we would pick from together, while Palestinians and Israelis who are against the illegal military occupation were looking forward to Members of Congress finally listening to and seeing them for the first time. The Israeli government used my love and desire to see my grandmother to silence me and made my ability to do so contingent upon my signing a letter – reflecting just how undemocratic and afraid they are of the truth my trip would reveal about what is happening in the State of Israel and to Palestinians living under occupation with United States support.

“I have therefore decided to not travel to Palestine and Israel at this time. Visiting my grandmother under these oppressive conditions meant to humiliate me would break my grandmother's heart. Silencing me with treatment to make me feel less-than is not what she wants for me – it would kill a piece of me that always stands up against racism and injustice.

“When I won the election to become a United States Congresswoman, many Palestinians, especially my grandmother, felt a sense of hope, a hope that they would finally have a voice. I cannot allow the Israeli government to take that away from them or to use my deep desire to see my grandmother, potentially for the last time, as a political bargaining chip. My family and I have cried together throughout this ordeal; they’ve promised to keep my grandmother alive until I can one day reunite with her. It is with their strength and heart that I reiterate I am a duly elected United States Congresswoman and I will not allow the Israeli government to humiliate me and my family or take away our right to speak out. I will not allow the Israeli government to take away our hope.

“Racism and the politics of hate is thriving in Israel and the American people should fear what this will mean for the relationship between our two nations. If you truly believe in democracy, then the close alignment of Netanyahu with Trump's hate agenda must prompt a re-evaluation of our unwavering support for the State of Israel. The denial of entry of a congressional delegation is not only about Congresswoman Omar and I, but also about the deep-rooted racism within Israel that is taking us further away from peace. The Israeli and Palestinian people need us to be more courageous and to be honest brokers of peace. Being silent and not condemning the human rights violations of the Israeli government is a disservice to all who live there, including my incredibly strong and loving grandmother.

“This type of oppression is painful for all humanity, but it is especially painful for me personally every time I hear my loving family members cry out for the freedom to live and the right to feel human."