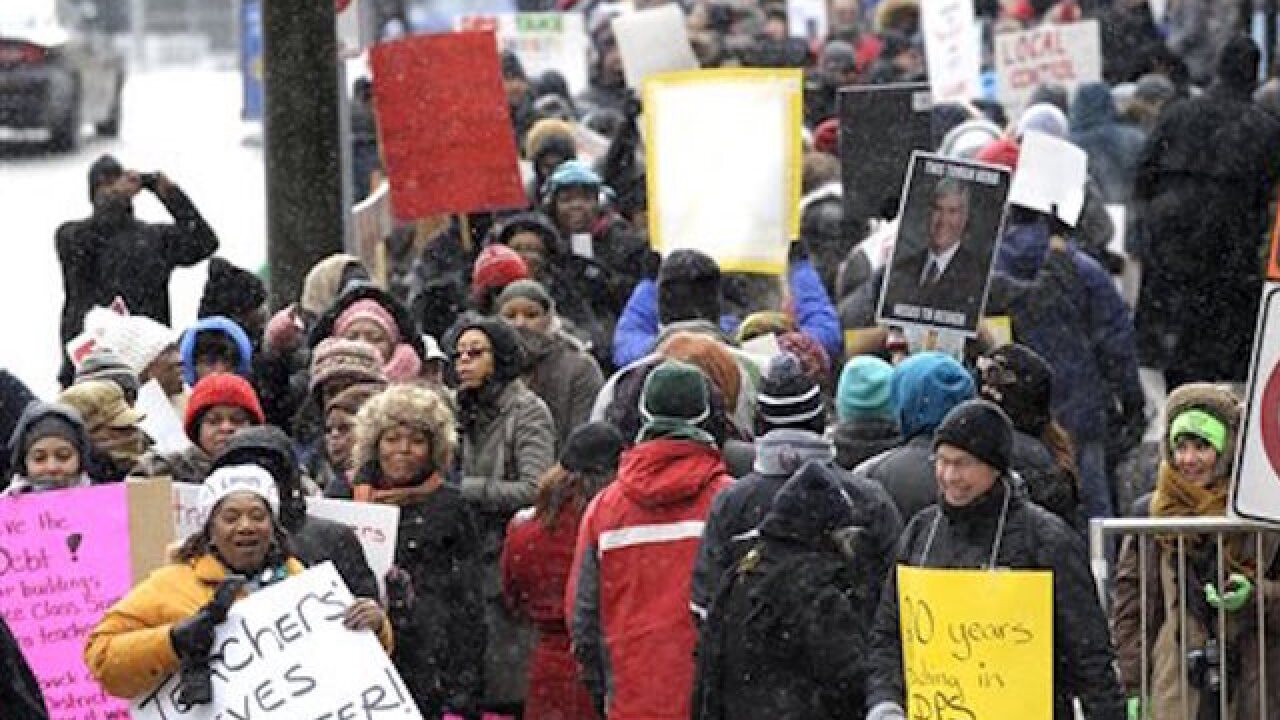 Todd McInturf
<p>Burton International Academy computer advanced teacher Denice McGee, bottom left, holds a sign as she and other protesters wait to cross the street Wednesday, Jan. 20, 2016, in Detroit. Most of Detroit's public schools closed for the day on Wednesday due to teacher absences, as disgruntled educators stepped up efforts to protest the governor's plans for the district, its ramshackle finances and dilapidated buildings. (Todd McInturf/Detroit News via AP) DETROIT FREE PRESS OUT; HUFFINGTON POST OUT; MANDATORY CREDIT</p> 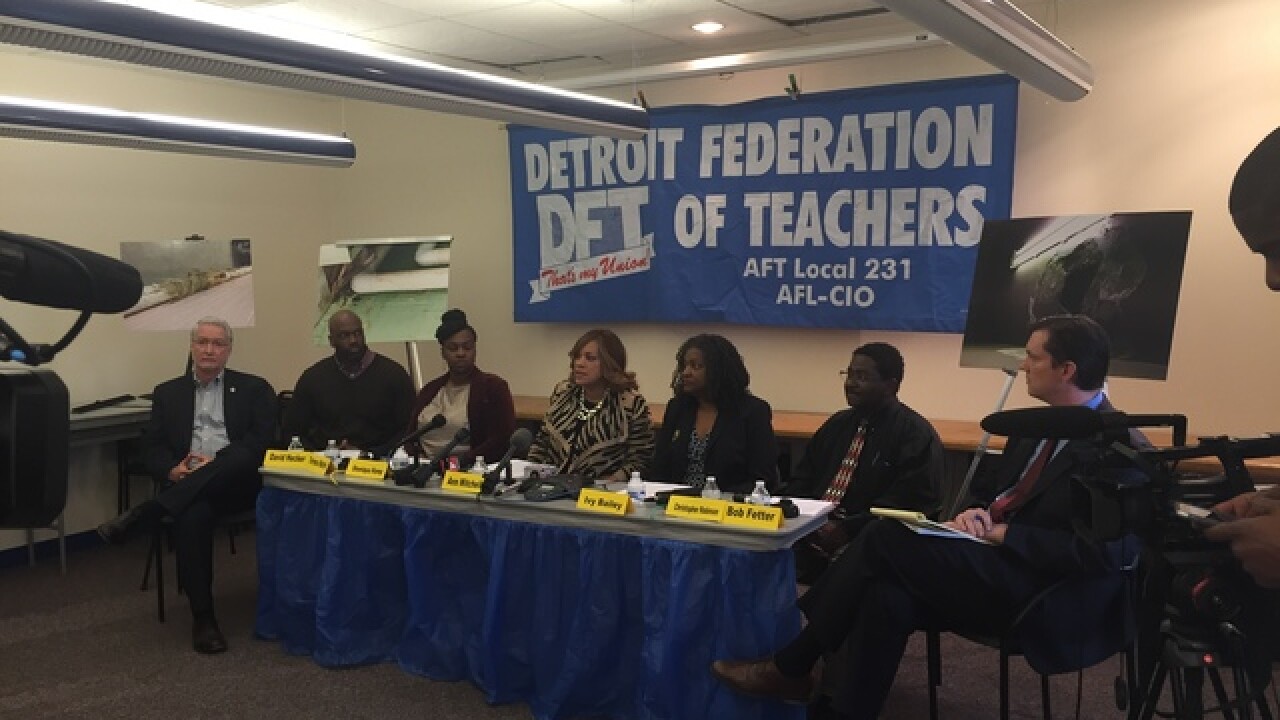 Parents of students and some students are also named as plaintiffs in the lawsuit against DPS and Earley.

According to the lawsuit, DPS “has not performed its duty to its students, parents, teachers and community to provide a minimally adequate education and to properly maintain the schools.”

The lawsuit said DPS and Earley have allowed the condition of some schools to “deteriorate to the point of crisis” and “forced Detroit’s school-age children to spend their young lives in deplorable surroundings risking their health and safety in the process.”

7 Action News has been reporting on the conditions in DPS schools for months, and in an interview with Earley earlier this week, he pointed out the story exposing conditions in one school was not news to him.

“People have known about the condition of Spain (Elementary School),” Earley said. “This did not just happen overnight.”

The lawsuit also said, “It is not a surprise that due to this, and other reasons, including budget cuts and mismanagement, that DPS is in dead last in academic performance with a majority of its students being left behind the rest of the country."

Last week, the city of Detroit posted the inspection reports from 11 schools from Jan. 12 to Jan. 17.

Each school inspected was found to have multiple violations. Nine schools had damaged or falling ceiling tiles while five schools had a rodent problem. Four had leaky roofs and three had heating issues.

The complaint also features statements from teachers at the school with the bad conditions.

“At Carleton Elementary, Teachers posted pictures showing water damage and pieces of tile coming loose and falling off the ceiling,” the complaint states. “One teacher reported the debris striking a student in the head during testing.”

Other examples include pictures of rodent droppings at Dossin and bathroom equipment that doesn’t work at Osborn.

Also mentioned in the complaint is Detroit Mayor Mike Duggan who was on the tour of the schools.

“After that tour, Mayor Duggan was quoted describing what he had witnessed: ‘I saw 4-year-olds in a classroom where it was about 50 degrees. They told me they usually wear their coats until lunchtime when the warm up a bit,’” the complaint stated. “The Mayor also found a dead rodent and a severely warped gym floor that students were forced to utilize.”

With the lawsuit, DFT is hoping that the court will remove Earley from his duty as emergency manager and restore local control over DPS. Also, they want the court to force DPS to perform periodic inspections, investigate complaints filed by parents and teachers and fix all code violations found by the city of Detroit.

On top of that, the plaintiffs also want DPS to “develop and institute a capital plan that provides the students of Detroit 21st century schools in which parents would want to send their children and educators would want to teach.”

Approximately one year ago, I accepted the Governor’s appointment as Emergency Manager for Detroit Public Schools with the clear goal of being the last Emergency Manager appointed to DPS. The focus of my work has been on preparing DPS for long-term financial sustainability and a return to some form of local control.

My team and I have worked hard to develop and implement a comprehensive restructuring plan that has taken a financially broken educational system and transformed it into one that, but for its long-term debt, has eliminated it structural budget deficit. This is evident from the District’s FY2015 audit report, which documents the fact that if the annual $56 million in debt payments were resolved, the District would be able to operate within its projected revenues.

That is the role of an Emergency Manager.

We have achieved that objective, and now it is critical that the Michigan legislature invest the critically necessary funds in the new Detroit Public School system that have been proposed in Gov. Snyder’s education reform plan.

The issue of the disrepair of some of the District’s buildings and a plan to address that is before the legislature. The investment of these funds will be necessary to implement a badly needed, districtwide long-term capital improvement plan.

Meanwhile, we continue to address those matters that have been presented in the inspection reports from the City, and have been made aware of through our work order system, through a corrective action plan that provides available resources for these repairs.

We are committed to ensuring that our students and staff have a safe working and learning environment, and that is a part of the discussion regarding the critical financial investment into the new Detroit Public School System that is before the Michigan legislature.

You can read the entire complaint below: