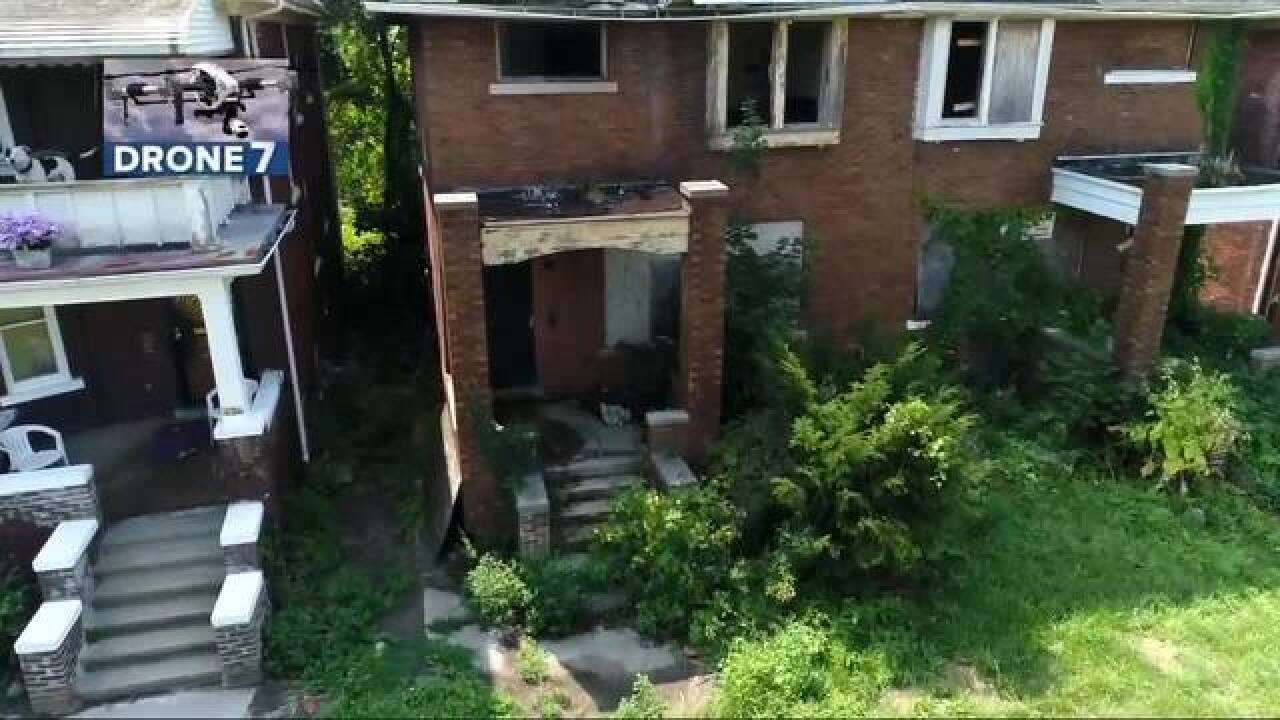 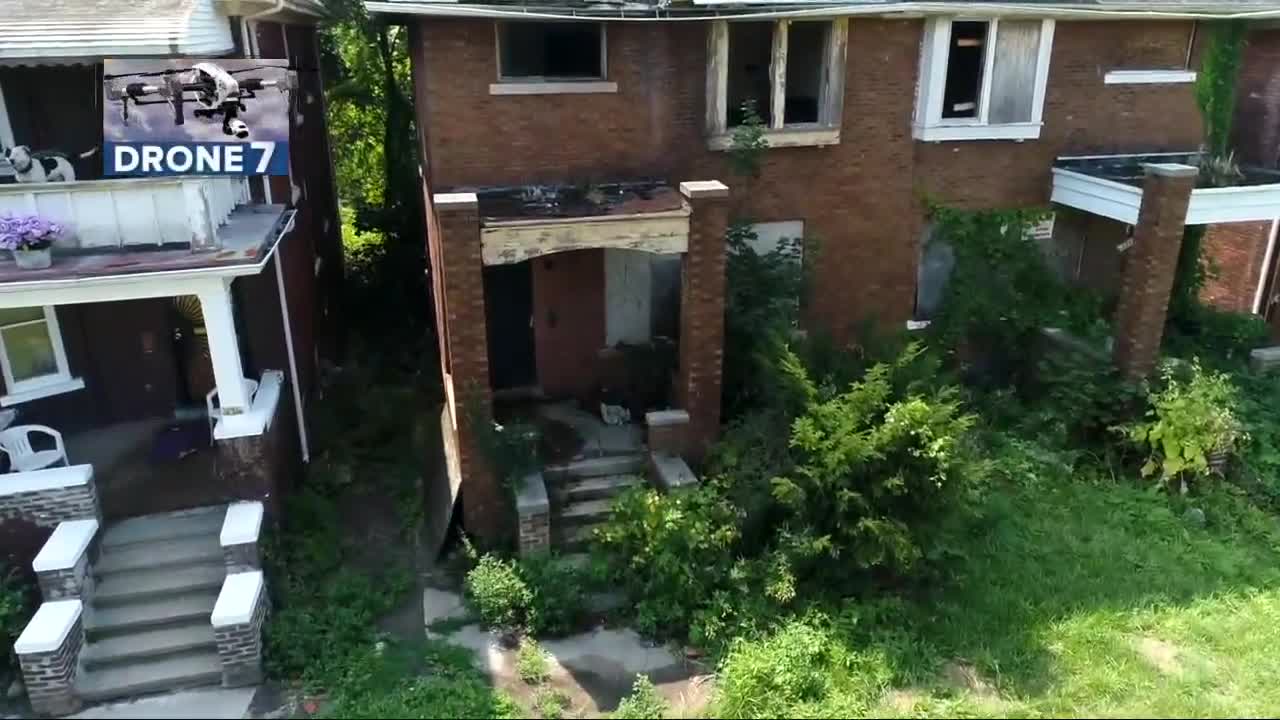 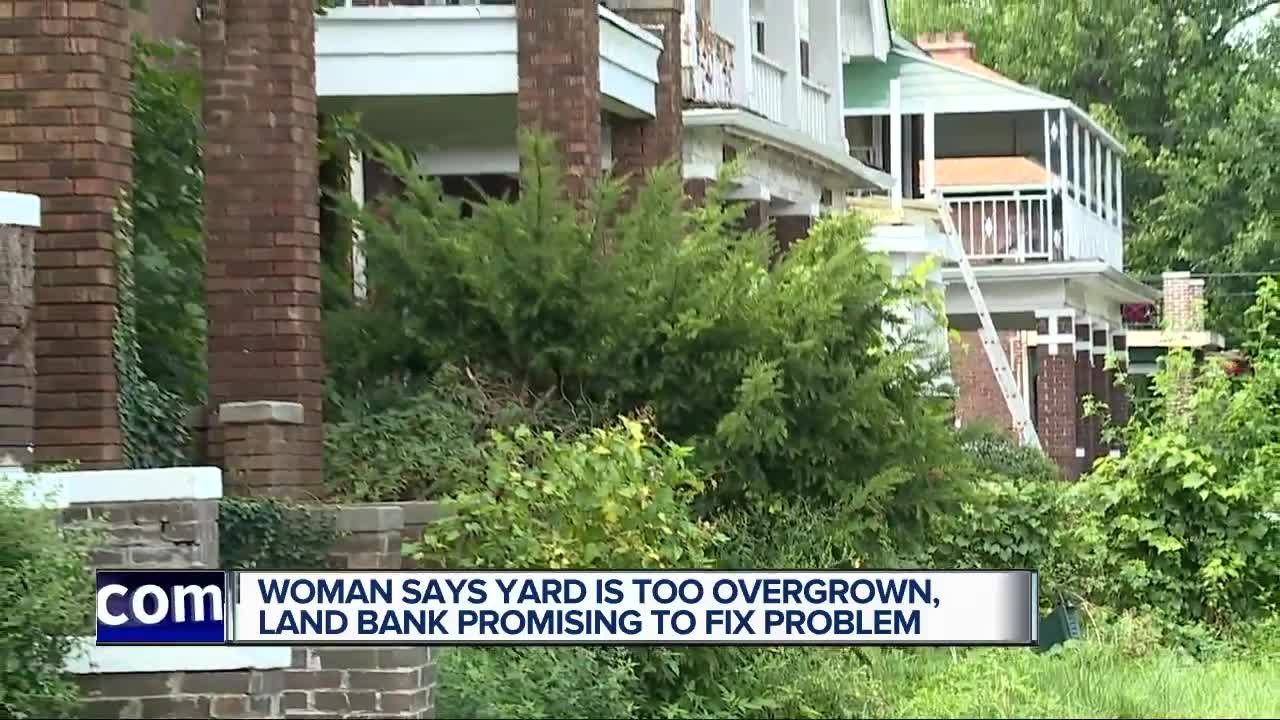 UPDATE: The homeowner gave reporter Matt Smith a call Saturday morning and told him seven trucks and 21 workers "descended onto this block like bees" to start tearing down the overgrown bushes next door.

The woman says the crew worked for a few hours, removed several trees, but eventually gave up. The crew said they did not have the tools to take on all the shrubs and needed to bring in the forestry department to finish up the job.

A viewer contacted 7 Action News complaining of a real-life Jurassic Park growing next to her home complete with a beast.

The woman — who declined to be identified on camera — had a scar on her finger where she said a stray dog bit a portion of her finger off.

Eventually, doctors at Henry Ford Hospital were able to re-attach it.

She said a dog hiding in the thick brush, and overgrown trees did the damage last year, and despite numerous phone calls to get the overgrown mess cleaned up, she couldn’t get anyone to her home to fix the problem.

The vacant city-owned property was so overgrown this woman called it Jurassic Park. We started making calls and one day later (today) she said 21 @CityofDetroit workers “descended on her block like bees” to start work... more to be done, but she’s happy with the start! pic.twitter.com/HUmcjXNfih

She wanted something done, but there’s no neighbor to fix the problem — the homeowners abandoned the home years ago. It’s one of roughly 96,000 now owned by the city of Detroit’s land bank.

The city has thousands of homes that they do upkeep on, mowing lawns and keeping front yards looking nice to increase the value of neighborhoods.

The problem with this particular home on the 2200 block of Lothrop is that the overgrown mess was in the backyard. According to the woman who lives next door, she couldn’t get anyone to come to clean it up — she wasn’t even sure if she had the legal right to do it - or pay someone else to clean it up.

“Nobody else is going through this except me,” she said wiping tears away, when asked if neighbors had rallied behind the move to get the house cleaned up. “Of course it’s not affecting anyone like it affects me, because they don’t have to live next to it. They don’t have to go in the backyard and be afraid in the morning.”

The woman had a stroke a few years ago, and her grandson was killed in a shooting.

Left alone the mess is quickly becoming too much to handle. Mice scattered from the backyard of the dilapidated home when she gave a tour of the issue.

The yards of all the homes can be seen with ease in an aerial view taken from Drone 7 until you come to the particular home where it appears a jungle springs up.

7 Action News reached out to the city of Detroit and brought the problem to their attention. Within 24 hours they’ve not only stepped up to the plate to answer questions, they’ve promised action.

“In the next few days we plan to take care of that,” said Karla Williamson, the interim district manager for the Department of Neighborhoods. “This home is part of our pipeline for demolitions, so with that, this home will soon come down.”

The woman noted that a crew moved into the neighborhood and began work to board up the building, a concern because she’s heard people inside the abandoned home.

A second crew was sighted taking pictures of the home. They told the homeowner they were trying to determine what type of equipment they’d need in the coming days to clear out the overgrown trees, bushes, and vines.

According to the city, there is even more relief on the way. The home is inside an expanding area of the city where federal dollars can soon be used to demolish vacant homes.

There is also work being done behind-the-scenes to get crews on the streets removing debris and overgrown plant life that is causing a burden for homeowners living next to city-owned properties that are growing out of control.

Soon a proposal and funding plan will go before the Detroit city council.