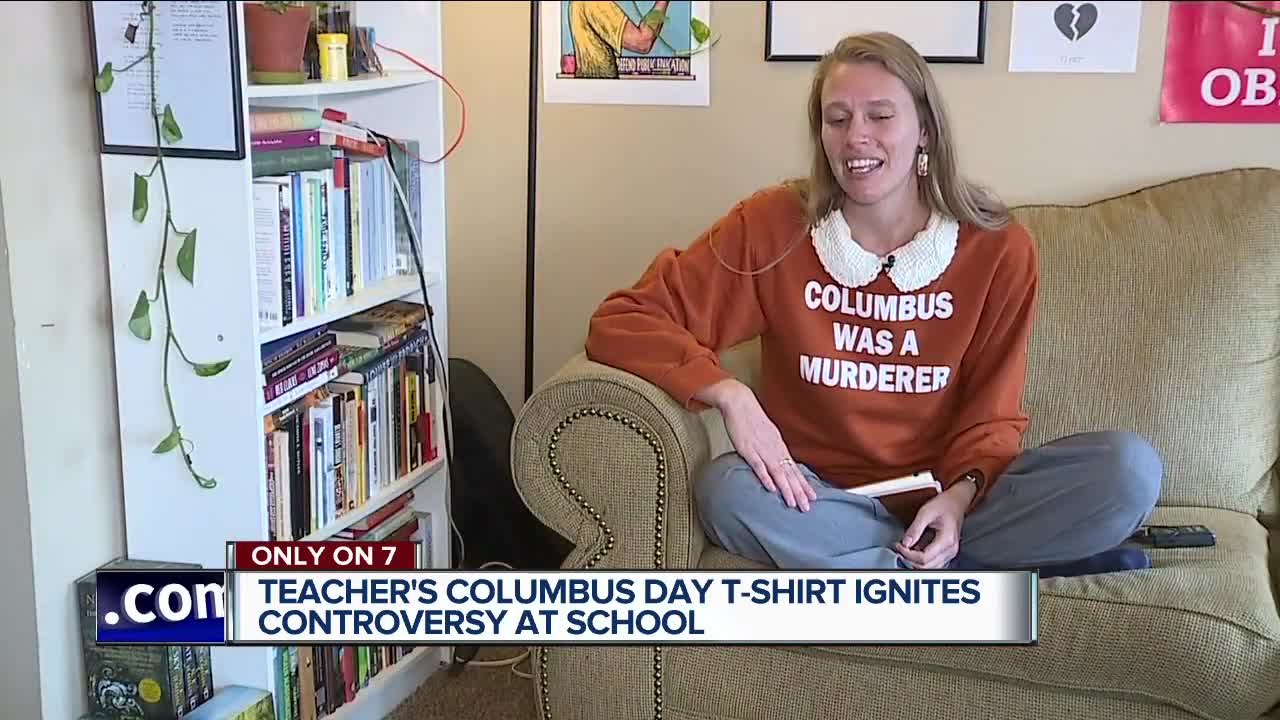 A teacher's shirt that says Columbus was a murdered is sparking controversy in the school district.

DETROIT (WXYZ) — Christopher Columbus changed the world by connecting Europe to the Americas. He also committed brutal acts against indigenous people. So on Columbus Day, one teacher wore a t-shirt that read “Columbus was a murderer.”

“I wanted to wear this shirt to spark discussion,” said Emma Howland-Bolton.

She says she wanted to have a conversation with her fifth-grade students at Clippert Multicultural Magnet Honors Academy in the Detroit Public Schools Community District, about how there are different perspectives. But instead, a school administrator asked her to take off the shirt. She soon feared she would be disciplined.

“I was informed that my shirt was my opinion and I countered with it is a fact,” Howland-Bolton said.

A teacher says she wore this shirt to school and found herself at the center of a controversy. Is this shirt a statement of fact or opinion? #ColumbusDay The story on @wxyzdetroit at 6. pic.twitter.com/L5sAJb1dq7

So is it a fact? 7 Action News sat down with History Professor Pamela Sayre from Henry Ford College. She says it really does depend on whose narrative you are looking at. Christopher Columbus was a man of his time and murder in his country often was only a crime if you killed a man with a soul that could be saved by Christianity.

People of other faiths were dehumanized.

“There was serious debate over time about what beings had souls," Sayre said. "For a while there was a question, did women have souls."

The fact is that the men he oversaw did commit many murders from the perspectives of Indigenous People who lost their lives.

“There is a history of brutalism, of aggression against native people and lesser charges really – stealing crops, raping women,” Sayre said.

The Detroit Public Schools Community District says the shirt was first noticed because sweatshirts in general are not part of a business casual dress code. Then the statement on the sweatshirt was discussed because it was not submitted as any lesson plan to be pre-approved. Ultimately, the teacher faced no discipline.