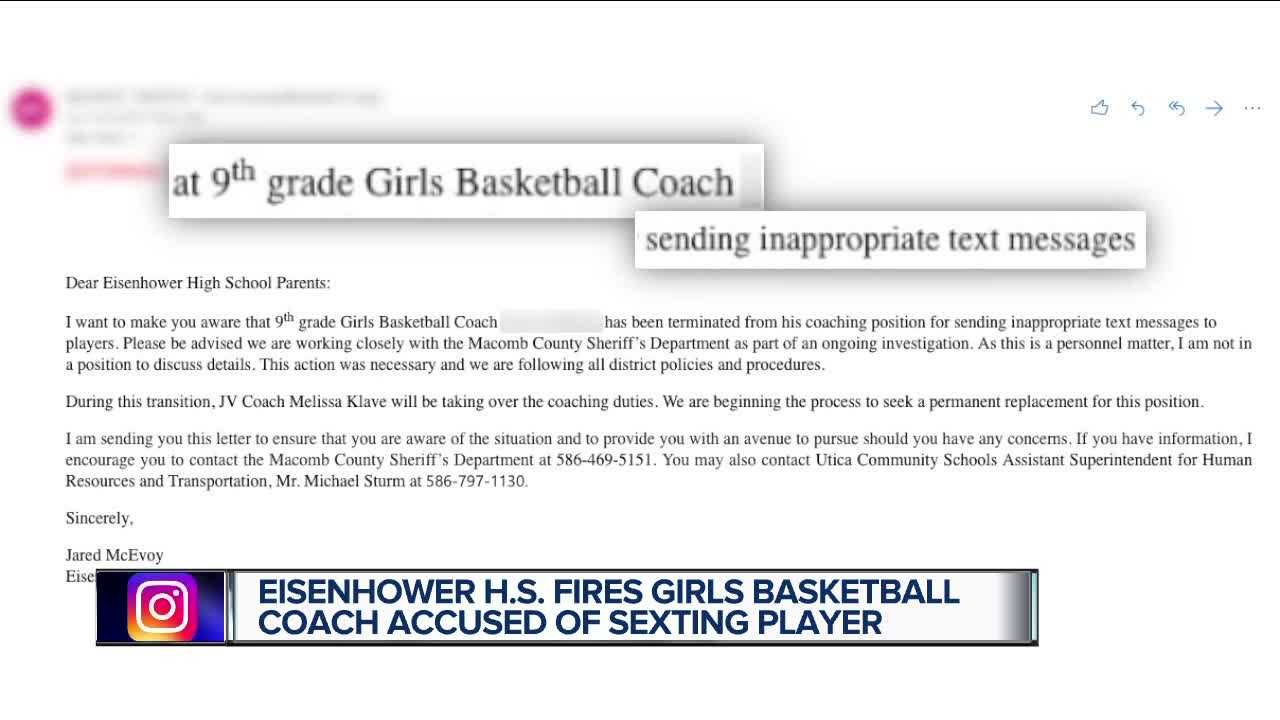 A head freshman basketball coach has been fired from a metro Detroit school after he allegedly sent inappropriate text messages to players.

UTICA, Mich. (WXYZ) — A head freshman basketball coach has been fired from a metro Detroit school after he allegedly sent inappropriate text messages to players.

Utica Schools and law enforcement were made aware of the disturbing allegations against the head coach on the eve of the freshman girls first basketball game.

He was fired this morning, and now the JV coach is leading the team in their game against L’anse Creuse.

“I went to school there 30 years ago. And it’s embarrassing that my kids go there now and I got to worry about them,” says Utica parent Dave Wagner.

This Utica schools alum and parent was reacting to the contents in the letter sent by the Eisenhower High principal outlining a disturbing and familiar allegation, the head coach for the freshmen women’s basketball team fired for allegedly sending inappropriate text messages to players.

Since he’s yet to be charged, 7 Action News is not naming him, but he was hired less than a month ago.

in a news release, the Macomb County Sheriff’s Office says the report came from a parent and the sexually explicit messages were sent to only one student.

“it’s absolutely disgusting so. Get ‘em out of here man. Send them to jail for life,” says parent Dave Dobradenka.

“Everybody was talking about it. you know, just like everybody was snap chatting each other,” says Junior Austin Teichman. “Just because we had an incident with a band teacher, something similar to this so everybody was just like oh this is all over again. You know there’s a problem obviously that they’re hiring some people that aren’t qualified.”

The incident he’s referring to was back in late October when the band director resigned as allegations surfaced of lewd emails sent to a student.

We’re told the coach in question was not a teacher and investigators say he is cooperating so far.