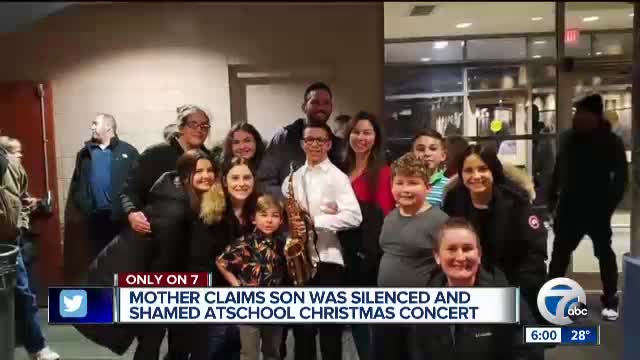 A Macomb County mom is furious. She says her special needs son was silenced and shamed by adults at a school Christmas concert in Clinton Township.

She says her special needs son was silenced and shamed by adults at a school Christmas concert in Clinton Township.

Her anger and disappointment has been echoed by many on social media.

The L’Anse Creuse Middle School concert was earlier this week and 14-year-old Dominic Schroeder was super excited. He plays the saxophone and has been practicing the performance in band class and at home too.

Dominic is cognitively impaired. Because of his special needs, he often practices with a plastic digital saxophone with ear-buds. The device can help the instructors measure his progression.

On concert day Dominic was ready to perform using his own shiny saxophone. But according to his family, Dominic was told by an administrator that he could not play his instrument with the band. He was instructed to use the plastic saxophone - with earphones.

Dominic was upset and his loved ones were too. We’re told he and his family did not agree to this. They also say, with this device, Dominic’s the only one who can ear his music. It is silent to the rest of the world.

The family believes this is discrimination and exclusion. And they want answers.

L’Anse Creuse Public Schools is proud to provide a variety of academic and extra-curricular options for our students and families. These programs allow our students to grow and express themselves both in and outside of the classroom. We continue to be committed to supporting all students in their participation in our programs and work individually with families to make that happen.