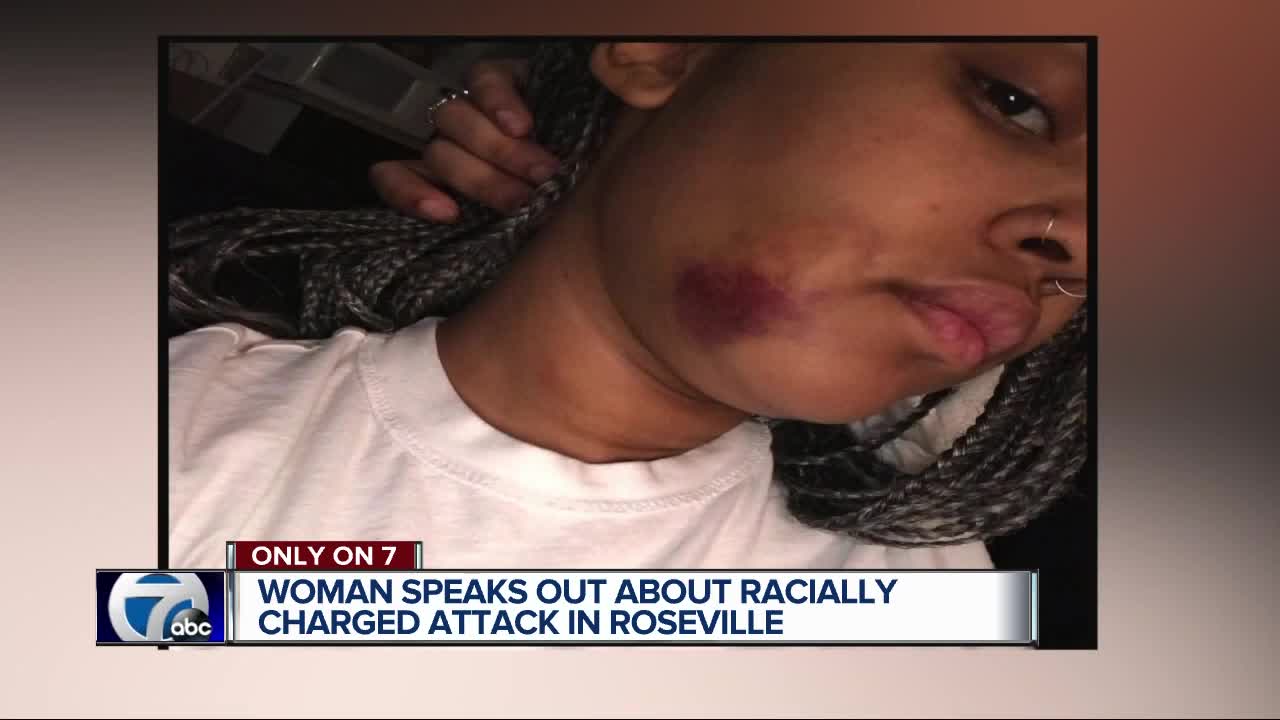 A Roseville woman was attacked in a restaurant parking lot. It was early Saturday morning and it was brutal. The 20-year-old victim believes the motivation behind the hate, the brutally, the violence is the color of her skin. Rochelle Page, was picking up, a to-go order from the National Coney Island at 12 Mile and Groesbeck in Roseville.

A Roseville woman believes she was attacked in a restaurant parking lot all because of the color of her skin.

Rochelle Page, 20, was picking up a to-go order from the National Coney Island at 12 Mile and Groesbeck early Saturday morning.

Rochelle tells 7 Action News when she came out and got into her friend's car, her friend cautioned Page to be careful.

“I told her, I was like 'stop, hold on, it’s (sic) some people behind you.' She never hit them or anything she stopped,” she says.

But suddenly, when everything seemed to be all good, things went terribly wrong.

“The dude, he like kicked her car or whatever and just got to yelling racial slurs out to us”, she continues.

Rochelle says he was calling them the N-Word.

She went on to explain that the stranger, who happens to be white, would not stop shouting that vile, vicious word. When she got out of the car and asked the man what he was saying, it went from bad to worse.

“He swung on me and hit me, after that I blacked out and woke up in the ambulance,” she tells us.

The one punch clearly packed some power. Rochelle’s friends say she went directly to the ground, hitting her head on the concrete.

Rochelle suffered a concussion, cuts and a massive bruise or her face.

Roseville police are investigating this assault and looking for the man who went swinging.

Rochelle’s mother, Rosie Robinson is upset and hurt beyond belief.

“For her to be my child I felt it deeply. When your child melts and cries in your arms...I didn’t raise my children to have hatred toward anybody. His fate is not in my hands. I am very prayerful and I have a lot of faith that justice will be served. I need whoever did this, whoever saw this, the girls that were there to step forward and say something. This man can’t go around hurting black women, women period and get away with it,” says Rosie.

She is personally offering a $1,000 reward for information that leads to an arrest in her daughter’s case.