Black woman says she was asked to give up her seat to white men at J. Alexander's 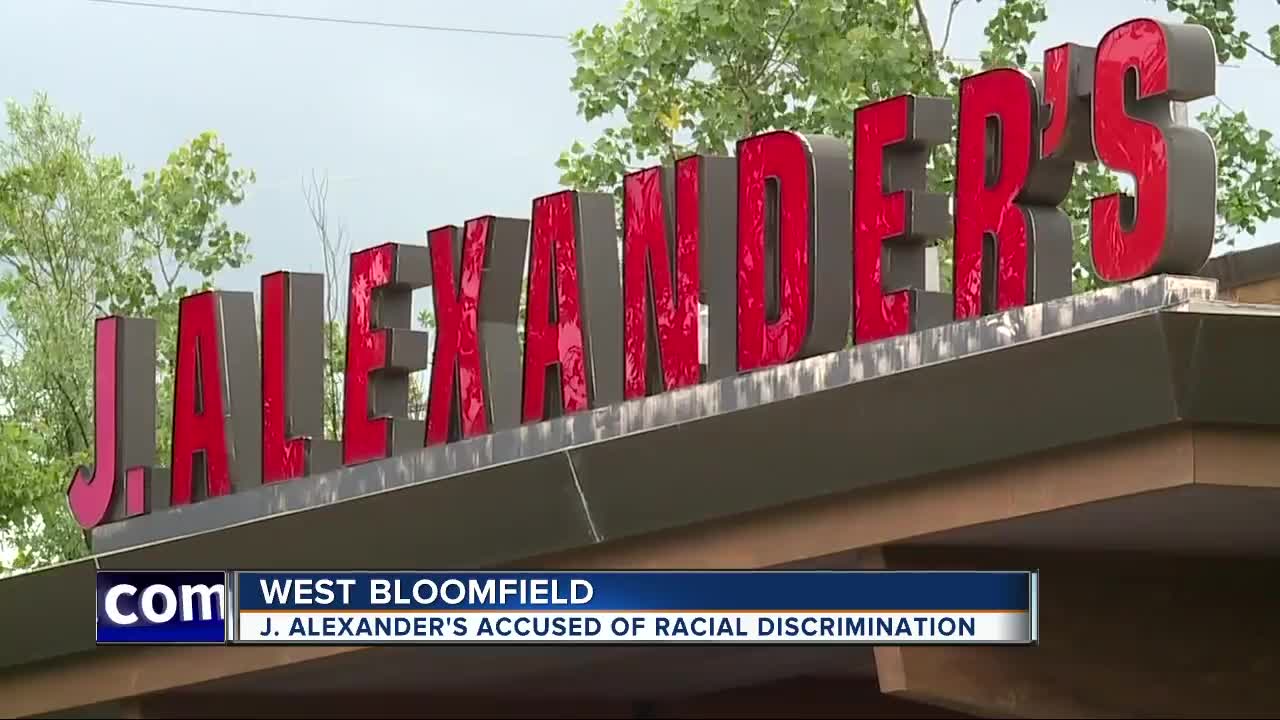 An African American woman says she was discriminated against at J. Alexander’s restaurant in West Bloomfield when she was asked to give up her seat to a white man and refused service. She is calling for the termination of all employees involved. WEST BLOOMFIELD, Mich. (WXYZ) — An African American woman says she was discriminated against at J. Alexander’s restaurant in West Bloomfield when she was asked to give up her seat to a white man and refused service. She is calling for the termination of all employees involved.

Lia Gant, her attorney Maurice Davis, and Jerrick Jackson, another patron at the restaurant last Thursday who says he was called the N-word, held a press conference Monday.

Thursday’s incident began when a white bartender asked Lia Gant and her friend to give up their seats at the bar for two white men, according to Gant.

When Gant refused, the bartender took her drink and poured it down the sink.

“I immediately got up and went to management and she said I shouldn’t be upset because the drink wasn’t thrown on me,” said Gant.

Gant said she paid the bill after the manager refused to remove it.

"I was racially profiled. I was told to move out of my seat for two other white men to be seated," she said.

Meanwhile, Jackson said he was also discriminated against on the same day, when a white patron called him the N-word and told him to leave after he complained to management about poor service.

Video was recorded as the white customer yelled at Jackson, hurled food, and nearly struck Gant’s friend in the face.

When West Bloomfield police arrived, Jackson says the restaurant employees concealed the identity of the patron who threw food at them.

“We will fight to ensure that J. Alexander’s is held accountable for denying our client’s rights to a public accommodation in violation of her fundamental civil rights,” said Davis in a release.

Jackson said that that he and Gant did not know each other and that both incidents happened on the same evening.

“That’s not coincidental. This restaurant has a culture of racism,” he said.

Since opening our doors in West Bloomfield more than 21 years ago, J. Alexander’s Restaurant has offered the highest quality food and professional service in a safe, respectful and welcoming environment. We have always adhered to a strict non-discrimination policy for all our restaurant staff and guests to ensure the best possible working and dining environment. This includes treating every customer with the same non-discriminatory service. We do not tolerate any diversion from this policy and likewise do not tolerate any inappropriate behavior from either guests or employees.

On June 20, our staff and many of our guests experienced an unfortunate incident that disrupted the otherwise pleasant dining environment in our West Bloomfield restaurant. Our staff made every responsible effort to safely diffuse this incident in the face of profanity and acts of misbehavior directed at them. None of our employees used profanity, made racial remarks or threw food but certain guests did. Ironically, two of those guests involved in this incident have falsely accused our staff of racial discrimination.

The West Bloomfield police were called in during this incident to assist with the unruly behavior of certain guests. Any guest who threw food or was otherwise disruptive was asked to leave. Working with police, our staff made certain that every guest left the restaurant through the front door of the restaurant. We have turned the security surveillance video over to the West Bloomfield police. We will remain in close contact with the police department as we await a report on their investigation and their determination as to whether any formal charges related to this behavior are warranted.

We are grateful to have been a part of West Bloomfield for more than two decades, and we look forward to continuing to serve our guests with a pleasant dining experience.