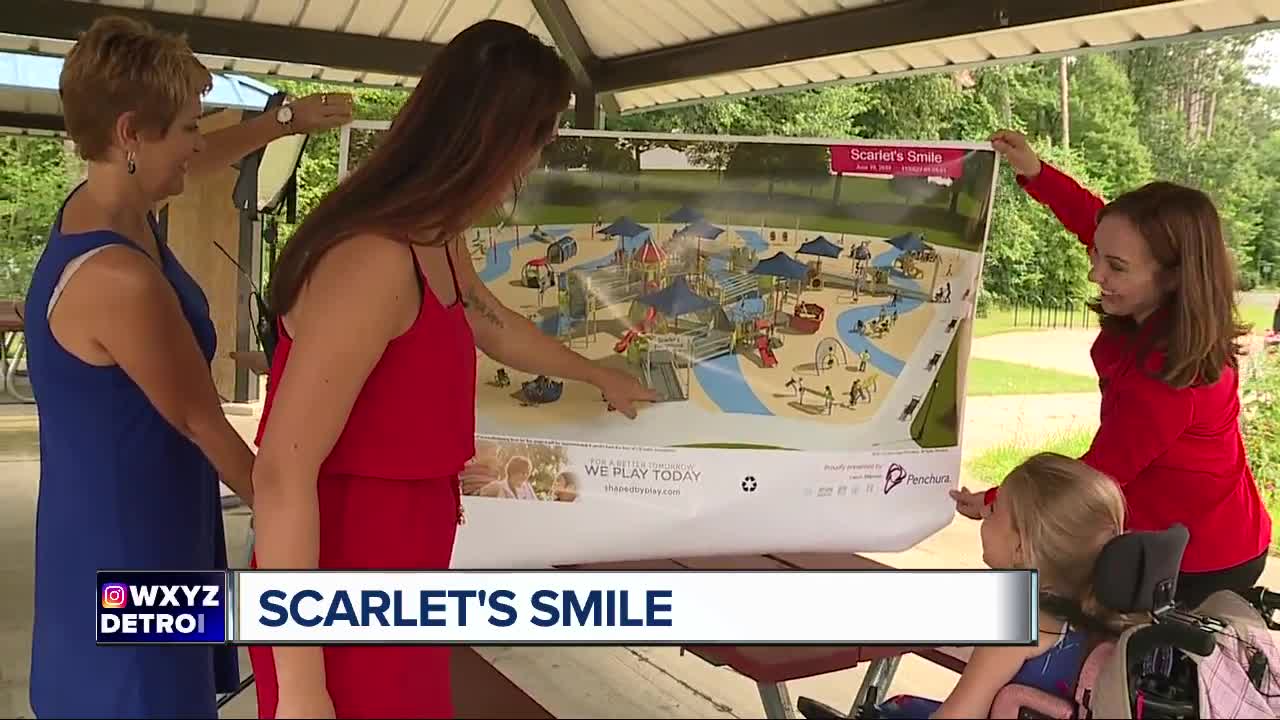 After a massive fundraising effort, the Scarlet's Smile inclusive playground is being built in Commerce Township.

COMMERCE TOWNSHIP, Mich. (WXYZ) — When former WXYZ anchor Stephen Clark took his granddaughter to playgrounds with equipment for children with disabilities he noticed a problem. The playgrounds separated children with special needs from other children. Parts of the playground were accessible, but most not.

His granddaughter Scarlet, who is in a wheelchair told her family how it made her feel.

“Sad. Because I couldn’t play with them,” she said of other children at the playground.

Now the dream of her family, to create a playground where all children can play, is becoming a reality. Construction is underway.

Let’s take a look back at how we got to this point. Stephen Clark told his story on WXYZ back in 2015. His daughter Hillary noticed that after her baby rolled over once, she never did again. She asked doctors why she wasn’t getting stronger.

“By ten months the diagnosis was SMA Type Two. As of now there are no treatments. There is no cure. There is nothing we can do, but palliative care,” she said in a story Stephen Clark told on WXYZ in 2015.

Doctors did not think Scarlet would survive long. Her family held a fundraiser for Scarlet’s care and decided to raise more to build a playground for all children thought the non-profit Scarlet’s Smile.

“It was more of a legacy. This is what she will leave behind,” said Hillary.

Then Scarlet’s family heard about a new drug called Spinraza. They struggled to get access to it due to bureaucratic red tape, but once they did - it was miraculous.

After several treatments and therapy Scarlet for the first time had the strength to support herself as she sat in a shopping cart and could move her legs.

Scarlet now can get around on her own in her wheelchair. Thanks to the drug she now can move more than many thought possible. The 18,000 square foot barrier-free playground will not be a memorial, but a place where Scarlet can play.

“She could really enjoy this thing for a lot of years and it is really cool,” said Hillary.

It is possible because of children who donated their allowances at school fundraisers, and companies that donated thousands, even hundreds of thousands of dollars.

“What people do for each other, it makes you have a big heart,” said Al Swisher, whose company did the excavating.

“It is a really good for kids. I would like to see the kids on the playground,” said Kevin Kinney of Ideal Contracting, which donated six figures worth of labor.

“I made a promise to Scarlet a few years ago,” said Stephen Clark. “I said I will walk for her if she will fly with me. And this is the community walking for her.”

To learn more about the project go to ScarletsSmile.org.