Walgreens to shutter 200 stores in US 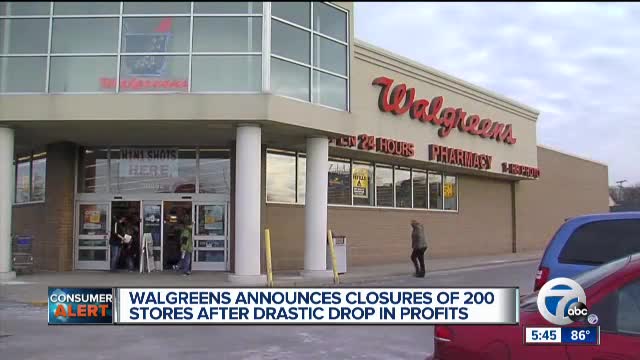 FARMINGTON HILLS, Mich. (WXYZ) — "It’s just so convenient. You can’t beat that. Amazon takes two days to get there. You need a lot of stuff now," said Matt Shagena, who likes to frequent the Walgreens on 14 mile and Middlebelt, in Farmington Hills to get all his last-minute needs.

Whether deodorant, shampoo, or sunscreen, Shagena says this Walgreens is his go-to quick stop. It's close and convenient, but that convenience could be on the chopping block, with the company announcing it will shutter 200 hundred stores after reporting a weak profit outlook for 2019

The online competition for brick and mortar chains is real and stronger than ever. But Amazon isn't single-handedly creating the tough headwinds.

"People will combine shopping trips at say Target or Kroger...and their prescriptions will get filled there. It’s not just online. It’s the advent of all these other channels of competition," said Stoltman.

The company says that in areas where a store closes, customers will simply be pushed to use the next closest location but promise the closures will have minimal disruption to customers.

"My whole family we get our medicine from here... If it closes down it would be a hassle in the local community," said shopper, Sadeem Boji