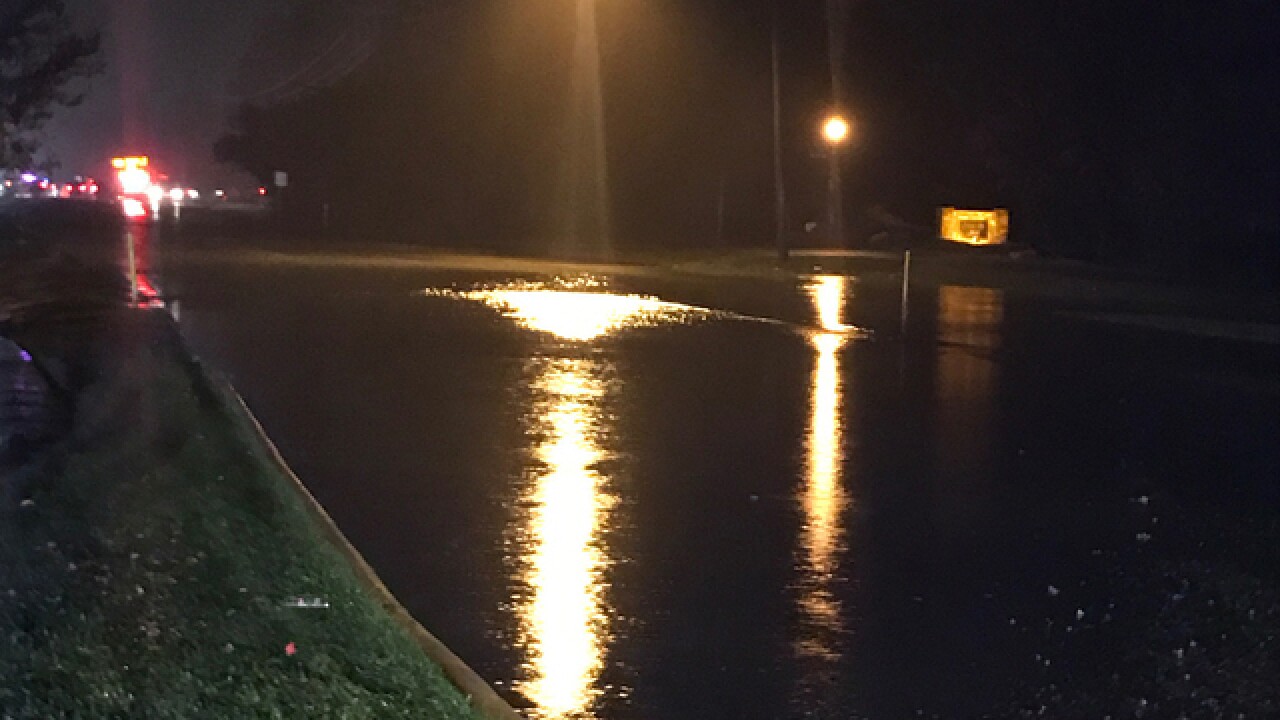 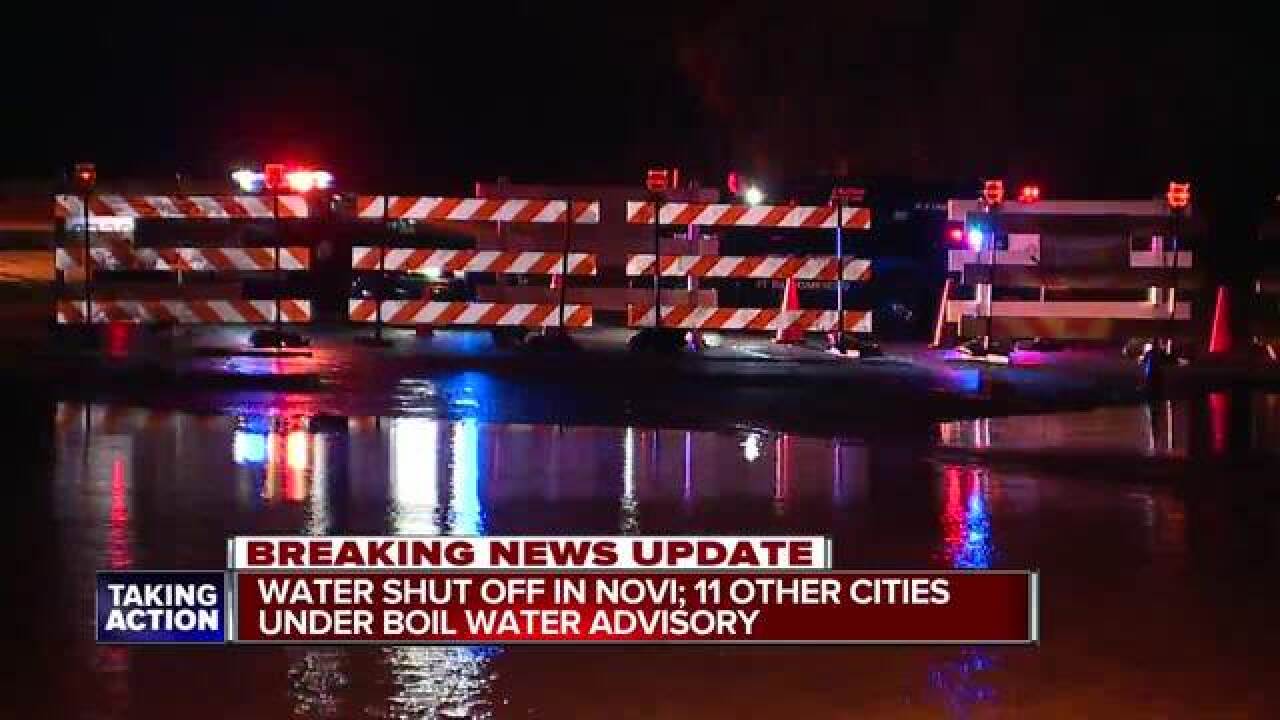 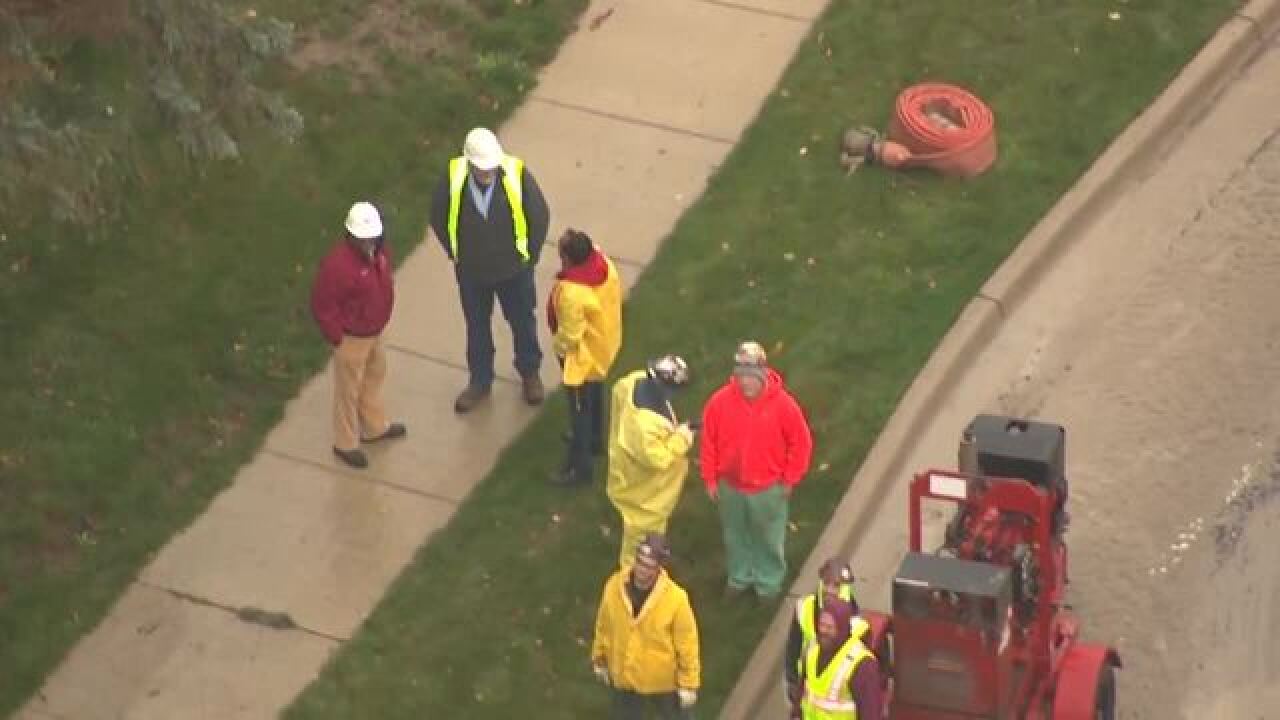 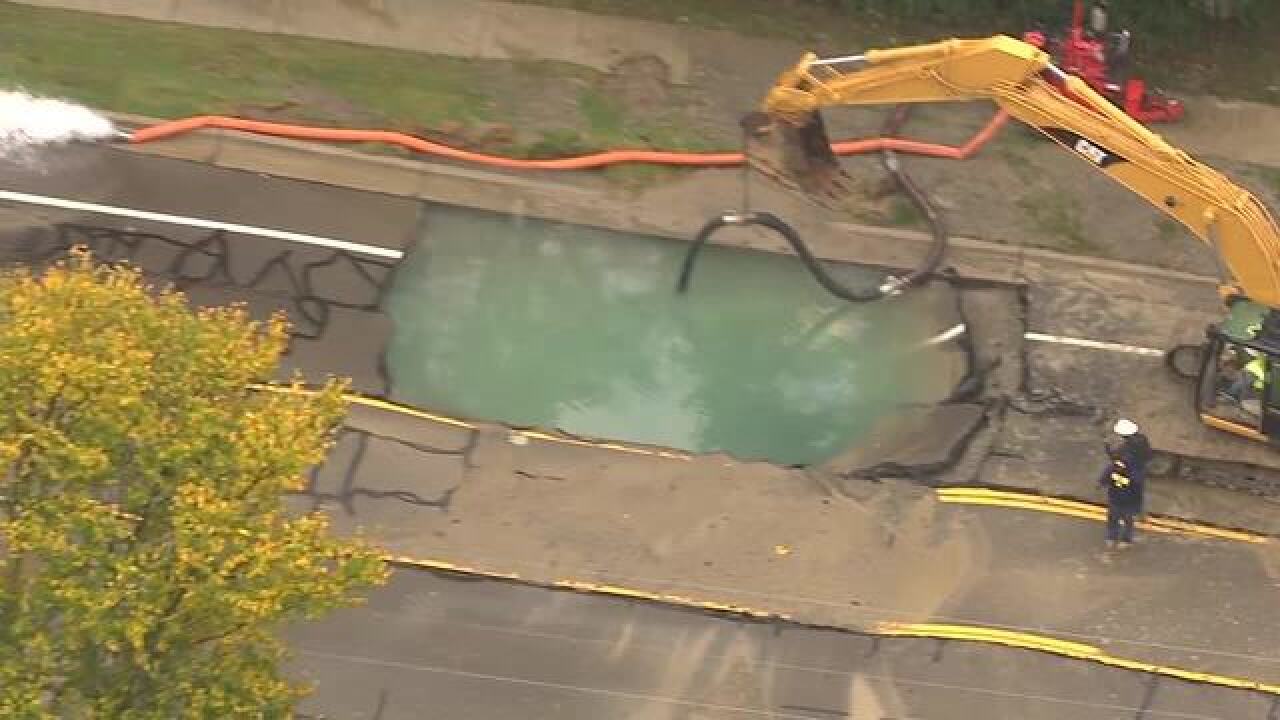 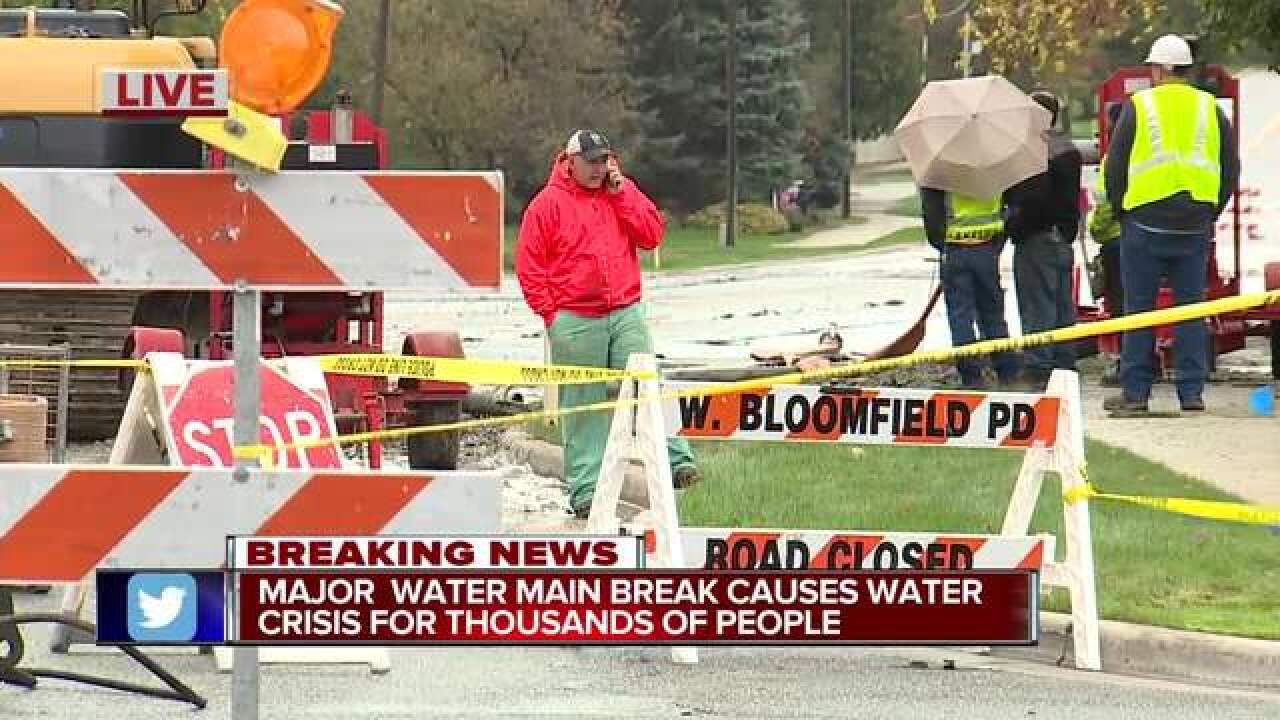 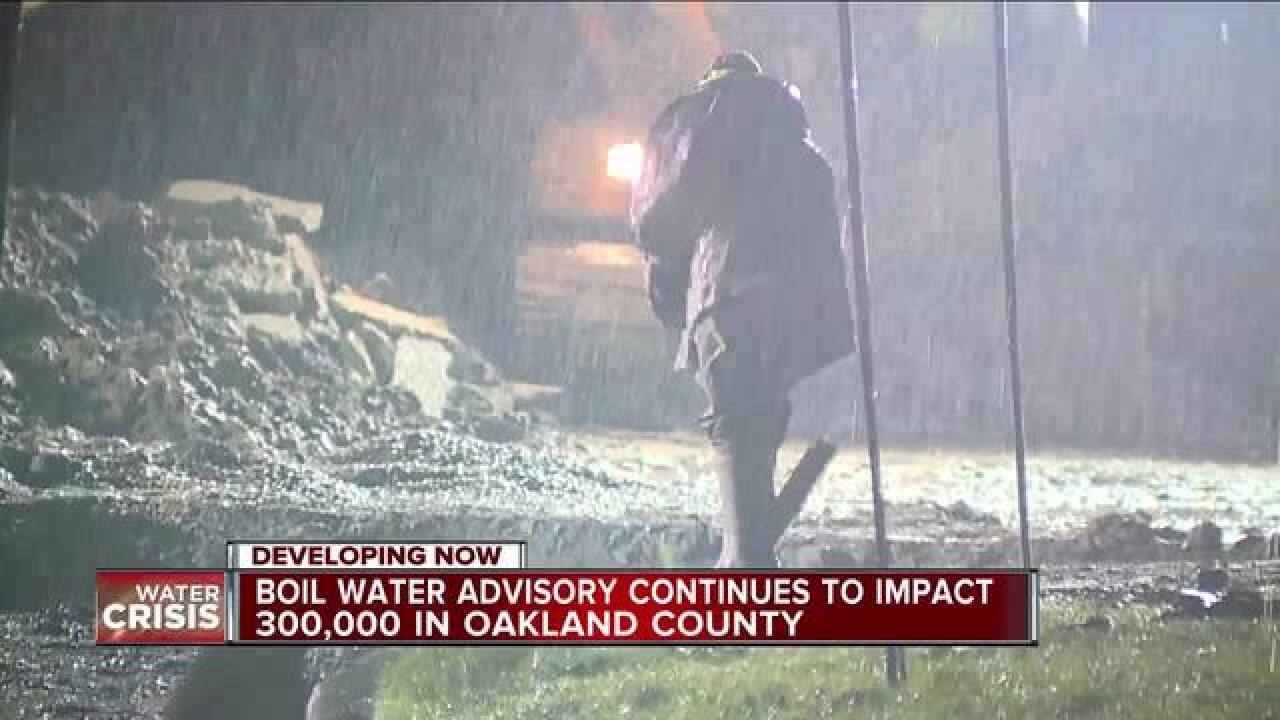 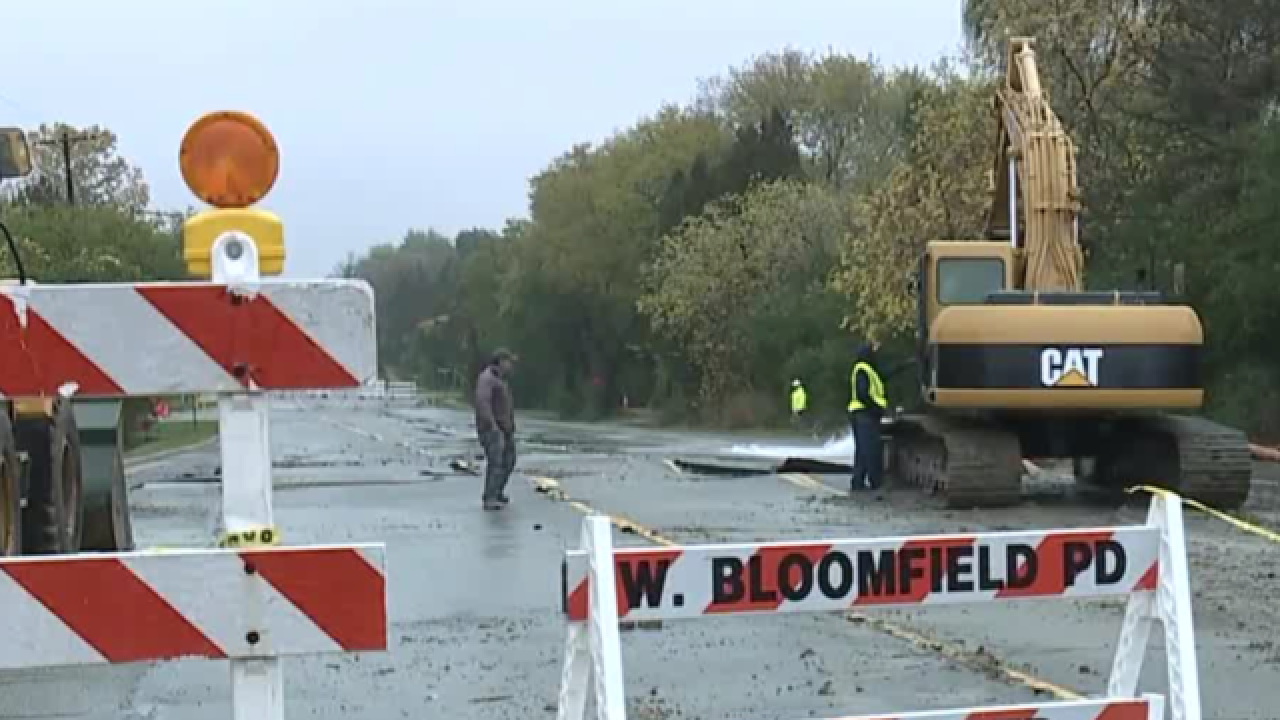 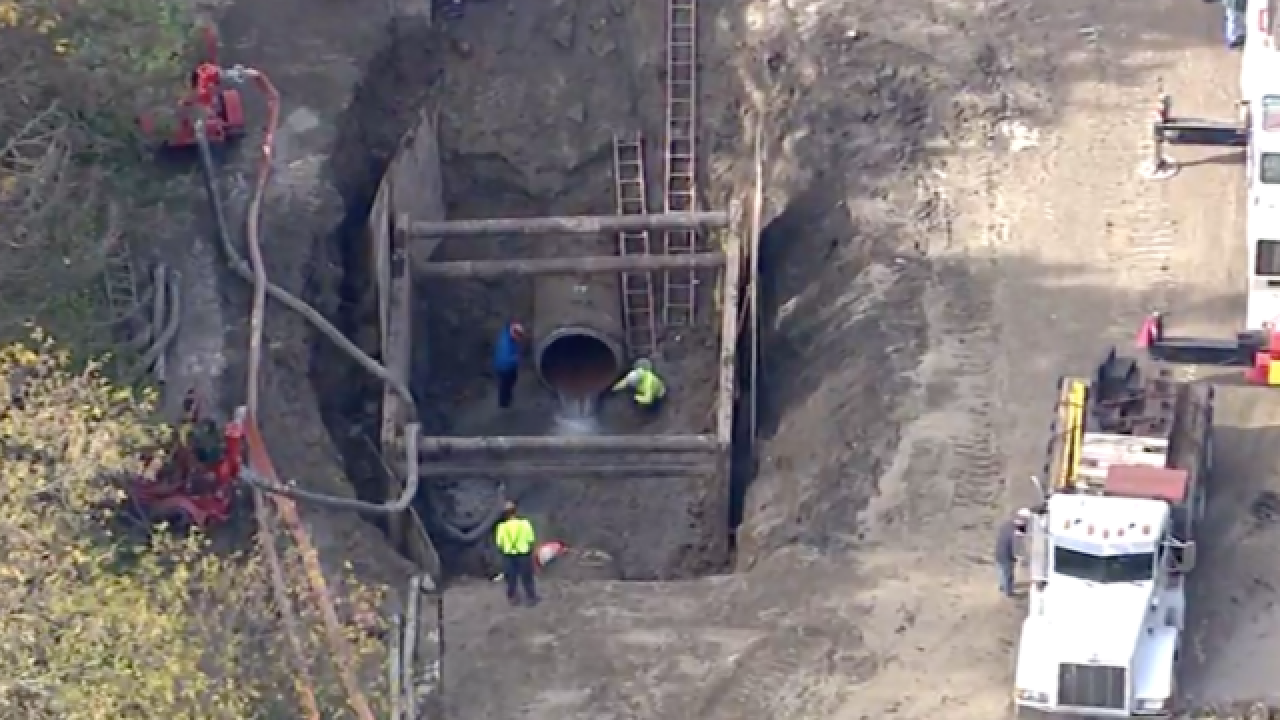 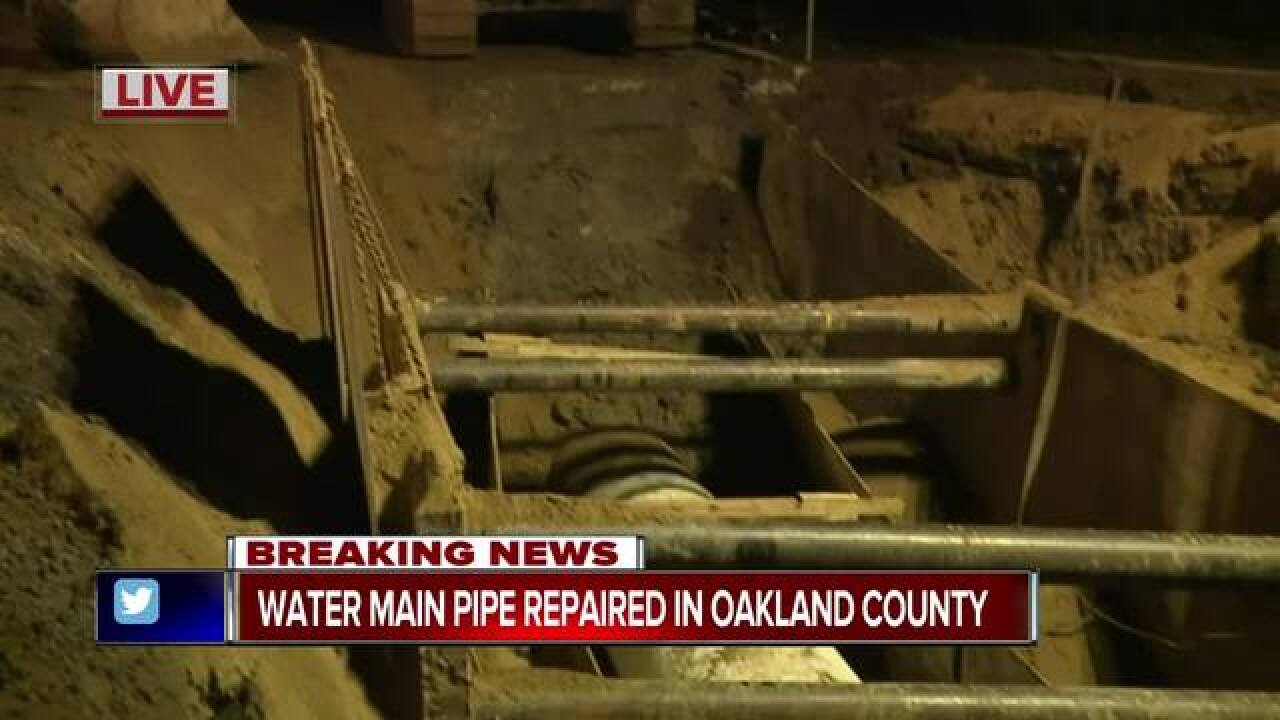 All services at Henry Ford facilities that were impacted by the water main break will be fully operational Monday.

Northwest Farmington Hills will most likely have its advisory lifted Monday morning.

Testing has confirmed that the water is safe to consume and cook with, and meets all Safe Drinking Water Act regulations.

The first round of test results taken by the Great Lakes Water Authority have come back clear for the communities that remain under a boil water advisory.

The rest of Farmington Hills that is unaffected by last night's pressure malfunction will end its boil water advisory before the weekend is over.

GLWA expects that a second round of test results will be returned on Sunday for the remaining communities that have cleared their first round of water quality testing. Upon a second clear result, GLWA will lift the boil water advisory.

A portion of Farmington Hills will not have the boil water advisory lifted until at least Monday morning.

A malfunction in a pressure regulating valve at Halsted and 14 Mile caused the pushback.

To see a map of the affected areas, click here.

The boil water advisory has been lifted for Rochester Hills and Oakland Township.

A leak was discovered last evening during pressure testing, GLWA says. It has been repaired and pressures are expected to be restored throughout the impacted area today.

GLWA says the timeline for lifting the boil water advisory has shifted, depending on pressure and water quality testing.

According to the Great Lakes Water Authority, water quality testing starts today and will go into the weekend.

The replacement pipe has been installed at the site of the broken water main in Oakland County. Testing is underway. The boil water advisory remains active.

The 52-1 District Court in Novi will remain closed to the public Thursday and Friday.

"Out of abundance of caution, the court will remain closed until the boil water alert is over," said 52nd District Court Chief Judge Julie Nicholson. "Our plan is to resume normal operations on Monday.

According to a statement released by the City of Farmington Hills, the pipe needed to fix the water main break is currently being installed and repairs will be completed as soon as possible.

After the installation, tests will be conducted on water pressure and water samples will be tested for bacteria. Following 48 hours of consecutive samples that test negative for any contamination, the water will be cleared for consumption.

Bottled water is being distributed by the city to those with proof of Farmington Hills residency until 8 p.m. at the Costick Center on 11 Mile Road.

Fourteen Mile Road between Farmington and Drake Roads will be closed while the water main and pavement repairs take place.

Chopper video from over the scene of the water main break in Oakland County.

Out with the old, in with the new: work continues at the site of the water main break.

Here's a look at what the broken main looked like yesterday & and the new replacement pipe that is being installed today. pic.twitter.com/Bla2kRsS0D

The replacement pipe has arrived at the site of the West Bloomfield water main break near 14 Mile and Farmington. Repairs are expected to begin immediately.

The City of Novi is telling residents to still boil their water even if normal pressure resumes. The City tweeted that it hoped the community would have drinkable water by the weekend.

Residents are also being asked to conserve water as it is flowing through a 10-inch main while repairs are being made, according to the City of Novi.

Officials say 51,000 people are currently without water in Oakland County because of a massive water main break.

They also say more than a quarter of a million people are affected by the boil water advisory, which will remain in effect for at least 48 hours after a new pipe is put in to fix the broken section. That will allow officials to run tests.

Officials also so the 48-inch transmission line that was damaged was installed in 1970. At 47 years old, that puts it in the middle of its service life.

Bloomfield Township, Commerce Township, Farmington Hills, Keego Harbor, Novi (the area bounded by 14 Mile on the north, 8 mile on the south, Napier on the west and Haggerty on the east), Novi Township, Oakland Township (specifically the subdivisions: The Hills of Oakland and Kings Pointe), Orchard Lake Village, Rochester Hills (north of Hamlin and west of Livernois), Walled Lake, West Bloomfield Township and Wixom.

Oakland University police say a portion of the campus is affected by the Boil Water Advisory.

The following areas include:

Here's @vmcardenas9 with an update on the Water Outage here in Novi. pic.twitter.com/gwwZrvIzhI

Services at Beaumont Medical Center in West Bloomfield are shut down due to the water main break. Surgeries had to be moved to Beaumont Hospital in Royal Oak.

Beaumont Health notes that some physician offices in the building might stay open, but people are advised to call ahead.

Elderly residents and people in need can get water at the Novi Civic Center at 45175 10 Mile.

The Great Lakes Water Authority said a 48-inch diameter water main failed on Monday night. GLWA personnel are on site to isolate the damaged portion of the main and work to drain the water from the roadway.

At the earliest, the GLWA says they have have a replacement pipe installed by Wednesday night, but they still have to complete two rounds of testing after the replacement.

That means the earliest they plan to lift the boil water advisory is late Friday night on Oct. 27.

West Bloomfield police say it could take four to five days to repair a massive water main break in Farmington Hills that has 11 Oakland County communities on a boil water advisory.

"Due to the substantial extent of the current water main failure, repairing this problem and placing public water back into service and removing a Boil Water Advisory, it's estimated to take at least 4-5 days in duration in order to make necessary repairs and place the entire at-large water system of West Bloomfield into a no boil water status," police said in a Facebook post.

Novi Police Chief David Malloy said the city activated its emergency operations center around 5 a.m. after a massive water main break has the city under a boil water advisory.

Farmington Hills Public Schools is reminding parents that all schools north of I-696 in their district are closed while all of the schools south of I-696 are open.

Henry Ford Hospital in West Bloomfield has no water service and is now closed. The hospital says it is canceling all elective surgeries and procedures, and all of the clinics are closed.

The patients are being transferred to other health care facilities, and ambulances are being diverted to other emergency departments.

For parts of Novi, the water is shut off due to a water main break.

Novi residents who still have water are advised to boil it until further notice.

St. John Providence Park Hospital in Novi has no water. Some patients, we're told, are being sent to other facilities. Elective procedures will be rescheduled, according to hospital spokespeople.

4:35 a.m.
The Water Authority has shut off city water in Novi because of the water main break. Repairs could take up to five days.

Officials have updated the Boil Water Advisory to include all of Farmington Hills north of I-696. Bloomfield Township has also been added to the list, bringing the total number of affected communities to nine.

Bloomfield Hills schools have tweeted that they will be closed tomorrow, because of the water main break.

The Great Lakes Water Authority has issued a mandatory boil water advisory for the following communities: Bloomfield Township, Commerce Township, Farmington Hills, Novi (the area bounded by 14 Mile on the north, 8 mile on the south, Napier on the west and Haggerty on the east), Oakland Township (specifically the subdivisions: The Hills of Oakland and Kings Pointe), Rochester Hills (north of Hamlin and west of Livernois), Walled Lake, West Bloomfield Township and Wixom.

The advisory reads as follows:

RESIDENTS SHOULD NOT DRINK THE WATER WITHOUT BOILING IT FIRST. Residents must bring all water to a boil for at least one minute and then let it cool before using. Boiled, bottled or disinfected water should be used for drinking, making ice, washing dishes, brushing teeth, and preparing food until further notice.

GLWA is taking this precautionary measure due to a transmission main break that occurred at approximately 5:45 p.m. today on 14 Mile Road between Farmington and Drake, causing a loss of water pressure in the water distribution system (pressure below 20 psi).

Whenever a water system loses pressure for any significant length of time, precautionary measures are recommended since a loss of pressure can lead to bacterial contamination in the water system. Bacteria are generally not harmful and are common throughout our environment. Boiling water before using it will kill bacteria and other organisms that may be in the water.

GLWA is currently investigating the cause of the break. The Boil Water Advisory will remain in effect until results from sampling verify the water is safe to drink. GLWA Water Quality will advise the affected communities when the BOIL WATER ADVISORY has been lifted.

General guidelines on ways to lessen the risk of infection by microbes are available from the EPA Safe Drinking Water Hotline at 1(800) 426-4791.

7 Action News is receiving reports of low water pressure in Farmington Hills after a water main break on 14 Mile.

It's happening between Drake and Farmington Roads and is also affecting West Bloomfield.

Water is covering the road and police are urging drivers to avoid the area.

There is no timeline as of yet for when repairs will be completed.

Police in West Bloomfield are recommending people with low pressure or discolored water boil it before using it. The City of Novi has also issued a boil water alert.