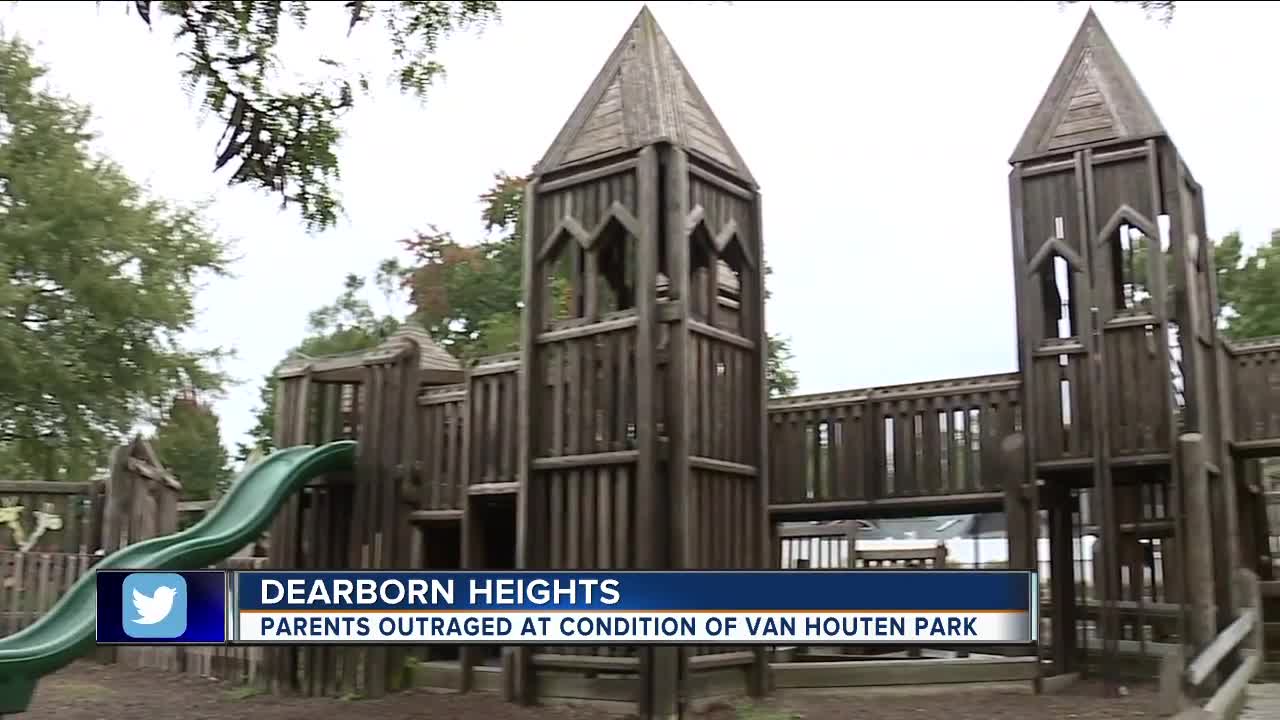 VanHouten Park is the only all-wooden playscape in Dearborn Heights, and it's been a beloved municipal park or decades.

DEARBORN, Mich. (WXYZ) — VanHouten Park is the only all-wooden playscape in Dearborn Heights, and it's been a beloved municipal park or decades.

But lately, some parents say it's condition has become not only an eye sore, but a potential safety hazard for their kids.

Several people have taken to social media to share concerns, noting exposed nails, boarded up slides, and trash piling up there.

Brooke Griffith remembers playing at VanHouten Park as a kid; it was built by all volunteers. But Friday, at the park with her godson, it was a different scene.

"There was a lot of garbage, trash, cups from food restaurants and overgrown weeds," she told Action News.

The slide her godson was playing on even made her nervous.

A beloved park in #DearbornHeights has become a safety concern for some parents, who says rusty chains and exposed nails are putting kids at risk. Why it’s gotten to this point and what the city is doing to make improvements @wxyzdetroit @DearbornHts pic.twitter.com/QocOlTBq1s

“There’s a bolt missing to hold it up. It doesn’t look very stable anyways.”

Dearborn Heights city council member Lisa Hicks-Clayton agrees the park’s condition is a problem, noting that even the ground cover is an issue.

“There are standards and guidelines for what that should look like, and when I look at this, this does not meet that," she told Action News.

Hicks-Clayton says it comes down to money, something Parks & Recreation often gets considered last for.

“I’m talking ground up, everything, I would say close to six figures very easily," she said, referencing fixing the park up.

She’s hoping grants could be the answer, but the city has to agree upon a new Parks & Recreation Master Plan first; the old one expired in 2018.

Griffith doesn't want to see the park torn down, and hopes the city can raise the money to revitalize it.

"To be able to restore something like this would be really cool for our kids to come," she said.

Despite the concerns, for now the park is still open.

Council member Hicks-Clayton said this will be addressed at the next city council meeting. The goal is have the Parks & Recreation Master Plan finalized within the next six months.