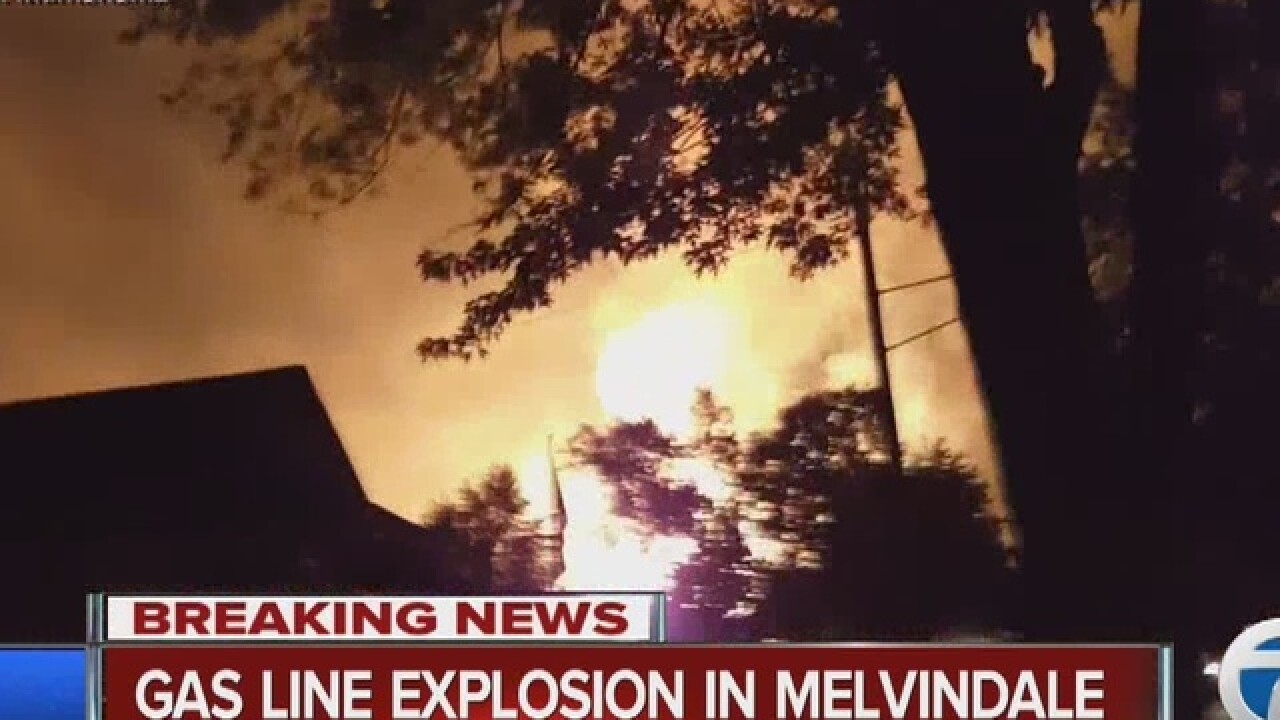 Residents of Melvindale woke up to a large, loud gas explosion just after 3:00 a.m. Saturday. Police and fire crews began evacuating residents north of Elizabeth. One person has been hospitalized.

At 9:00 a.m., officials said all residents evacuated because of the explosion can now return to their homes. The evacuation has been lifted, said Chris Egan of the community emergency response team.

The explosion occurred at a DTE Energy natural gas substation near Allen and Greenfield. A car struck a 500-pound gas main valve with an electrical power line nearby.  A second fire was then sparked at an adjacent training facility.

Gas crews arrived 10 minutes after the car went through a fence at the DTE substation, spokesman Scott Simons said. Crews then turned off the feed of gas.

The driver of the car was injured and taken to a hospital, DTE's spokesperson said. Police sources say the driver was drunk when the accident happened. The 24-year-old man is currently listed between serious and critical condition, a hospital spokesperson tells us.

Police say the driver could not get out of the car, but his friend who was following behind helped him get out. He did suffer burns while getting out.

Melvindale Police say evacuated residents can take shelter at the high school attached to  Inter-City Baptist Church . The church is located at  4700 Allen Road in Allen Park. The Red Cross is also responding to assist residents.

All clear: All evacuated residents can now safely return to their homes. ( 9:00 a.m. )

Police fire and DTE officials worked to explain the explosion during a press conference. "We don't know why the individual drove where he drove," said Melvindale police chief Chad Hayse.

By about 7:30 a.m., DTE Energy spokesman Scott Simons said, "The situation seems to be under control at this point." He said two DTE Energy employees work at the facility overnight, but were out "on a run" when the explosion happened.

Some residents - in Melvindale and in surrounding communities - described the loud explosion as something that first sounded like a July Fourth fireworks display.

On the City of Melvindale's Facebook page, an early message read, "The gas line at Allen Road and Elizabeth exploded. People in that area are being evacuated. As soon as I have more information I will update you."

The city later added that all residents north of Elizabeth were being evacuated as a precaution.

Early video from the area showed a large cloud over Melvindale.

Witness Kassem Rizk posted an early video of the fire on Twitter. He told 7 Action News he was in a backyard in Dearborn when he heard the explosion, saw the smoke and headed toward the scene.

At about 6:00 a.m., DTE released a statement confirming that the primary fire - the one that was first sparked by the car crash - was extinguished.

DTE Energy was notified of the fire in Melvindale at 3:03 this morning. Here is more information: pic.twitter.com/VqUx5jJCeL

I don't care what anyone says. @AlaaBazzi and I were first to report. #dearborn #fire #melvindale #ford #hamido pic.twitter.com/YSuMjVWFLq

Stay with 7 Action News and WXYZ.com as this story develops.