Remembering Margaret Mattic, a Detroit woman who was killed at the World Trade Center on 9/11 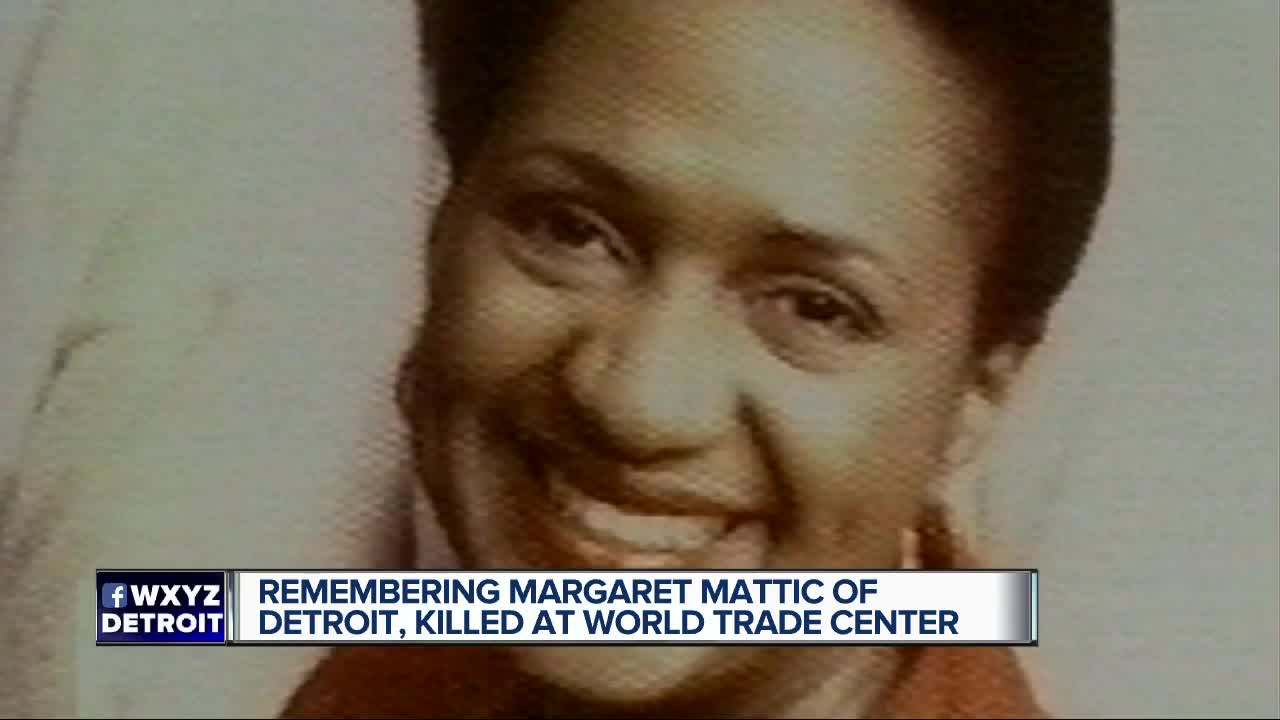 (WXYZ) — Margaret Elaine Mattic. Remember that name. It's one of nearly 3,000 names stencil-cut into the bronze parapets surrounding the twin reflecting pools at the September 11th memorial in New York City.

I went there hoping to find Margaret's name, so I could tell my now wife, Jen, her story and how it affected me. I had no idea how to find it, or where to start.

As soon as we left the cab we walked to a random section of the wall to gaze in awe at the largest man made waterfalls in North America, framed by the names of every person who died in the Attacks on America, and those who died as well in a World Trade Center bomb attack in 1993.

I glanced down at the wall, and the first name I saw: Margaret Elaine Mattic.

I was overwhelmed by an eerie chill, as if the grace of God had led me to that name.

When the twin towers fell in 2001, Diana Lewis and I produced segments on Margaret and her family in Detroit. She left Michigan for New York to pursue her dream of acting. She was working for General Telecom on the 83rd floor of the North Tower when the World Trade Center crumbled.

"I said, 'Oh my, look what is happening,'" her mother, Katie, said. "I said, 'It's happening in New York.' I began to get a little bit puzzled then, because I thought about this is where Margaret is.

I remember sitting down with her lovely mother Katie and sisters each year to remember Margaret and the remarkable soul she was. I was struck by their love for her and their drive to keep her memory alive.

Ten years later Mrs. Mattic passed away and Diana and I remembered her in a special tribute we aired and posted online.

I was deeply touched by Mrs. Mattic's faith and courage in the face of her daughter's horrific death. Margaret Mattic was one of 16 people from Michigan who died when America was Attacked.

Just a few months ago.. a U.S. service member responded to my post about Margaret on Facebook. She was on a mission to visit the memorial and leave a flag on the first name she saw without one. It happened to be Margaret's.

The woman Googled Margaret's name and found my post. She told me she stumbled across the name for a reason. I feel the same.

There's a reason I stumbled upon her name. A reason she reached out to me. So I could tell you to look for her too. To remind you to never forget.

Margaret Elaine Mattic of Detroit. Remember that name. Remember what she died for.

Margaret Elaine Mattic of Detroit. Remember that name. She's one of: 2,977 others who were killed on September 11th, 2001.

Remember how I found it.

I know I will.