Social media reacts to the death of Sen. John McCain 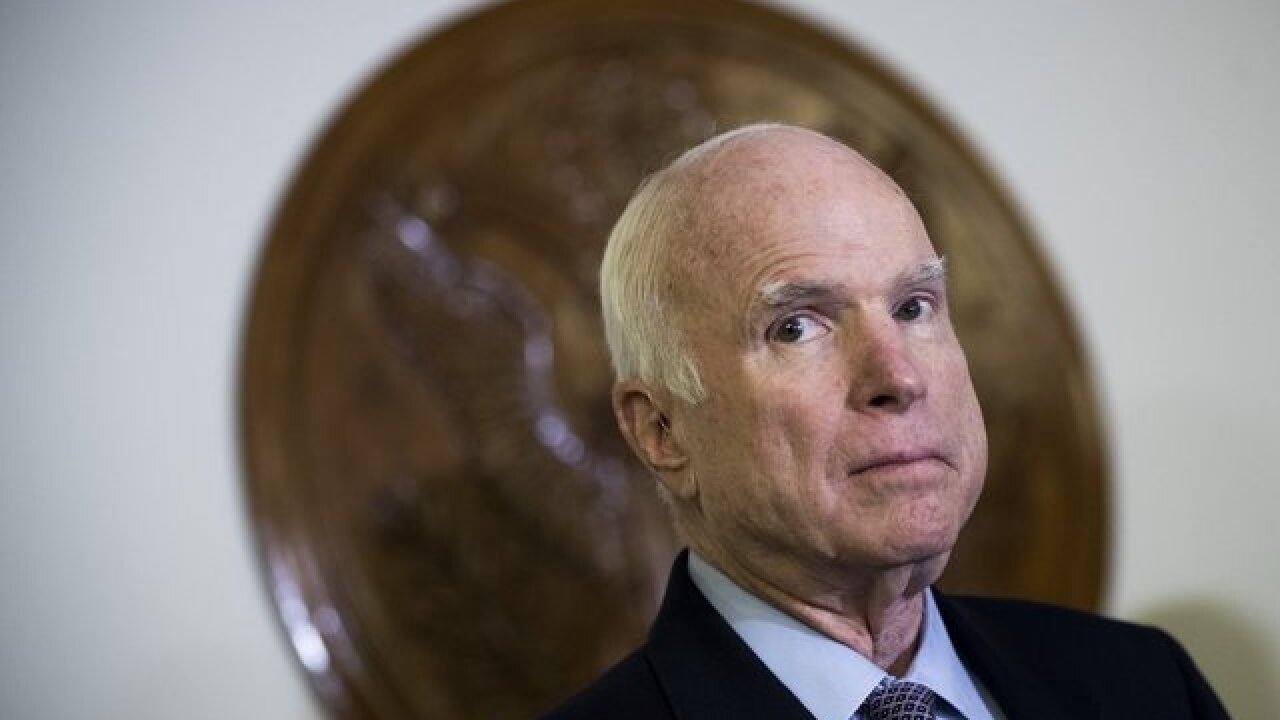 Sen. John McCain, who faced down his captors in a Vietnam prisoner of war camp with jut-jawed defiance and later turned his rebellious streak into a 35-year political career that took him to Congress and the Republican presidential nomination, died Saturday after battling brain cancer for more than a year . He was 81.

The world is reacting to the longtime senators death. See some of the tweets below.

My deepest sympathies and respect go out to the family of Senator John McCain. Our hearts and prayers are with you!

My heart is broken. I am so lucky to have lived the adventure of loving this incredible man for 38 years. He passed the way he lived, on his own terms, surrounded by the people he loved, in the the place he loved best.

America and Freedom have lost one of her greatest champions.

….And I’ve lost one of my dearest friends and mentor.

John McCain was a giant of our time—not just for the things he achieved, but for who he was and what he fought for all his life. He will always be listed among freedom’s most gallant and faithful servants.

Our statement on the passing of Senator John McCain: pic.twitter.com/3GBjNYxoj5

John McCain believed that every citizen has a responsibility to make something of the freedoms given by our Constitution, and from his heroic service in the Navy to his 35 years in Congress, he lived by his creed every day. https://t.co/946T7PnG53

John McCain's finest moment (for me) came in 2008, when a woman at a rally referred to Obama as an Arab. "No, ma'am," McCain replied. "He's a decent family man, a citizen that I just happen to have disagreements with." That's manning up.

The Senate, the United States, and the world are lesser places without John McCain.

Nothing will overcome the loss of Senator McCain, but so that generations remember him I will be introducing a resolution to rename the Russell building after him.

. @SenJohnMcCain was a leader & public servant of deep patriotism, outstanding bravery & undaunted spirit. Throughout his career, we all saw his integrity, humility, courage & grace. May it be a comfort to his family to know that so many around the world mourn with them.

Goodbye to an American hero, one we were lucky enough to call a loyal fan.

Rest in peace, Senator John McCain. Our thoughts are with your family and loved ones. pic.twitter.com/KIMZS1w7Pq

Words cannot express the sorrow I feel at John McCain’s passing. The world has lost a hero and a statesman. Cindy and the McCain family have lost a loving husband and father. I have lost a wonderful friend.

John McCain was an American hero, a man of decency and honor and a friend of mine. He will be missed not just in the U.S. Senate but by all Americans who respect integrity and independence. Jane and I send our deepest condolences to his family.

I was honored to have met John McCain. He always stood up for what he believed was right. Sending love to his family on this very sad day for our country. pic.twitter.com/SiIsXJMqvo

Senator John McCain was a true American hero in so many ways. His selflessness & service to his country will inspire future leaders for generations to come. I’m forever grateful to have served alongside John. Sending love and prayers to his family on this very sad day.

John McCain was an American hero, a dedicated public servant and a true statesman. John’s love for America and our ideals were present in everything he did. His passing is an incredible loss for the U.S. Senate & the entire nation. My thoughts are with Cindy & the McCain family.

John McCain was an outstanding leader and a patriot. An example of heroism and courage and service for every American

Very sad to hear of the passing of Senator John McCain. He was a good man who devoted his entire life to serving the nation, and we are forever grateful for his service.

My statement on the passing of Senator John McCain: pic.twitter.com/61GaHIvX4n

Senator McCain was not only a great man and patriot but also a loyal D-backs fan. I’m proud to have called him a dear friend. On behalf of my entire family, our thoughts and prayers are with Cindy and the McCain family. pic.twitter.com/noSItd72o8

With the passing of John McCain, we have lost a bastion of integrity and statesmanship. In a time of hatefulness and deceit, he renewed our sense of honor and decency.

An honor and a pleasure to know Senator McCain. My condolences to the McCain family and to my dear friend @MeghanMcCain . I am in prayer for you. pic.twitter.com/YGhkK09V89

Fare thee well John McCain. He served our country with honor and distinction. He went from being a rival in 2000 to a trusted friend of President Bush. Honor and dignity always matter. May he Rest In Peace.