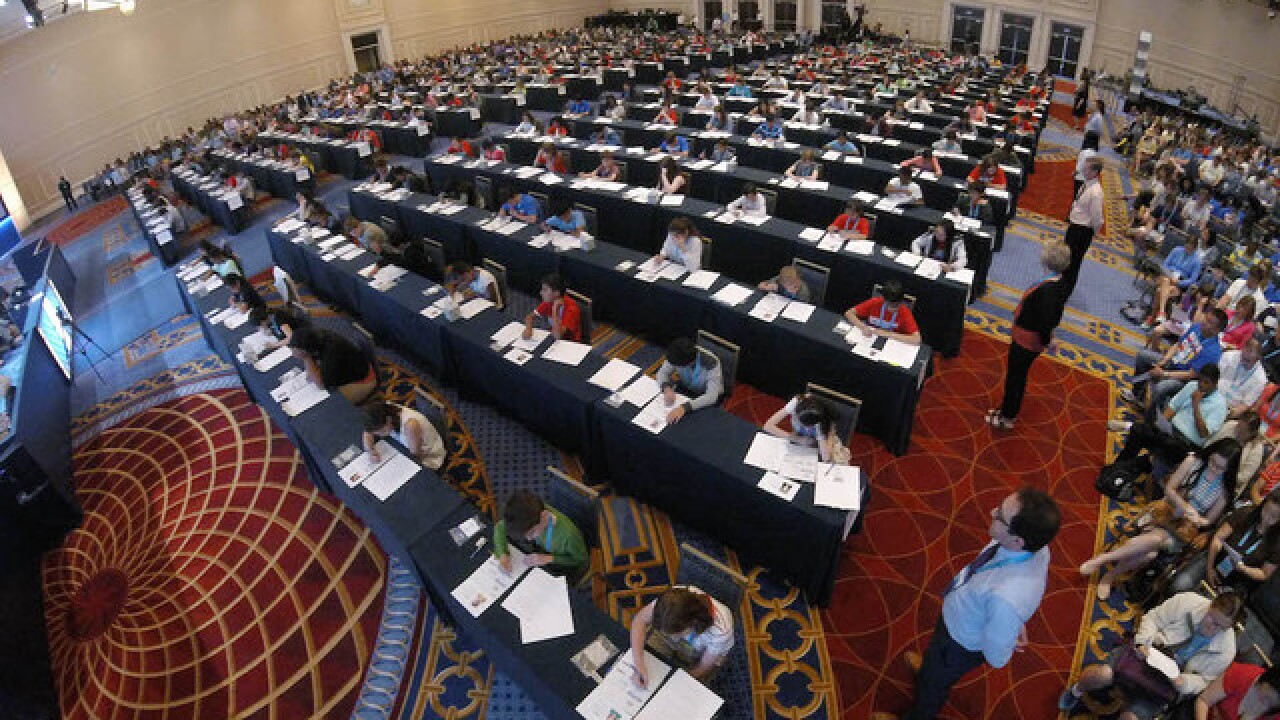 NATIONAL HARBOR, Md. - Before taking the main stage of the 2016 Scripps National Spelling Bee on Wednesday, spellers took a puzzling multiple-choice test Tuesday morning to kick off competition at this year’s Bee.

Spellers will stand behind the microphone before the nation beginning Wednesday at 8 a.m. ET and the competition will be streamed live on ESPN3. All 284 spellers will be asked to spell Wednesday morning. A correct spelling earns a speller a spot in the day’s afternoon round.

Spelling Bee pronouncer Jacques Bailly peppered spellers Tuesday morning with questions on how to spell words, as well as giving the definition of some words. Spellers had just 20 seconds to select the correct answer.

Immediately following Tuesday’s rounds, spellers and their families turned to their smartphones and Google to get an idea of how well they did on the test.

Hannah Pengorso, a sixth-grader from Newcomb, New Mexico, was one of many spellers seen using smartphones to check answers. This is Hannah first year participating in the Bee.

“That was really hard but I am pretty sure I got a few right,” Hannah said. “I feel a little bit better (after using Google to check answers).”

Even for veteran spellers, the exam proved to be challenging. Sylvie Lamontagne, a top-10 finisher in the 2015 Bee said she found the vocabulary section of the test particularly difficult.

“I missed some,” Sylvie said. “I definitely did not get a perfect score, but I think I did well enough where if I spell my two words correctly tomorrow, I’ll be able to advance.”

Up to 50 spellers that successfully spelled two words on Wednesday will advance to Thursday’s final round. Tuesday’s exam could eliminate many spellers, if a lot of competitors perfectly spell both of their words on Wednesday.

“I am really excited (to be on stage), I worked really hard so it will be great to see how it paid off,” said Hannah, who has practiced at least three hours a day for the last two months.

Following Tuesday’s exam, many spellers visited various monuments in and around Washington. Others opted to relax and do some studying before Wednesday’s second and third rounds.

Spelling Bee by the numbers

-       11 international spellers, representing The Bahamas, Canada, Germany, Ghana, Jamaica and South Korea will participate.
-       30 spellers who use English as a second language, speaking 19 different native languages are competing.
-       70 spellers who are returning to the Bee for at least their second Bee. Among the 70 returning spellers, nine have participated in two previous Bees, and one speller is returning for his fourth Bee.
-       75 words make the championship list, an increase from last year’s list of 25, which produced co-champions.