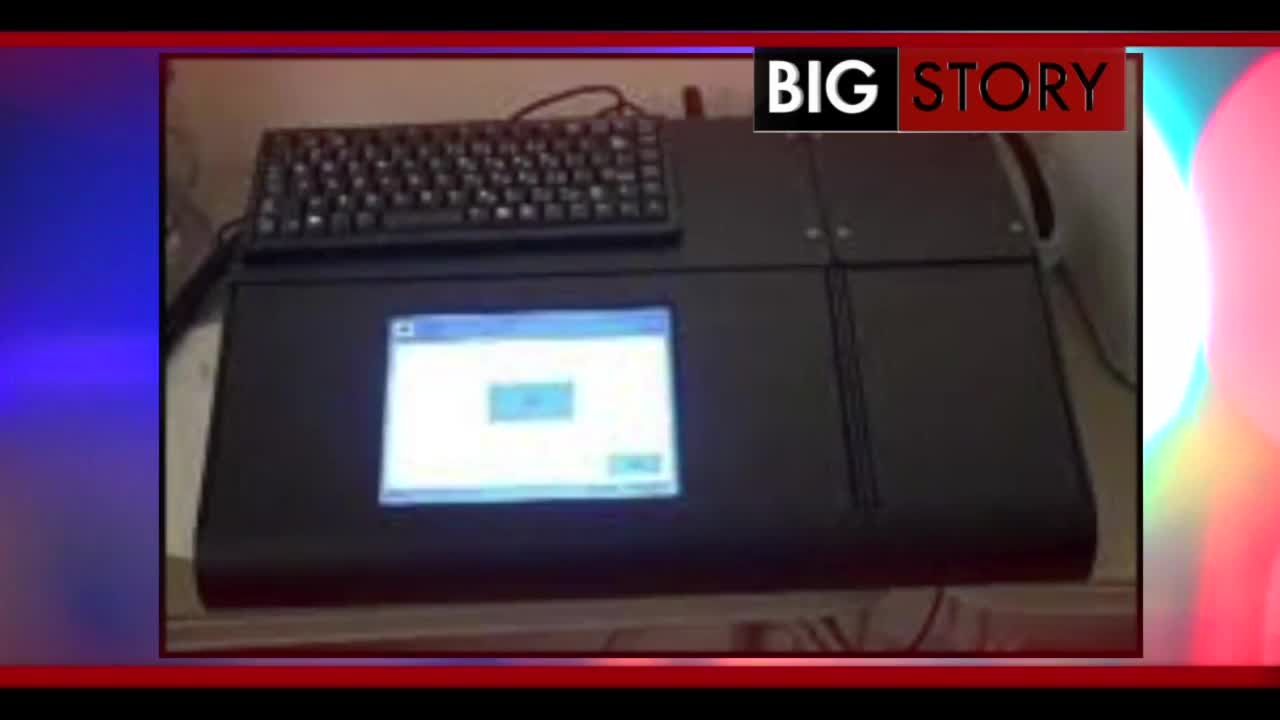 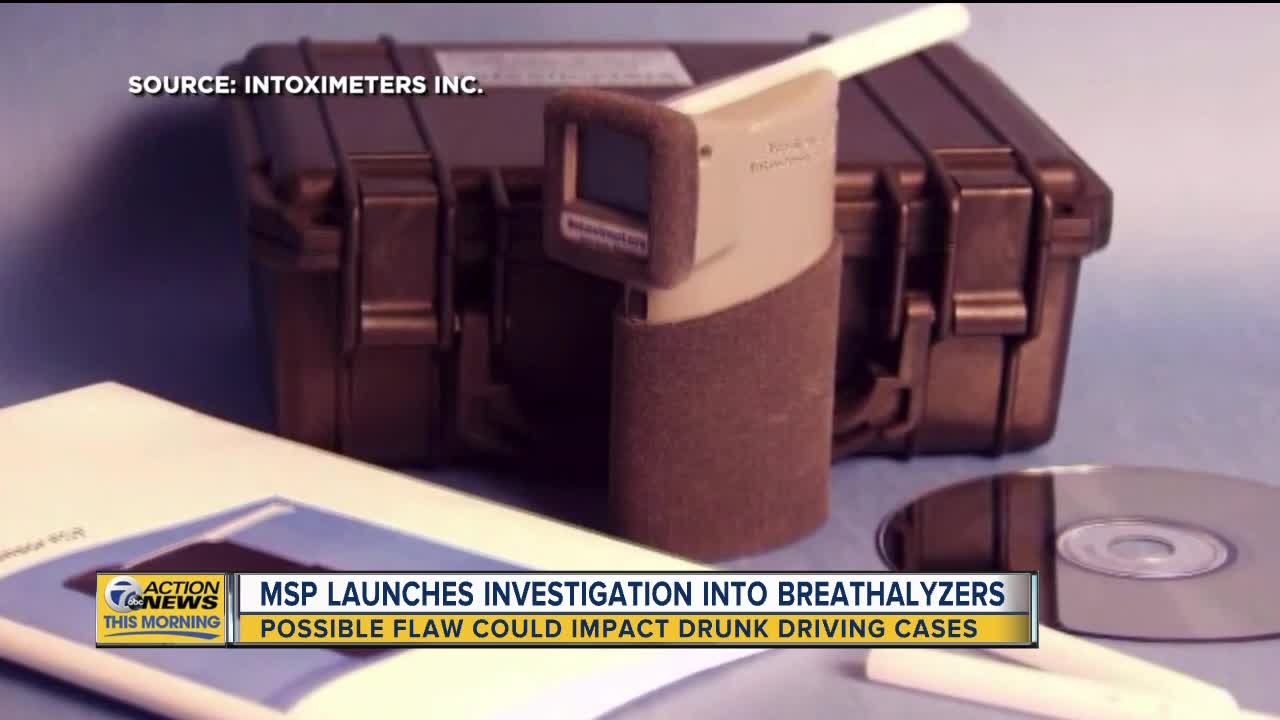 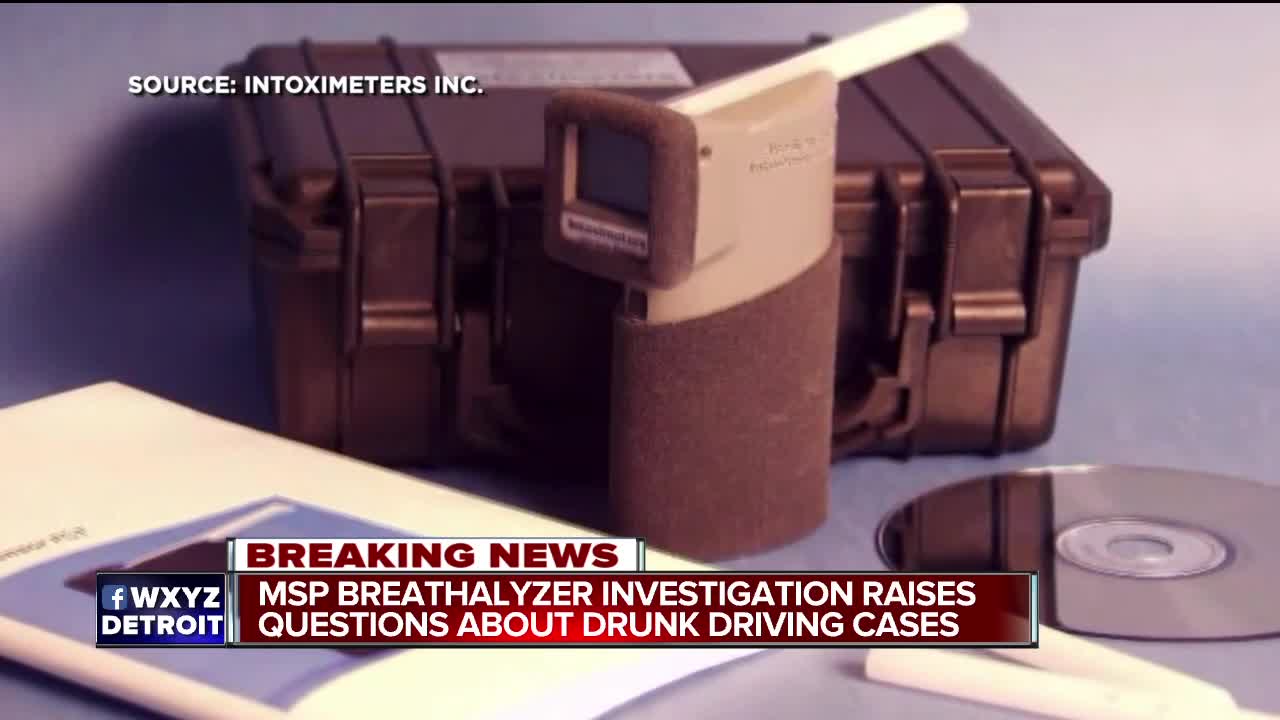 DETROIT (AP/WXYZ) — Michigan State Police has suspended the contract with the company that issues the state's breath alcohol testing devices amid concerns the results could be flawed.

In a letter written to police and prosecutors statewide, state police officials warned law enforcement agencies about “performance-related issues” with the Datamaster DMT breathalyzer devices, according to The Detroit News. Such issues could affect drunken driving cases.

The letter did not identify the problems or how they were uncovered.

State police Lt. Michael Shaw said a stop order was immediately issued as soon as they "noticed some issues with the vendor that was responsible for maintenance and auditing the DataMasters around the state.”

A phone call to the vendor, Intoximeters Inc., of St. Louis, was not returned Saturday.

“We will be (setting) up a unit in order to assume the responsibilities of that vendor,” Shaw said. “Authorities will keep using the devices, but Michigan State Police, not the vendor, will calibrate them,” Shaw said.

State police will also take over the contractor's duties of certifying and serving the breathalyzer units.

Oakland University criminal justice professor Daniel Kennedy said such issues with the breathalyzer devices could be troublesome for drunken driving cases in Michigan.

“This could open the floodgates for appeals,” Kennedy said. “In drunk driving cases, one of the first questions any defense attorney asks is, 'When was the last time the device was calibrated?' So, if they found problems with how these things were being calibrated, that could wind up being one big mess."

Maj. Greg Zarotney of the Michigan State Police Office of Professional Development wrote in the letter that prosecutors with any cases that could have been impacted by the company's errors have already been notified and if any additional errors are found, a report will be immediately forwarded to the affected prosecutor.

East Lansing attorney Michael J. Nichols, who specializes in drunken driving cases, said he doesn't know quite what to make of the situation.

He says the DataMaster is only part of the evaluation of a person's sobriety, but it cannot be fully relied on as proof of how much alcohol is in someone's system.

“Depending on exactly what the errors were and how pervasive they were, I think this could have a huge potential impact,” he said. “I'm a little suspicious about why they sent out this letter. The state is being transparent, and they never do that unless there's more to it.”

Here is the complete MSP statement on the situation:

Based on new information learned over the weekend, the Michigan State Police (MSP) is aggressively investigating potential fraud committed by contract employees of Datamaster vendor, Intoximeters, and also moving today to take all 203 Datamaster DMT evidential breath alcohol testing instruments out of service until MSP can inspect and verify each instrument to ensure it is properly calibrated. In the interim period, the MSP recommends that police agencies utilize blood draws rather than breath tests to establish evidence of drunk driving.

On Jan. 10, 2020, the MSP alerted prosecutors and police departments statewide that it had issued a stop order on the current vendor’s contract due to performance-related issues. The vendor, Intoximeters, employs three contract employees who were responsible for servicing all 203 Datamaster DMT instruments in the state, and it is records from these service sessions that are in question. Effective Jan. 10, 2020, fully certified MSP personnel have taken over responsibility for ensuring all Datamaster DMTs are certified, calibrated and serviced according to state law and industry standard.

Review of vendor records in the last two days has yielded additional discrepancies that may point to the potential for a more widespread issue with the way in which some instruments were being serviced. While the discrepancies do not directly impact or deal with the results of evidential breath tests, it is concerning that it appears as though some certification records have been falsified. As a result, the MSP has opened a criminal investigation that is looking into possible forgery of public documents.

To be clear, a properly calibrated and maintained Datamaster DMT is an extremely reliable instrument, which is why issuing the stop order, placing the instruments temporarily out-of-service and assuming responsibility for maintaining all Datamasters in the state is an extreme move that places a burden on all of the state’s law enforcement resources, but it is an absolutely necessary move to safeguard the integrity of the criminal justice process. Upon learning of additional and more egregious discrepancies, I am no longer comfortable having police agencies using these instruments until we can be confident they are certified, calibrated and serviced according to state law and industry standard.

The MSP will conduct a thorough and complete investigation and if we find criminal acts occurred, we will pursue criminal charges against those responsible. We will also pursue any remediation available to the department, including possible legal action, in order to recoup costs bore by the state.

At this early stage in the investigation, the MSP does not know how many certification records were falsified or how long these deceptive practices were occurring. The MSP sent a letter to Intoximeters in August of 2019 outlining grounds for breach of contract and requesting a corrective action plan. That same month, Intoximeters responded with a corrective action plan. When issues rose again shortly after that, the MSP again contacted Intoximeters and we have been working with them to remedy the issues.

Based on what we know today, we believe these performance issues impact at least two employees of their three contract employees, both of which were hired in 2018. The MSP is still in the process of reviewing vendor records and will be for some time, but possible discrepancies have been identified to-date involving Datamaster instruments at the following locations:

County prosecutors for each of these areas have been notified of the issue and will determine any potential impact on drunk driving cases. When a discrepancy arises, it can be efficiently remedied through proper testing and inspection done by certified personnel.

The MSP has been working since mid-2018 to strengthen the state’s breath alcohol testing program by hiring a technical leader in the MSP Forensic Science Division to provide oversight, and it was through this work that these discrepancies were identified.

Col. Joseph Gasper, Director
Copyright 2020 Scripps Media, Inc. The Associated Press contributed to this report. All rights reserved. This material may not be published, broadcast, rewritten, or redistributed.