Superintendent responds to video of disturbing beating inside Pontiac classroom 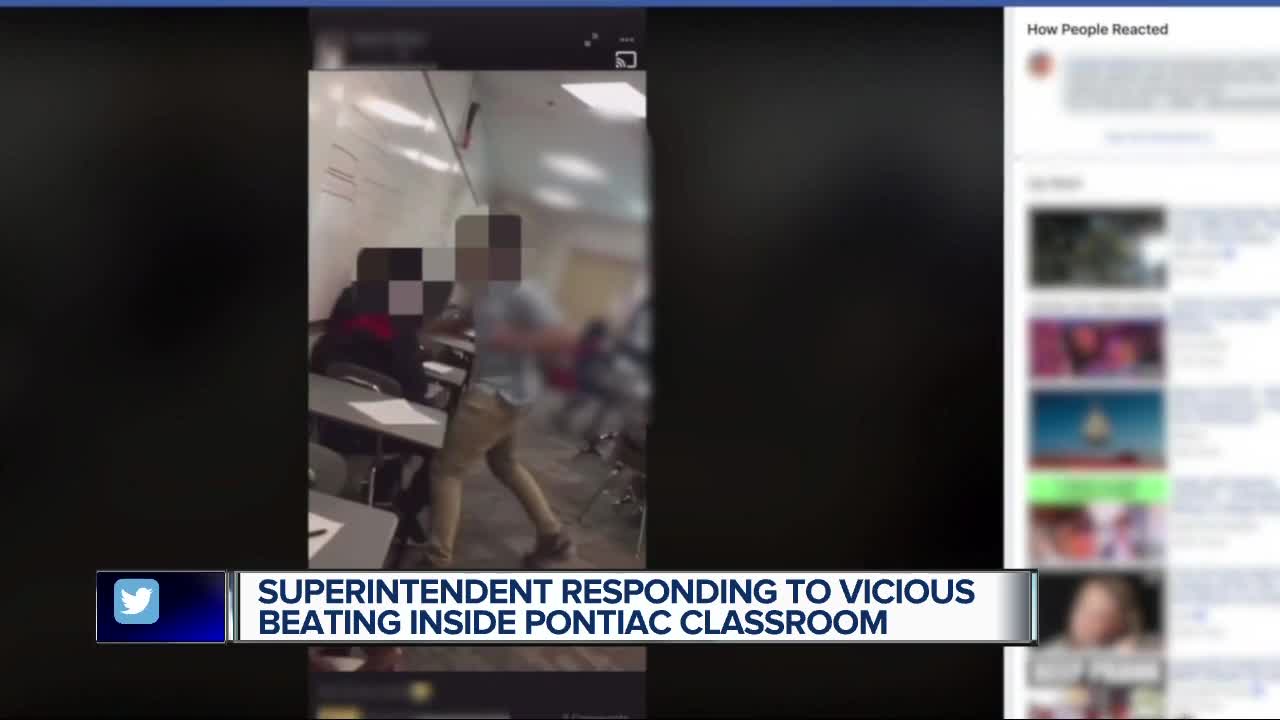 PONTIAC, Mich. (WXYZ) — The Pontiac School superintendent is speaking to 7 Action News about a recent video circling on social media, showing a student being viciously beaten in a classroom.

Superintendent Kelley Williams says this recent video of violence is disturbing and is shining a negative light on the Pontiac School District. She says the district will not tolerate this kind of behavior.

Students then become subject to bullying from their peers when things like this are posted on social media.

A freeze frame of the moment shows a 9th grade student at Pontiac High School punching a 10th grade student. The student is being punched and kicked, dozens of times, while other students stand around and record it on their cell phones.

"We're experiencing a high level of students who are acting out with fighting, channeling negative energy into fighting because they're angry about a video game. And that's what stemmed this last incident." Superintendent Williams says the teacher in the classroom ran into the hallway to get help. She says this incident is something the district is trying to eliminate.

"We have invested a lot of money into wrap around supports with at risk social workers behavioral interventionists," she told 7 Action News' Alan Campbell.

This isn't the first time the Pontiac School District has been in the spotlight. In September, a teenager who lives in Pontiac was shot near Herrington Elementary School. Although the teen didn't go to school in the district, the superintendent decided to close the high school down for the day, because the teen had friends who attended Pontiac High.

"We're going to be as transparent as possible to let our parents know that safety is our number one priority, and we are going to work through these issues," the superintendent said.

In May, parents and community members held a meeting about concerns over student safety. And in April, a 15-year-old student was facing charges for allegedly raping another student inside the high school. That case is still under investigation. Superintendent Williams says this is the kind of behavior that needs to end, but parents need to take a leading role.

"We're talking about the students having a voice. We're listening to them, we're pushing in new technology, new equipment for the schools, new buildings or renovated buildings, we need for our parents and community to support the school district." said Williams. "We can't do this by ourselves."

Superintendent Williams says the student who was the attacker in the video will now have an expulsion hearing, which can carry a suspension of 185 days out of school, and charges are going to be pressed against the students by the Sheriff's Office, and not the parents of the victim.

The other students in the video recording the incident may face disciplinary action as well for having their cell phones out.