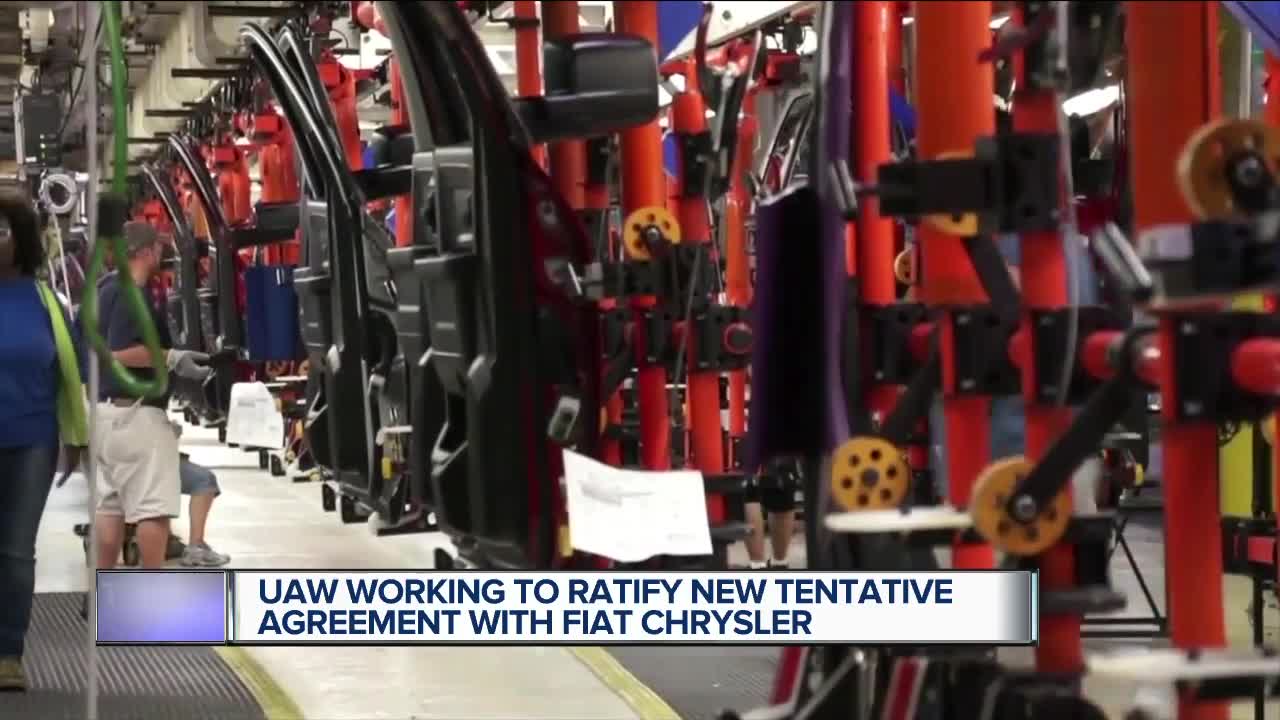 The UAW is taking the first steps toward ratifying the tentative agreement with Fiat Chrysler.

DETROIT (AP/WXYZ) — Fiat Chrysler UAW workers ratified a new 4-year contract, the union announced on Wednesday. The agreement includes a total of $9 billion in investments and passed with 71 percent of the vote.

“Every full-time production employee currently at FCA will be at top rate by the end of this four-year agreement,” said Cindy Estrada, UAW Vice President and Director of the UAW FCA Department. “All temporary workers now have a defined pathway to full time and top pay as well.”

Local leaders assembled last week in Detroit to go over the pact, which includes a $9,000 bonus per worker upon ratification. The company also has promised $4.5 billion worth of new investments in U.S. factories.

The union reached agreement with Fiat Chrysler late last month. The new contract also offers a mix of lump sums and pay raises for longtime workers, full top wages for new hires within four years and a path for temporary employees to become full-time after three years of work.

The Fiat Chrysler contract also adds 12.5% to the union workers' profit-sharing formula, giving them $900 per 1% of profit margin generated North American. That's up from $800, and a $12,000 cap was lifted. The UAW says the deal created more than 7,900 jobs, including a $4.5 billion investment previously announced at two factories in Detroit.

Fiat Chrysler is the last of the Detroit automakers to settle with the union. Workers at General Motors ratified their contract Oct. 31, ending a 40-day strike that paralyzed GM's U.S. factories. Ford workers followed by approving a contract in November.

In a summary of the contract, the union said FCA agreed to extend a moratorium on outsourcing of jobs and will maintain its U.S. manufacturing presence through the life of the contract.

The $9 billion of factory investment includes $4.5 billion previously announced at two factories in Detroit, including a new assembly plant.

Also included is an agreement to build fresh models off the Jeep Cherokee SUV underpinnings and invest $55 million into the Belvidere, Illinois, assembly plant, where the Cherokee is built.

At the Toledo, Ohio, North Assembly plant, which builds the Jeep Wrangler SUV, the company will invest $160 million and hire 100 more people to build a plug-in hybrid version of the Wrangler. The Toledo South plant gets $120 million to keep building the Jeep Gladiator pickup.

At an assembly plant in Sterling Heights, Michigan, Fiat Chrysler will invest $210 million to keep building light-duty Ram pickup and new high-performance version of the truck.

Another truck plant in Warren, Michigan, will get $2.8 billion including engineering and development expenses to keep building the Ram pickup and a new three-row SUV called the Wagoneer and Grand Wagoneer. A plug-in hybrid version of the SUV is coming in 2021.

Mike Booth, president of a UAW local in Marysville, Michigan, north of Detroit, said he made a plea to the leaders at the meeting to reject the deal. Although there was some dissent, the contract was approved on a voice vote, he said.

Under the contract, Booth's factory, which makes truck axles, would be transferred by Fiat Chrysler to auto parts supply company ZF-TRW. The plant's 800 workers are Fiat Chrysler employees and will have to transfer to jobs in Detroit.

Booth alleges that corrupt union officials who were bribed by the company agreed to the change. The union local has sued the international UAW and Fiat Chrysler in an effort to block the transfer.

The International UAW has been rocked by a bribery and embezzlement scandal that began at the jointly run Fiat Chrysler-UAW training center. Two former vice presidents who negotiated with FCA are alleged by federal officials to have taken bribes to influence contract negotiations.