Wait times to get COVID test results can vary — here's why 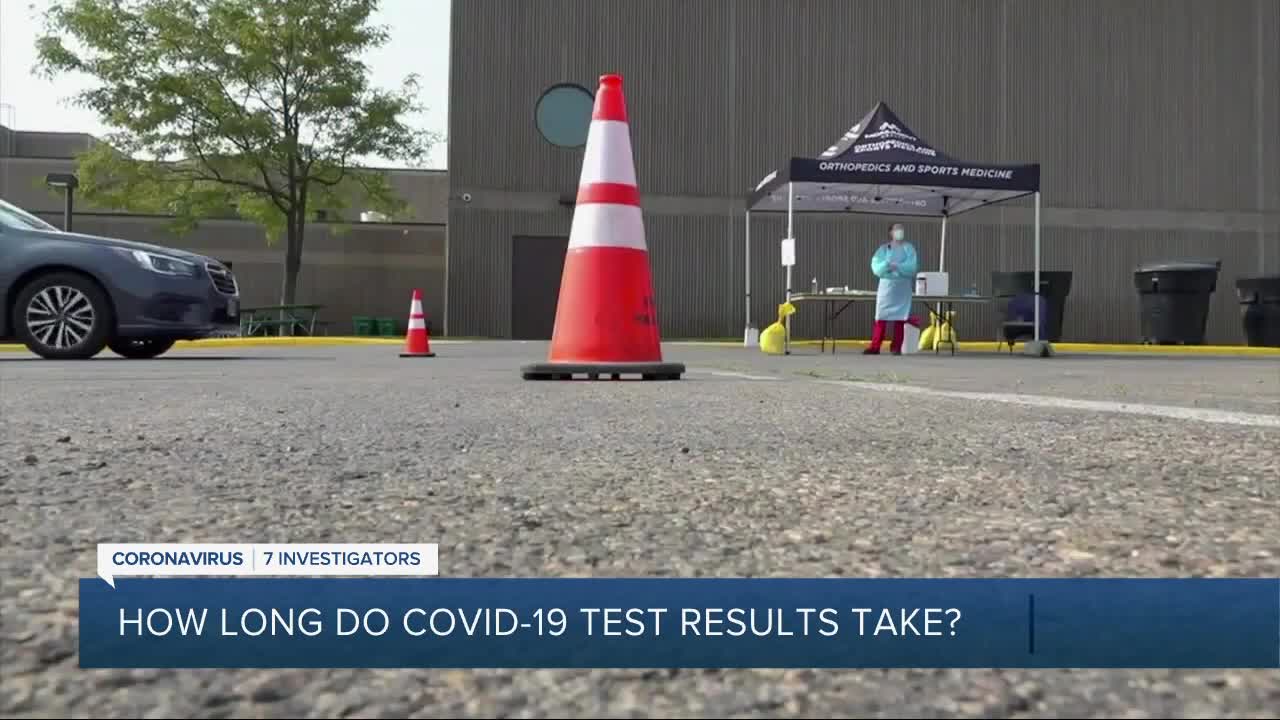 Contracting with a national labs created some calm at the beginning of the pandemic, but their many clients— across the nation — can lead to inconsistent wait times. 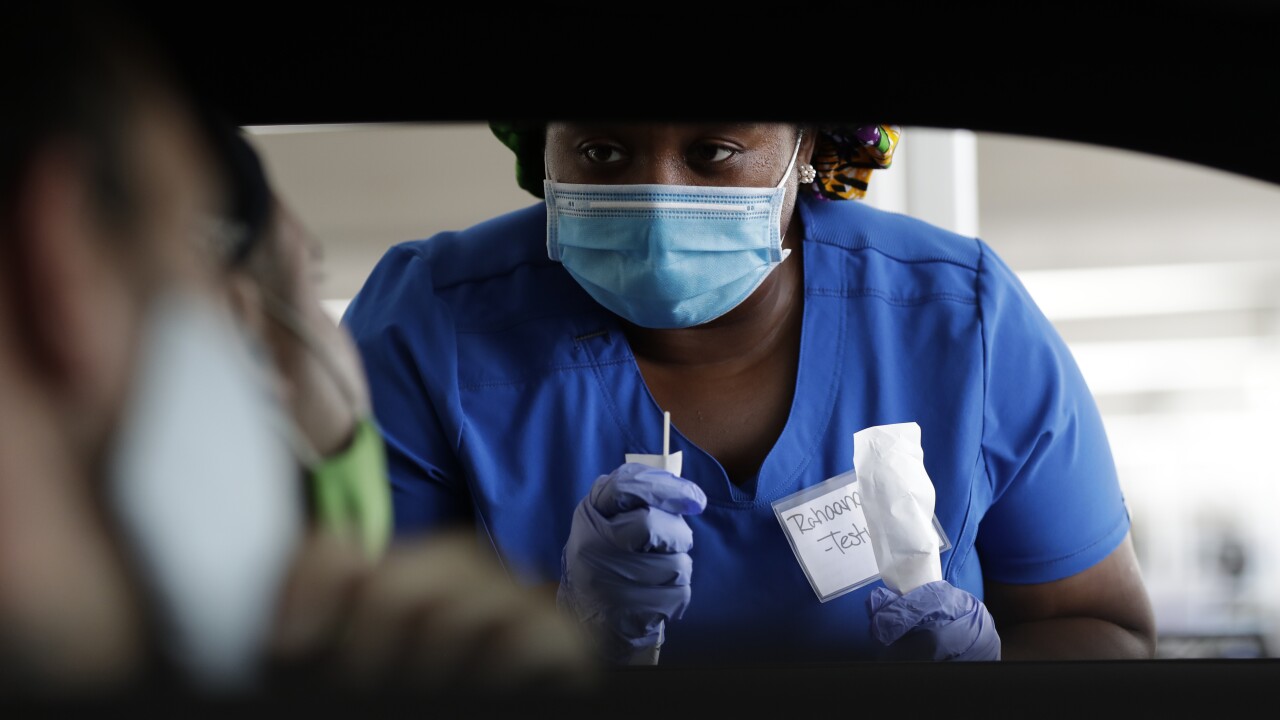 (WXYZ) — When Nate Hahn decided to visit his family in Illinois this past July he thought getting a COVID-19 test before would be a smart — and safe — move.

The 35-year-old went to a metro-Detroit clinic a week before traveling. While the test site indicated that he should get his results within three days — enough time to figure out his status before the trip — it ended up taking six.

"I didn’t get my results by the time I left," said Hahn, "So it sort of defeated the purpose."

The scenario has played out hundreds of times across the state. Even the most fastidious of planners struggle when it comes to timing out a COVID-19 test. But what's causing the delays and uncertainty? According to medical experts, the moving-target comes down to the labs that are being used.

"The more capacity a given lab has, the more samples get sent to that given lab and it overwhelms the lab," said Dr. Phil Levy, who runs a COVID-19 testing site through Wayne Health.

In Michigan, there are over 400 COVID-19 test sites created by medical providers (hospitals, urgent cares, primary cares, pharmacies), as well as some local health departments or local governments. Each site can then contract with a lab of their choosing to process the tests.

These labs, according to Levy, play a major roll in the test-turn around time — especially when they're non-local and fielding requests from regions across the country. He uses Wisconsin — which is currently seeing a spike in COVID-19 cases — as an example.

"Wisconsin all of a sudden it’s a hotbed," he said, "that then has a collateral impact on all the other locations that are sending tests to those labs as well."

According to Levy many municipalities at the start of the pandemic decided to contract with large, national labs to ensure their tests were processed. But as COVID-19 levels increase in other regions — and more people get tested — local wait times can get pushed back as well, even if numbers are dwindling in the state.

This scenario played out in the City of Detroit who in March signed a $1.4 million contract with New Jersey-based Bio Reference to help process COVID-19 tests at the State Fairgrounds.

"When we went to Bio Reference there was no one in Michigan that had it and could do it, the testing kits were not there. That’s how we established the relationship," said Hakim Berry, City of Detroit Chief Operating Officer, who helped set up the State Fairgrounds site as a way to help alleviate some of the pressure local hospitals were facing to get testing done.

"During the height of the pandemic, we were shipping out twice a day to New Jersey, sending the samples on dry ice. We were doing up to 1200 a day at its height," Berry continued, adding that at the time results were coming back in three to four days.

But as Michigan's COVID-19 cases began to dip the wait times for COVID-19 tests at the State Fairgrounds began to increase.

"As our numbers went down, everywhere else in the country went up, so that’s when our test results started taking seven days, because they were getting slammed by other hot areas," said Berry, who explained that at this point the city began looking for local labs to help ensure that testing at nursing homes could continue without new lag times.

"We had a concern about senior care facilities, senior home apartment complexes and the like, adult foster care and we didn't have enough of the Abbott Rapid Tests at that time," said Berry, explaining that at that time the city began working with Jackson, MI based Garcia Lab.

"It really helped us to address and control the spread among the senior population," said Berry.

This use of local labs is, according to Levy, a key-factor in testing turnaround.

"Everybody looked to the big lab companies first, figured that’s just the simplest way to do it. They became overwhelmed and there wasn’t the ready accessibility of these smaller labs to run the tests," he said, explaining that he also initially was using a national lab — Quest — for his testing of frontline workers at the start of the pandemic, but soon had to look for other solutions.

Today he works with a number of local labs. But finding them wasn't easy.

"The relationships that we’ve developed with labs have come either through someone who knows somebody or somebody who knows we’re in the testing business so to say and has reached out to us," said Levy, explaining that it's still very much a word-of-mouth system.

One lab he works with is NxGen in Grand Rapids.

Prior to COVID-19 the lab focused on genetic testing, working with OBGYNs across the country. They made the transition to COVID-19 tests in the winter when they saw the pandemic coming closer to home. But even as they made the shift, they still say they're not operating at full capacity.

"We started reaching out to I call them the three Fs: friends, family, and fools and asking them for help and connecting us with the right people," said CEO Alan Mack, explaining that while NxGen could process 9,000 tests daily, it is only processing only about 2,500 tests.

"We didn’t have some magical Rolodex that put us in touch with all the hospitals and all the other laboratories," he said, explaining that in May he actually reached out to some of the bigger, national testing companies to see if he could take on some of their cases to help reduce times.

"We reached out to a couple of them to say, 'hey we have unused capacity, we’d love to be able to help you out'" he said, explaining the response was a resounding no.

"They told us to go pound sand and they don’t need our help, he said, adding: "At the same time there are a lot of patients waiting two weeks for their results."

While big testing labs being inundated with tests from other states can play a role in test turnaround time, Mack contends there are other factors at play. He points to supply scarcity still impacting test-turn around.

In September, for example, Henry Ford Health System told the state that while they had the capacity to turn around 1,500 tests a day. Supply constraints, however, reduced that number to only 670 tests. They were still, however, running 1,400 tests daily.

When hospital labs are overwhelmed, according to Mack, they can send out tests to outside labs. The NxGen CEO, however, said this doesn't always happen.

"It amounts to about $24 per sample loss when they send these samples out," he said, pointing to the fact that Michigan is a "no mark up" state, which means hospitals must charge what a lab charges, even if they lose money sending a sample out.

"If they’re having to send thousands of these per day well," he continued, "that adds up very quickly and it becomes a significant financial issue for that institution."

According to the Michigan Department of Health and Human Services, the current turnaround time for a COVID-19 test is two to three days. But this statement comes with an important caveat: "turnaround time varies by laboratory."