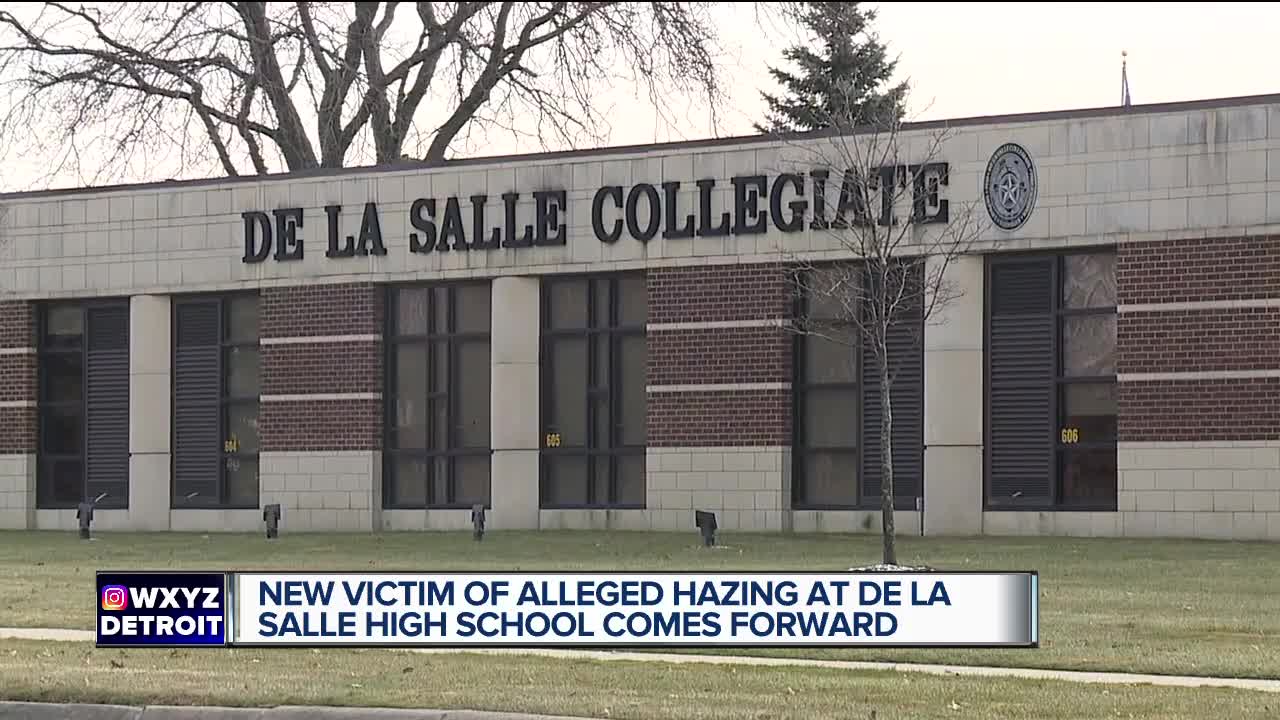 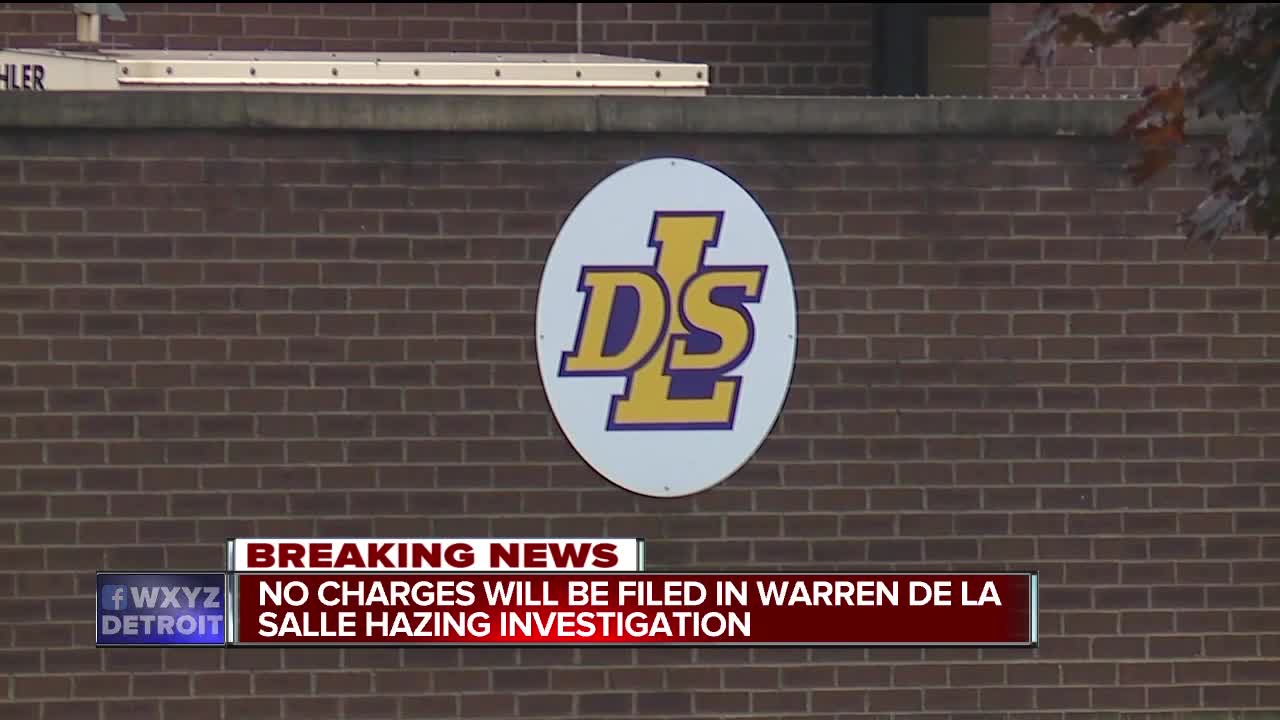 We're told a parent of an alleged victim told police they would cooperate, just one day after the St. Clair County Prosecutor declined to press charges.

"Earlier this morning, we had a call from a concerned parent and we confirmed that his son, he is indicating, was a victim. He was disappointed that no charges came forward, but those charges didn't come forward only because the De La Salle administration didn't cooperate with the prosecutor's office," Warren Police Commissioner Bill Dwyer told 7 Action News. "He's indicated that he's coming in to make a police report today relative to his son being a victim of a hazing incident at De La Salle."

"Based upon all the information made available for our review, it is the opinion of our office that criminal charges cannot be substantiated at this time," wrote County Prosecutor Michael D. Wendling in a letter released Tuesday. "While we are confident that a criminal incident did occur, we do not have admissible evidence to move forward with prosecution."

The review included an independent examination by the St. Clair County Prosecutor's Office. That review included re-contacting and re-interviewing witnesses, attempting to speak to all victims in the case, speaking to school administrators and coaching staff at De La Salle, and attempting to gain access to all evidence and reports surrounding the case, the prosecutor's office said Tuesday.

With that being done, Wendling says there is still a lack of evidence to bring about charges.

"The lack of evidence is the result of multiple circumstances that are beyond our control," he said. "By the time the Warren Police Department had been contacted in relation to this incident important evidence had already been lost or destroyed."

In light of our commitment to keep you informed on important items, we wanted to provide you with an update on several issues. The past few months have been difficult for our De La Salle Collegiate community. We have sought to cooperate with the prosecutor’s office and law enforcement authorities at all levels and with all things. We continue to appreciate how difficult their work is and will continue to cooperate fully with them as together we create a safe and positive learning environment.

While we have not been contacted by the prosecutor’s office with respect to any decision regarding its hazing investigation, we feel that it is important to respond to the recent media reports. The first priority of the leadership at De La Salle is to provide an education of excellence to every student reflective of our Lasallian Catholic values. In all cases, our commitment is to act with the best interests of our students and their families. We recognize that people of integrity will not always agree on all decisions, however, we will always seek to work for what is best for our students.

For instance, when the leadership at De La Salle was notified of a hazing situation, an internal investigation was immediately conducted. Within 24 hours of determining that hazing had in fact occurred, we contacted an assistant prosecutor, and upon being redirected to the police department, we immediately contacted and sought to work with local law enforcement officials. During their investigation, our leadership team spoke with and actively provided information to them.

Several media headlines implied the loss or destruction of evidence; however, we have no knowledge of evidence being lost or destroyed. Several areas were beyond our control. While there are no security cameras in the locker room, there are security cameras in the hallways. As a result, the police department requested tapes over the time when the hazing occurred. We acknowledged that our taping system is designed to loop and tape over after 14 days. The report of possible hazing did not occur until after that 14-day period and thus those tapes were automatically taped over and lost. This is a design feature that comes with a 14-day taping system. We are considering other options as we look to update the system.

The state of Michigan and the federal government not only require that the school work with law enforcement in situations like this, the school is mandated by law to conduct its own internal investigation. The difficult issues that the police and prosecutor acknowledge in their investigation were also true for the school. Individuals, coaches, and families generally refused to talk about what occurred, often upon the advice of legal counsel outside of the school. These roadblocks slowed the process and prevented all sides from gathering information regarding what was happening.

In addition, De La Salle hired a third-party investigator to review the situation. That individual also discovered how difficult it was to gather information. After the investigator confirmed in a phone conference that he had expended his budget and ran into multiple roadblocks (similar to the prosecutor’s office) the school decided to expand the investigation internally.

Information was obtained that students in the locker room were not always supervised which made hazing incidents possible. The football coach was released, and additional information became available thereafter. This information was shared with the prosecutor’s office and with law enforcement. No report was completed by the investigator.

Again, we have appreciated the efforts of law enforcement and the prosecutor’s office to support the work of the school and to support our commitment to maintaining a safe and positive learning environment for our students. We will continue to work proactively with law enforcement on safe school initiatives in the years to come.

In the coming 6-8 weeks, the Board will be engaging in several processes to speak with you as parents, donors, and alumni to identify key issues of concern, areas of affirmation, and trends or areas where additional work could occur. This information will help to inform long-term strategic decision-making both to analyze and learn from this incident and as a precursor to our strategic planning process. We will keep you informed of those opportunities in the weeks to come.

Thank you for your ongoing support and your commitment to De La Salle. We remain committed to a positive and safe learning environment that allows every student to succeed both in school and in life.

Wendling adds that additional factors resulted in the decision not to file charges, including the Warren Police Department not being contacted until after an internal investigation was completed at the school. Also, documents and reports that were created during the school's own independent investigation have been withheld at the suggestion of their legal counsel.

Victims and their families didn't provide "sufficient information," which may have been due to pressure from peers, parents of students and school faculty, he added.

And although some criminal cases can bring charges even with non-cooperating victims, in this instance, for charges to be filed the prosecutor's office says "other legally admissible evidence must be present."That independent evidence couldn't be secured in this case, Wendling said.

Ultimately, a lack of cooperation and transparency from the school is what led to no charges being filed.

"Moreover, staff meetings and board meetings where the incident and discipline of these students/suspects was addressed were not open to the general public and no minutes or discussion notes have been provided," according to Wendling. "The non-cooperation from De La Salle staff is especially upsetting considering that they are the people who have an obligation to protect these children and are mandated to report any misconduct."

Macomb County prosecutor Eric Smith recused himself from the case because one of the office's senior assistant prosecutors is a potential material witness in the case. That created a conflict of interest that "precludes us from making the necessary charging decisions on this case."

The school abruptly canceled their football season in November after claims varsity players used broomsticks in a sexual manner to haze younger players in the locker room ritual.

Police say there was no penetration. Out of 87 players, police say 18 have refused to talk.

The students involved in the investigation filed a lawsuit, claiming they are being discriminated against due to their race. They note that of the 13 students initially implicated, the only students who were suspended are minorities, while the remaining ten students have faced "no discipline whatsoever" and are Caucasian.

According to the lawsuit, the three students have been suspended for 46 days. Two of the students are in danger of not graduating. The lawsuit states that they were approached by De La Salle administrators at the direction of its president, John Knight, and have been asked to implicate other students in order to get back into the school.