Wolves on Isle Royale are adapting well, feeding on moose and beaver 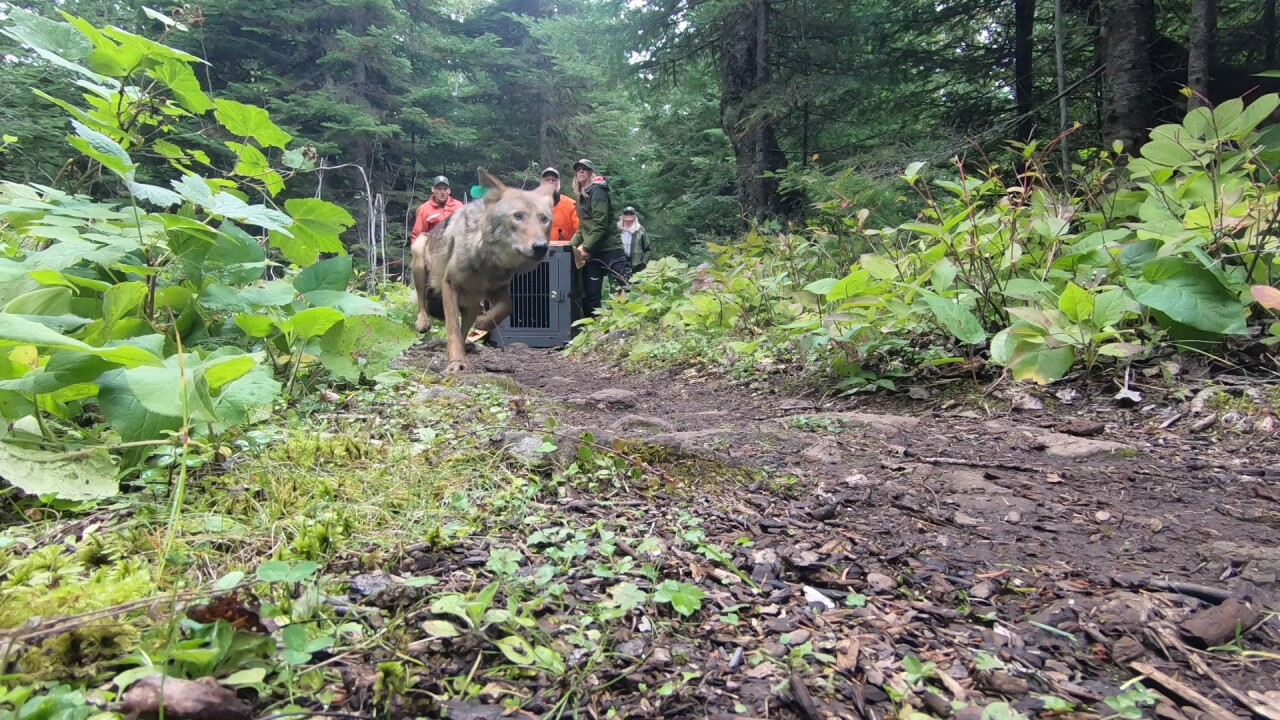 Third Wolf runs down the trail just after release while NPS staff observe in the fall of 2019.

According to the parks service, the wolves are feeding on moose and beaver population on Isle Royale.

The parks service and the State University of New York – College of Environmental Science and Forestry (SUNY-ESF) completed summer predation monitoring by the wolves, which were introduced to the island in the fall of last year and winter o this year.

This is the first time the parks service has been able to monitor the wolves during snow-free periods.

They used GPS data from the wolves to identify "clusters" of locations where wolves spent extended periods of time. From May through October, the crews visited 381 sites.

At the sites, researchers found the remains of 60 prey, which were primarily moose, beavers and snowshoe hares.

According to the parks service, a 54.5% of the prey were moose, and 63.4% of the moose were calves. This demonstrated that "introduced wolves had few problems adjusting to this larger prey."

“Combining recent advances in technology with our knowledge of predator-prey relations will provide new insights, not only in the year-round foraging ecology of wolves on Isle Royale, but their overall role in this island ecosystem,” said Dr. Jerry Belant, Professor at SUNY-ESF and collaborative partner on wolf research.

Researchers from the parks service, SUNY and Michigan Tech will continue to document wolf predation each winter and summer to monitor the restoration of wolves on the island and the effects on the island's moose population.

“Restoring wolves is really about restoring integrity and resiliency to the ecosystem; making the ecosystem whole. Capturing the effects on the ecosystem as a result of our management actions is paramount to measuring the success of the program”, said Mark Romanski, Division Chief for Natural Resources at Isle Royale NP and project coordinator for the wolf translocation efforts.

In March, a team of Americans and Canadians worked to relocate about half a dozen gray wolves to Isle Royale. It included six wolves from a second Lake Superior Island in Canadian territory and one from Ontario.

Then, in September, three more wolves were introduced on Isle Royale – two males and a female – bringing the population to 17 wolves. Those wolves were from the Upper Peninsula, and were important to add genetics from Michigan wolves.

“Adding genetics from Michigan wolves was a key piece of the puzzle to provide the best opportunity for genetic diversity that supports the sustainability of the introduced population. The Michigan DNR, APHIS - Wildlife Services, and SUNY-ESF did an outstanding job, given the weather,” Green said. “Our focus now will be on broad population goals and the opportunity these Michigan wolves represent. We will continue to learn what we can and track how the wolves integrate into the island landscape.”

The program of re-introducing wolves is in the first phase of a multi-year effort to rebuild wolf numbers on the island.