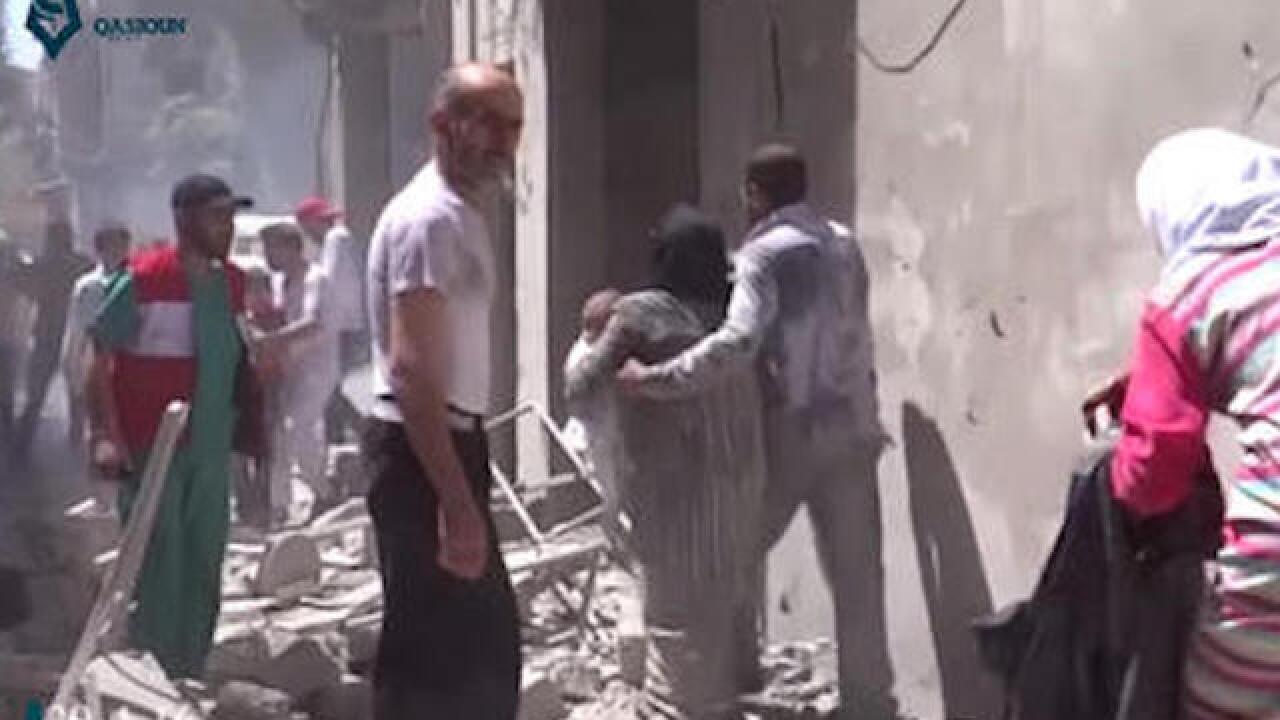 Qasion News Agency via AP
Uncredited
<p>This Friday, April 29, 2016 image made from video released by Qasion News Agency, a media opposition platform that relies on a network of activists on the ground, shows people scrambling through rubble following airstrikes in Aleppo, Syria. Syrian state TV says dozens of people have been killed or wounded when rebels fired rockets into a government-held neighborhood of the northern city of Aleppo. The TV says one of the rockets fired on Tuesday, May 3, 2016 hit the Dubeet hospital in the central neighborhood of Muhafaza. (Qasion News Agency via AP)</p>

DAMASCUS, Syria (AP) — An airstrike hit a crowded refugee camp in Syria on Thursday close to the border with Turkey, killing at least 28 people, according to Syrian pro-opposition activists. Images posted on social media said to be of the aftermath of the strike showed at least a dozen tents burned to the ground and bloodied women and children being loaded onto a pickup truck.

The camp in Sarmada, in rebel-held territory the northwestern Idlib province, is home to between 1,500 and 2,000 internally displaced people who fled the fighting from the surrounding Aleppo and Hama provinces over the past year, according to activist Mohammad al-Shafie in the town of Atareb, about 12 kilometers (7.5 miles) from the camp.

The Britain-based Syrian Observatory for Human Rights said 28 died while the Local Coordination Committees, another activist group, said more than 30 were killed. Footage on social media showed charred bodies and men pouring buckets of water on fires that erupted within the camp.

The attack came just hours after a twin bombing in the central province of Homs killed at least 10 people and wounded scores, state media and the regional governor, Talal Barrazi, said. A car bomb first exploded in the main square of village of Mukharam al-Fawkani, located about 45 kilometers (28 miles) east of the central city of Homs, Syria's third-largest.

As people gathered to help the victims, a suicide bomber riding a motorcycle detonated his explosives belt nearby. Four children and three women were among those killed, Syrian state TV said, and as many as 49 were wounded in the attack.

There was no immediate claim of responsibility but the Islamic State group has claimed to be behind several similar deadly attacks in Homs province. The area of the blasts is close to where Syrian troops and IS gunmen have been fighting for control of the vital Shaer gas field, which fell to the Islamic State on Wednesday after the extremists overran 13 government checkpoints and captured a Syrian soldier. The Observatory said 34 government troops and 16 militants have been killed in three days of fighting there.

Meanwhile, relative calm prevailed in the northern city of Aleppo, which has been the center of violence in recent weeks following a truce announced the day before by U.S. officials in agreement with Russia, in an effort to extend Syria's fragile cease-fire to the deeply contested city. The Syrian military said the truce would last only 48 hours.

Syrian President Bashar Assad said in a letter to the Russian president that Aleppo will eventually be victorious, comparing the Syrian government forces' resistance in the city to the protracted World War II battle of Stalingrad.

In Aleppo, Syrian state media reported some violations of the truce, saying militants fired more than 20 shells into government-held parts of the city, where 280 civilians have been killed over the past two weeks, according to the Observatory. The activist group said Thursday's shelling killed one person.

Civilian Deaths Caused by the War in Syria | Graphiq

In his letter to Vladimir Putin, which was carried on Syrian state media, Assad vowed that Aleppo and other Syrian cities and towns will defeat "the aggression" the way the Soviet Red Army defeated Nazi forces in Stalingrad.

"Aleppo today, as well as all Syrian cities embrace the heroic Stalingrad and pledge that despite the viciousness of the aggression ... our cities, villages, people and army will not accept anything less than defeating the aggression," Assad said.

It was unclear why Assad was making the comparison, but the rhetoric could be playing to Russian patriotic sentiment ahead of Victory Day next week — May 9 marks the capitulation of Nazi Germany to the Soviet Union at the end of World War II.

Also Thursday, renowned Russian conductor Valery Gergiev led the Mariinsky orchestra from St. Petersburg in a concert at the ancient Syrian city of Palmyra, badly damaged by IS extremists who held the town for 10 months before Syrian troops captured it under the cover of Russian airstrikes in March.

The concert, dubbed "With a Prayer for Palmyra," was to support the restoration of the UNESCO heritage site and in honor of the victims of Syria's war. It was held in the town's amphitheater and the audience included Russian servicemen as well as Russian sappers who have been doing demining in the town to remove bombs left by IS militants, who badly damaged the world famous archaeological site at Palmyra.

In opening remarks, Gergiev said that with the concert, "we protest against the barbarians who destroyed monuments of world culture."

There was also a video linkup in which Putin addressed the audience, saying he regards the concert "as a sign of gratitude, remembrance and hope."

The rockets were fired from IS-controlled territory in Syria, according to the private Dogan News agency. It said one policeman was among the wounded. The agency carried photographs of damaged buildings and vehicles.

Such incidents have become a regular occurrence in the border town, which is home to a significant Syrian refugee population. Cross-border fire has left 20 people dead and dozens of others wounded this year.

The Turkish military typically fires back in line with its rules of engagement and Turkish President Recep Tayyip Erdogan warned IS on Wednesday that no attack on Turkey would go unanswered.

A Lebanese TV station embedded with the Syrian army says Syrian rebels are waging an offensive on a government-held village south of the city of Aleppo. Al Mayadeen TV, broadcasting live from near the fighting, says armed groups launched their assault for Khan Touman earlier in the afternoon on Thursday.

The TV says government jets are bombing rebel positions outside the village. Bomb blasts are seen in the station's feed from the hilly countryside.