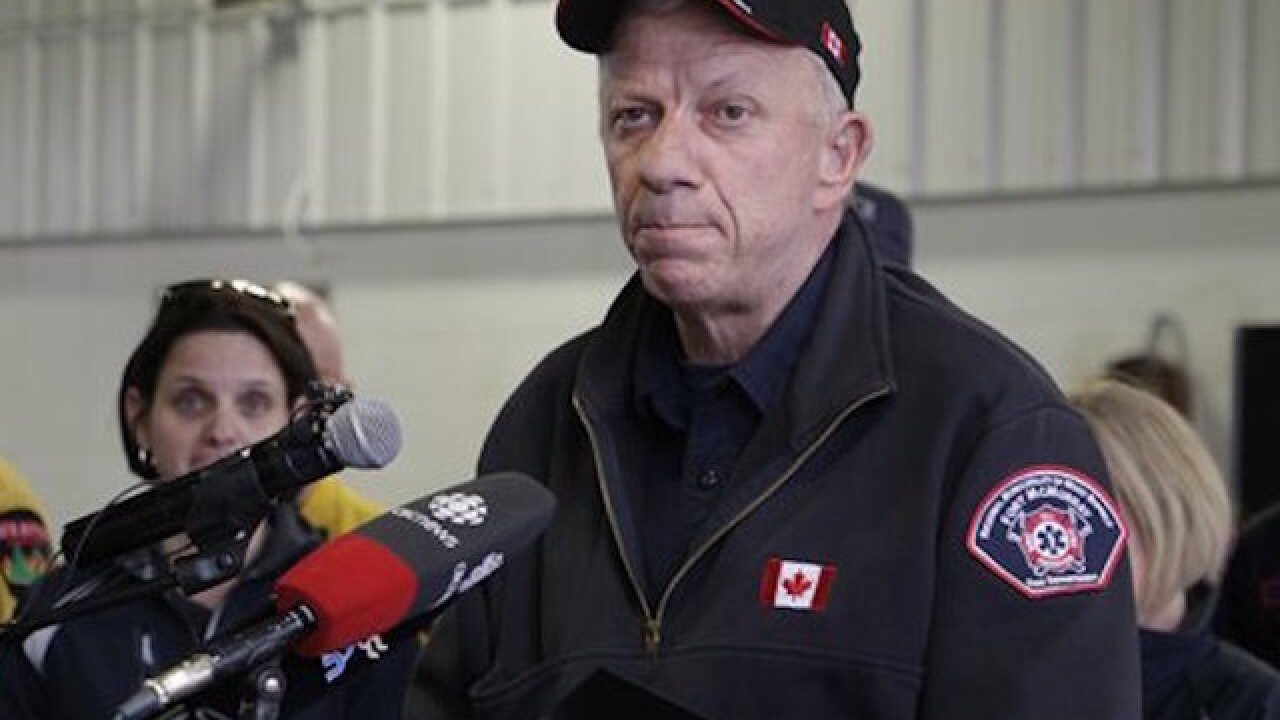 Copyright Associated Press
Rachel La Corte
<p>Fort McMurray, Alberta, fire chief Darby Allen speaks to members of the media at a fire station in Fort McMurray, Monday, May 9, 2016. A break in the weather has officials optimistic they have reached a turning point on getting a handle on the massive wildfire. (AP Photo/Rachel La Corte)</p>

FORT MCMURRAY, Alberta (AP) — Alberta's premier planned to meet with oil industry officials on Tuesday to discuss the impact of a massive wildfire and how they can ramp up production after she declared Canada's main oil sands city has been largely saved.

Officials said 85 percent to 90 percent of Fort McMurray remains intact, including the downtown district and the oil mines to the north. About 2,400 homes and buildings were destroyed, but officials said firefighters saved 25,000 others in the city, including the hospital, municipal buildings and every functioning school.

Alberta Premier Rachel Notley said a plan will be put together within two weeks so most of the 88,000 evacuees can return to their homes. The fire continues to grow outside the city in Alberta's vast boreal forest after merging with another one and now is about 884 square miles (2,090 square kilometers) in size. That includes areas already burned and currently burning.

The fire has forced as much as a third of Canada's oil output offline and was expected to impact an economy already hurt by the fall in oil prices. Alberta's oil sands have the third-largest reserves of oil in the world behind Saudi Arabia and Venezuela. Its workers largely live in Fort McMurray, a former frontier outpost-turned-city whose residents come from all over Canada.

Analysts at Goldman Sachs estimated the wildfire has reduced Canada's oil sands production by a million barrels per day, but said in a note the lack of damage to the oil mines could allow for a fast ramp up in production. They noted, however, that the complete evacuation of oil workers and city residents could point to a more gradual recovery.

The bulk of the city's evacuees moved south after a mandatory evacuation order, but 25,000 went north and were housed in camps normally used for oil sands workers until they also could be evacuated south. Most are now staying with family and friends or have returned to homes elsewhere in Canada, including many who have homes on Canada's Atlantic coast where there are fewer jobs.

Alberta Health Services Dr. Chris Sikora said a stomach virus broke out among 105 evacuees in Edmonton, Alberta, including 75 people quarantined at the Northlands center where about 400 are now staying and where up to 6,000 meals a day are being prepared for evacuees staying at hotels or with family and friends. Symptoms include nausea, vomiting and diarrhea. He said they are still investigating a cause.

Gerry Clarke, the emergency reception center manager, said about 16,200 people passed through the Northlands center and 11,700 have registered to use the facility for eating, clothing and other needs. He said the overnight lodging decreased from 600.

No deaths or injuries have been reported from the fire itself, but two people died in a traffic accident during the evacuation.

Notley got her first direct look at the devastation on Monday after cold temperatures and light rain had stabilized the massive wildfire to a point where officials could begin planning how to allow residents to return. The break in the weather left officials optimistic they've reached a turning point in getting a handle on the massive wildfire.

At least two neighborhoods in Fort McMurray became scenes of utter devastation with incinerated homes leveled by the wildfire that the city's fire chief called a "beast ... a fire like I've never seen in my life." But the wider picture was more optimistic.