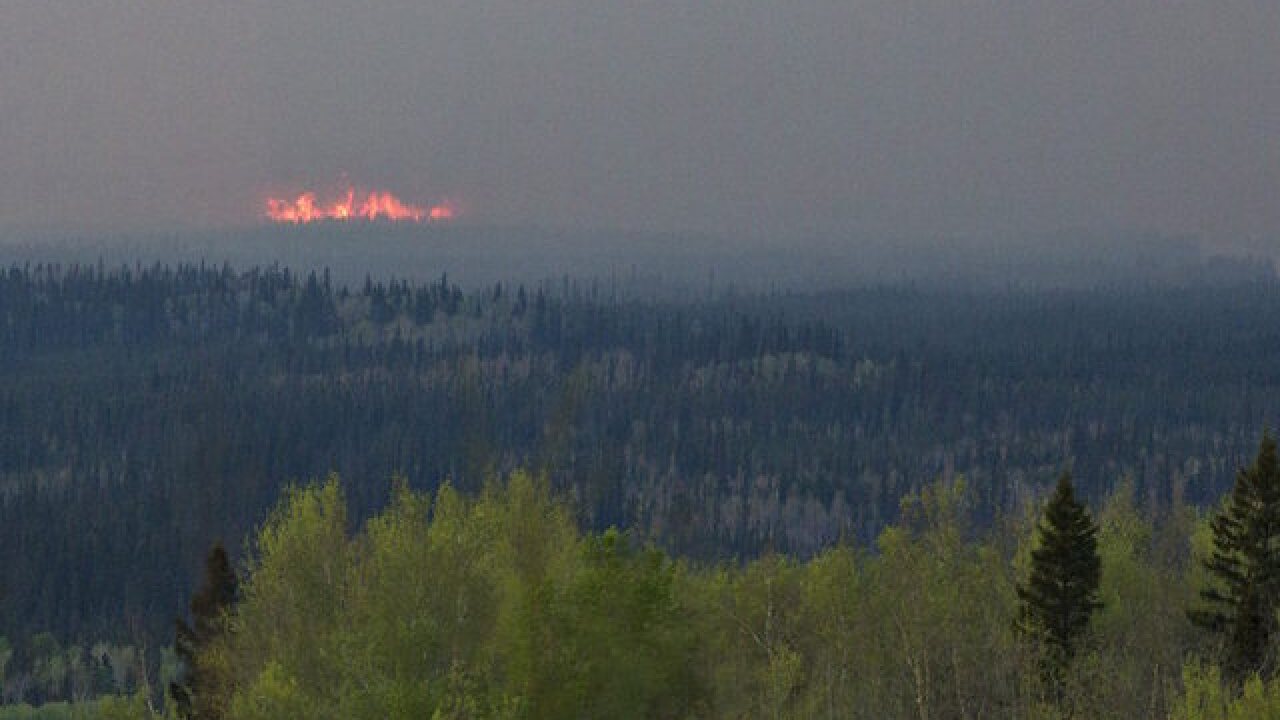 Jason Franson
<p>A wildfire flares up near Fort McMurray, Canada, Thursday, May 5, 2016. Canadian officials will start moving thousands of people from work camps north of devastated Fort McMurray in a mass highway convoy Friday morning if it is safe from the wildfire raging in Alberta. (Jason Franson/The Canadian Press via AP) </p>

FORT MCMURRAY, Alberta (AP) — Alberta's premier will get a first look at the devastated parts of Canada's oil sands town of Fort McMurray on Monday after the fire stabilized to the point where officials are beginning the next phase of the government's plan to get residents back home. Cooler temperatures and light rain have officials optimistic they've reached a turning point on getting a handle on a massive wildfire.

Alberta Premier Rachel Notley said the battle against the fire has stabilized to the point where she and the mayor will tour Fort McMurray's fire-ravaged neighborhoods.

"There will be some dramatic images coming from media over the next couple of days," Notley said. "I want to reiterate mental health supports are available for anyone who needs help."

More than 80,000 people have left Fort McMurray in the heart of Canada' oil sands, where the fire has torched 1,600 homes and other buildings. Gas has been turned off, the power grid is damaged and water is not drinkable. More than 250 officials are working to restore power grid and assess gas infrastructure. Officials said there is no timeline to return residents to the city, but the provincial government is sending in a team on Monday to do preliminary planning.

David Yurdiga, the member of Parliament for the area, toured Fort McMurray Sunday and said he was now more optimistic.

"We'll be back on our feet a lot quicker than I thought we would be," he told reporters at the roadblock just south of the city. "All of the key infrastructure is in place. Our hospital is standing. Our schools are standing. Our treatment plant is functioning."

"I toured probably every neighborhood in Fort McMurray and 80 percent of the homes are standing," he said. "Some areas you don't even know there was a fire."

With cooler temperatures forecast for the next three or four days, Alberta fire official Chad Morrison said firefighters should be able to put out hot spots. And it has allowed them to further protect Fort McMurray. He said he was very buoyed and happy that they are making great progress.

"It definitely is a positive point for us, for sure," said Morrison, who answered yes when asked if the fight to contain the flames had a reached a turning point.

"We're obviously very happy that we've held the fire better than expected," he said. "This is great firefighting weather. We can really get in here and get a handle on this fire, and really get a death grip on it."

Notley said the wildfire grew much more slowly than was feared and was now about 620 square miles (1,600 square kilometers) in size. She said the blaze was quite a bit smaller than had been expected on Saturday, when officials expected it to double in size. She added the city was safe for first responders.

It rained on Sunday, and the municipality of Wood Buffalo, which includes Fort McMurray, tweeted a picture of the rainfall and wrote: "It was only for a few minutes but the sight of rain has never been so good." Notley retweeted the picture and wrote "Here's hoping for much more!"

Federal Public Safety Minister Ralph Goodale said they "may be turning a corner" but cautioned it's too early to celebrate and a lot of work remains.

Officials completed the transport of 25,000 residents out of work camps north of the city after police oversaw a procession of thousands of vehicles Friday and Saturday, and a mass airlift of thousands of evacuees was also employed from the oil mine airfields. The bulk of the city's evacuees moved south after Tuesday's mandatory evacuation order, but 25,000 evacuees moved north and were housed in camps normally used for oil sands workers.

No deaths or injuries have been reported from the fire itself. But Notley mentioned two evacuees who died in a traffic accident during the evacuation. Her voiced cracked when talking about the two and noted it is Mother's Day. Fifteen-year-old Emily Ryan and her stepmother's nephew, Aaron Hodgson, died in the accident.

The images of Fort McMurray are one of devastation — scorched homes and virtually whole neighborhoods burned to the ground.

The fire and mass evacuation has forced as much of a third of Canada's oil output offline and was expected to impact an economy already hurt by the fall in oil prices. The Alberta oil sands have the third-largest reserves of oil in the world behind Saudi Arabia and Venezuela. Its workers largely live in Fort McMurray, a former frontier outpost-turned-city whose residents largely come from elsewhere in Canada.

Morrison said the fire has not reached the Suncor or Syncrude oil sands facilities north of Fort McMurray and that the mines north are not under threat. Notley said there will be a meeting with the energy industry on Tuesday to discuss the state of the facilities and the impact on operations.

Suncor said late Sunday it is beginning to implement its plan for a return to operations. Analysts at Goldman Sachs estimated that the wildfire has reduced Canada's oil sands production by a million barrels per day, but said in a note the lack of damage and the mining nature of most of the outages could allow for a fast ramp up in production. They noted the complete evacuation of personnel and of the city could point to a more gradual recovery.

Fort McMurray Fire Chief Darby Allen asked for the patience of residents who are eager to find out if their homes are still standing.

"We are really working hard on that, it's a complicated process, what's damaged, what's left," Allen said in a posted video. "We really will get that to you as soon as we possibly can."

Saskatchewan Emergency Management Commissioner Duane McKay said there is heavy smoke in south west Saskatchewan, but no imminent threat of fire to any communities in the province that neighbors Alberta.

Lac La Biche, Alberta, normally a sleepy town of 2,500 about 175 kilometers (109 miles) south of Fort McMurray, was helping thousands of evacuees, providing a place to sleep, food, donated clothes and even shelter for their pets.

Jihad Moghrabi, a spokesman for Lac La Biche County, said that 4,400 evacuees have come through The Bold Center, a sports facility in town.