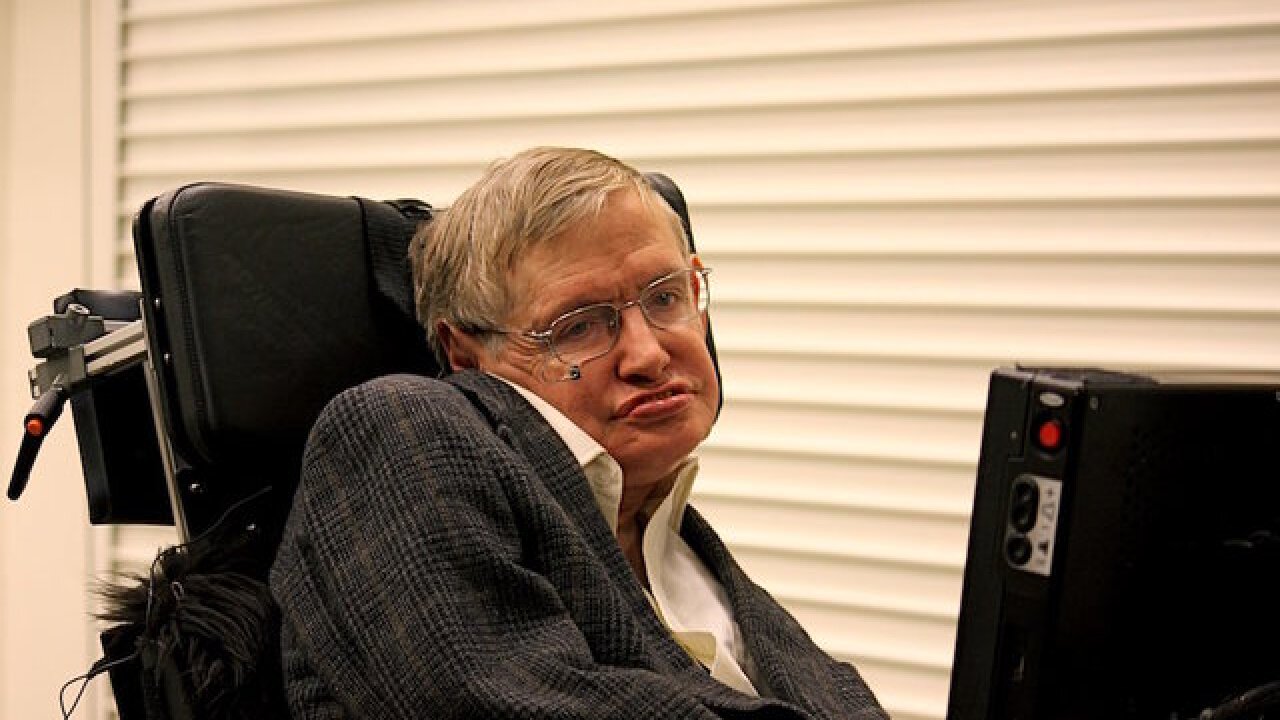 © 2018 Cable News Network, Inc.
Carey Bodenheimer/CNN
<p>Stephen Hawking may be among the stars now, but he has managed to gift the world one more research paper, published this week in the Journal of High Energy Physics.</p>

Renowned physicist Stephen Hawking spent his life teaching the world about space, so it is only fitting that part of him will end up among the stars.

As Hawking's ashes were interred between the graves of Charles Darwin and Sir Isaac Newton at a memorial service on Friday at Westminster Abbey, an antenna in Spain was to beam his voice out into space, toward a black hole.

Hawking, a committed atheist who spent much of his life researching black holes, died in March at age 76 after battling a motor neurone disease for 55 years.

His voice will be set to original music

Greek composer Vangelis -- yes, the "Chariots of Fire" guy -- set the physicist's voice to an original piece of music for the occasion. It is meant to send a message of peace and hope, Hawking's family said in a statement.

Mark McCaughrean, senior adviser for science and exploration at the European Space Agency, told CNN the musical piece is about six-and-a-half minutes, with a voice-over by Hawking in the middle. He said it's pretty somber and is about considering the Earth as a place people come from and need to look after.

Scientists were to use the Cebreros antenna in central Spain to send the recording toward 1A 0620-00, the nearest known black hole -- some 3,500 light years from Earth. It's one of the most famous black holes in the universe, McCaughrean said.

After the ceremony, the music was due to be played at a reception for people in attendance. Every person there will receive a CD with the piece of music, which will be released to the public at a later date.

"It's a nice story overall, and we're very honored to have been asked to do this," McCaughrean said. "Hawking is a highly influential scientist and public figure. This is a lovely, beautiful symbolic gesture."

The recording will become locked just outside the black hole -- but black holes don't last forever, McCaughrean said. They evaporate over billions and billions of years by emitting Hawking radiation -- named for the late physicist, of course.

"It's his own radiation which will actually cause it to disappear in the end," McCaughrean said.

Hawking's family is thankful for the memorial service -- and that his voice will travel to space.

"We are so grateful to Westminster Abbey for offering us the privilege of a Service of Thanksgiving for the extraordinary life of our father and for giving him such a distinguished final resting place," Hawking's children said in a statement.

"This is a beautiful and symbolic gesture that creates a link between our father's presence on this planet, his wish to go into space and his explorations of the universe in his mind," Stephen Hawking's daughter, Lucy Hawking, said.

Actor Benedict Cumberbatch, who played the scientist in a 2004 BBC biopic, were among those giving readings at the ceremony, according to the Stephen Hawking Foundation.

Addresses and readers were also given by Astronaut Tim Peake and two of Hawking's oldest professional friends, cosmologist Martin Rees and Kip Thorne, an American physicist and Nobel Prize winner.

A public lottery decided which 1,000 members of the public would join the Hawking family and their guests at the service. Around 25,000 people applied for tickets.

"We believe it to be vital that science and religion work together to seek to answer the great questions of the mystery of life and of the universe," said the Dean of Westminster, the Very Rev. Dr. John Hall, when the location for the internment was announced.

Isaac Newton was buried at Westminster Abbey following his death in 1727, as was naturalist Charles Darwin a century and a half later in 1882.

Many considered Hawking to be the greatest scientist of his generation, overcoming a debilitating disease to gain a worldwide following for his brilliant work in theoretical physics.

He was born in Oxford, England, in 1942 on the 300th anniversary of the death of astronomer and physicist Galileo Galilei.

Along with fellow physicist Roger Penrose, Hawking merged Einstein's theory of relativity with quantum theory to suggest that space and time began with the Big Bang and would end in black holes.

He also published hugely popular books that allowed readers to join him in probing the mysteries of the universe. His landmark "A Brief History of Time" sold more than 10 million copies.

In 1963, shortly before his 21st birthday, Hawking was diagnosed with amyotrophic lateral sclerosis, a neuro-degenerative disease, and although he required a wheelchair and a speech synthesizer, Hawking lived for many years beyond the prognosis.