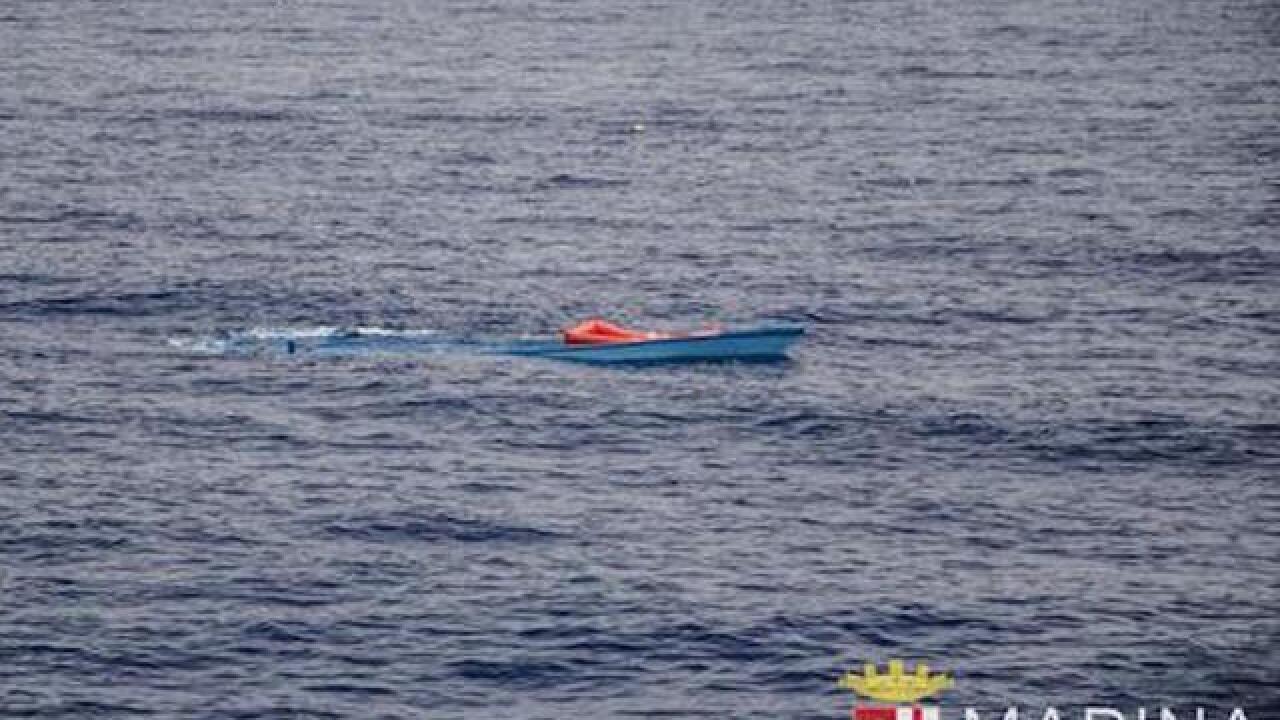 Copyright Associated Press
Raffaele Martino
<p>In this photo taken in the Mediterranean Sea, off the Libyan coast, Friday, May 27, 2016 it is shown the partially submerged boat a group of migrants were using to try to reach the Italian coasts. The Italian navy says it has saved 135 migrants from a sinking boat and recovered 45 bodies in the Mediterranean. (Raffaele Martino/Marina Militare via AP Photo)</p>

ATHENS, Greece (AP) — Four bodies were recovered and 340 people rescued Friday after a boat carrying migrants across the Mediterranean Sea sank south of the Greek island of Crete, authorities said.

The coast guard said the roughly 25-meter (82-foot) vessel, which resembled a large fishing boat, had been carrying an undetermined number of people when it was located half-sunk about 75 nautical miles south of Crete in international waters, and within Egypt's search and rescue area of operation.

Most survivors were to be transported to Italy, with others to be taken to Egypt, Malta and Turkey, the coast guard said.

Greece sent three patrol vessels, a military airplane and three helicopters, while five passing ships were participating in the rescue operation and one more was on its way. The coast guard said the operation was continuing to locate any potentially missing passengers from the migrant boat.

It was not immediately clear where the boat's passengers were from, or where the vessel had set off from or was heading to.

"The information we have on the number of people on board the vessel is still unclear — we've heard that there were 400 or 500 people on board, but we cannot confirm that number," Coast Guard spokesman Nikos Lagadianos said.

"There is a huge rescue effort underway."

The short crossing from the Turkish coast to Greek islands was the preferred route for migrants heading to Europe until Balkan countries closed their borders and the European Union reached an agreement with Turkey to stem the flow of people.

Under that deal, those arriving on Greek islands from March 20 onwards face deportation back to Turkey unless they successfully apply for asylum in Greece, a financially troubled country few migrants or refugees want to stay in.

The deal has led to a dramatic decrease in the number of people arriving on Greek islands from Turkey. The coast guard said it and European border patrol agency Frontex had rescued 164 people in four separate incidents Thursday off the islands of Lesbos and Chios. Before the EU-Turkey deal, thousands would arrive each day.

However, the agreement has led refugees and migrants to seek alternative routes, with many attempting the much longer and more dangerous crossing from north Africa towards Italy. Hundreds have died in the past few weeks when overcrowded boats attempting the crossing sank.