Indonesia earthquake: More than 5,000 people could still be missing 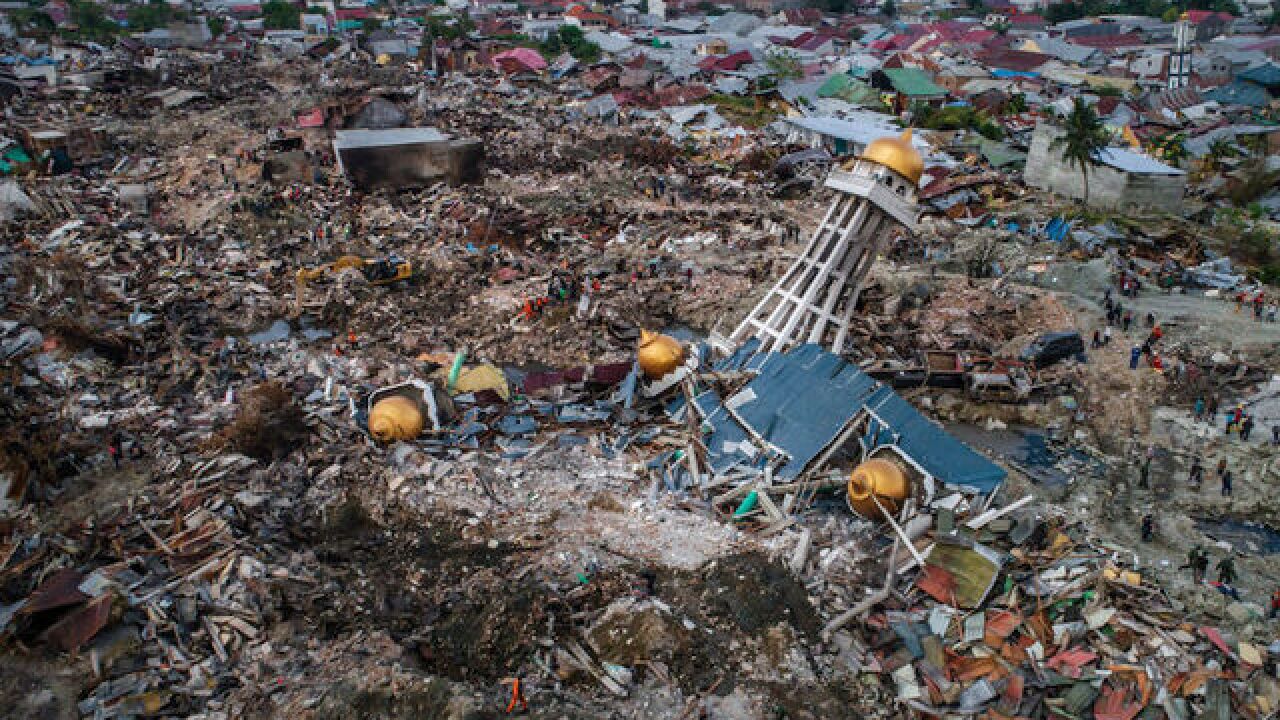 Image copyright 2018 Getty Images. All rights reserved. This material may not be published, broadcast, rewritten, or redistributed.
Ulet Ifansasti
<p>A general view of Balaroa village following the earthquake on October 6, 2018 in Palu, Central Sulawesi, Indonesia. The death toll from last week’s earthquake and tsunami has risen to at least 1,558 but power had returned to parts of the city and fuel shipments have begun to flow back. A tsunami triggered by a magnitude 7.5 earthquake slammed into Indonesia's coastline on the island of Sulawesi which destroyed or damaged over 70,000 homes as tensions remain high with desperate survivors trying to secure basics like clean water and fuel for generators.</p>

More than 5,000 people could still be missing in Indonesia, following a powerful earthquake that hit the island of Sulawesi last week, officials said on Sunday.

Thousands of people are believed to be missing in the towns of Baleroa and Petobo, where rivers of soil swept away entire neighborhoods in the aftermath of a 7.5-magnitude earthquake and ensuing tsunami on September 28.

Almost all of the dead have been buried in mass graves. Another 62,000 people have been displaced by the disaster, Nugroho said.

The spokesman estimated that 5,000 people could still be missing in Baleroa and Petobo, which had been badly hit by soil liquefaction -- a process where the soil becomes saturated with water, causing it to erupt into torrents that topple buildings.

In the days following the quake, more than 1,000 houses in the towns were buried under rivers of soil.

In the city of Palu, home to about 350,000 people, footage showed people running to find solid ground as structures were destroyed by waves of undulating earth.

"Liquefaction occurs when loose sandy soils with shallow groundwater are subjected to sudden loading such as shaking from an earthquake," explained Jonathan Stewart, a professor in the Civil and Environmental Engineering Department at the University of California, Los Angeles.

"During the earthquake, water pressure is generated in the soil, which causes a dramatic loss of strength," added Stewart. "The strength loss can be so great that the soil behaves almost like a liquid."

The process is thought to have played a key role in other earthquakes, such as those in Japan and New Zealand, both in 2011.

Meanwhile in Sulawesi, 82,000 military, civilians and volunteers continue in the search and rescue effort, even as the island had been rocked by 451 aftershocks since the powerful quake.