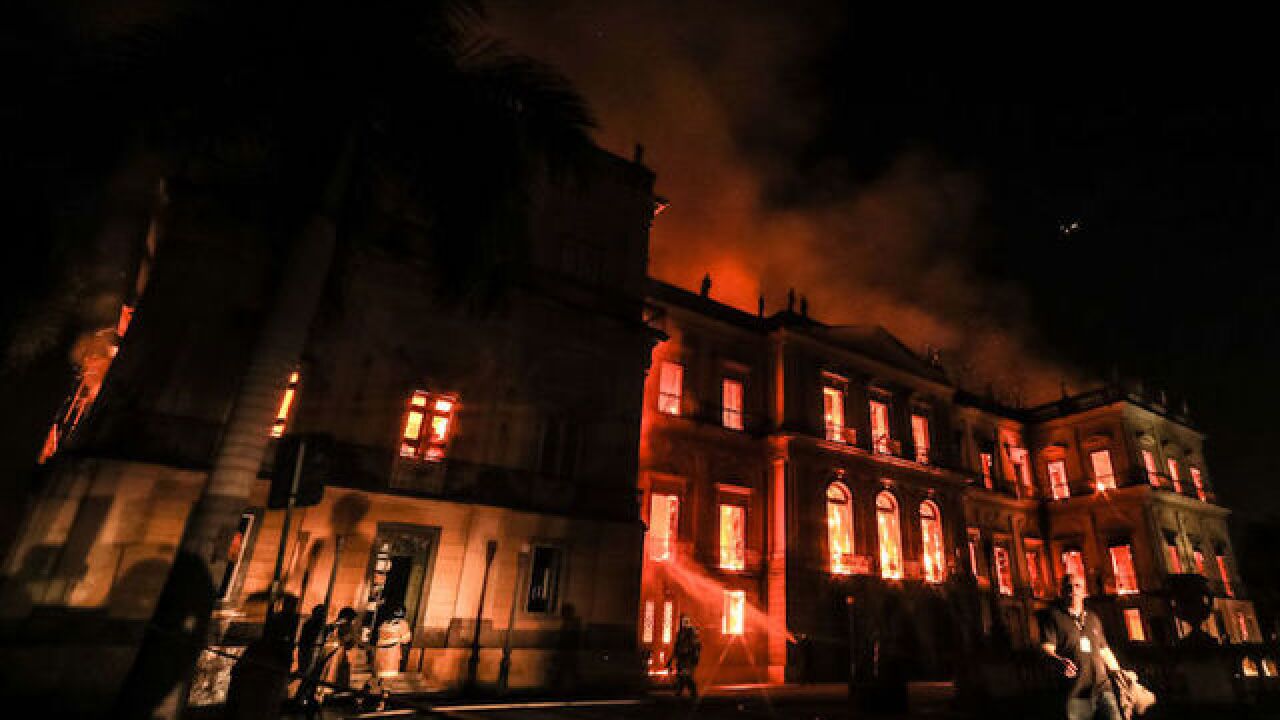 Image copyright 2018 Getty Images. All rights reserved. This material may not be published, broadcast, rewritten, or redistributed.
Buda Mendes
<p>A fire burns at the National Museum of Brazil on September 2, 2018 in Rio de Janeiro, Brazil. The museum, which is tied to the Rio de Janeiro federal university and the Education Ministry, was founded in 1818 by King John VI of Portugal. It houses several landmark collections including Egyptian artefacts and the oldest human fossil found in Brazil. Its collection include more than 20 million items ranging from archaeological findings to historical memorabilia. </p>

Police in Rio de Janeiro clashed with hundreds of protesters Monday amid growing outrage over the cause of a fire that destroyed Brazil's oldest and most important historical museum.

The 200-year-old National Museum of Brazil was left gutted after a devastating blaze tore through the beloved institution late Sunday night. Though the extent of the damage remains unknown, aerial images show widespread damage throughout the building, which was home to an estimated 20 million artifacts spanning 11,000 years.

Protesters took to the street following reports linking the fire with government spending cuts and inadequate maintenance of key infrastructure, including the building's sprinkler system.

Outside the National Museum, several people tried to storm the gates and enter the grounds of the still smoldering building. Television and still images showed police in riot gear using pepper spray to contain the crowd.

Officials from Rio's Civil Defense department said in a statement Monday that access to the building had been blocked for security reasons. "Our technicians conducted an inspection inside the building Monday morning and verified that the building is still at high risk of collapsing."

The protestors, most of whom were students from Rio's Federal University (UFRJ), were later allowed temporary access to the courtyard outside the museum in order to give the building a symbolic "hug."

The National Museum is a part of the UFRJ and dependent of public funding. Many of the protestors gathered claimed funding intended for restoration and renovation projects had been diverted by the government.

During the blaze, firefighters arrived at the scene only to find two hydrants did not have enough pressure to work properly, according to Roberto Robadey, a spokesman for Rio de Janeiro fire department. Fire crews had to draw water from a nearby pond instead, said Robadey.

The building was equipped with a sprinkler system, but it was inadequate, according to Brazilian Minister of Culture Serguio Sá Leitao.

Many are now pointing the finger at Brazilian President Michel Temer and his predecessor, Dilma Rousseff, who they accuse of fiscal mismanagement in the lead up to and aftermath of the 2016 Rio Olympic Games and 2014 World Cup. Those events cost millions of taxpayer dollars, all while public institutions like the museum have complained of their own funding dry up in recent years.

A project to improve the fire system had been approved in June, and the funds were expected in October, Roberto Leher, dean of the Rio de Janeiro Federal University, told reporters Monday.

"There was no other obstacle for the funds to be liberated," he said. "The entire process with the Brazilian Development Bank was concluded."

'A lobotomy of the Brazilian memory'

On Monday, President Michel Temer called the loss "insurmountable." However, one of his opponents in the upcoming presidential election, Marina Silva, was less conciliatory, describing the fire as equivalent to "a lobotomy of the Brazilian memory."

Silva called it a "tragedy foretold" due to the recent budget cuts to public institutions of higher education.

Most of the museum's collections are now feared lost, including priceless indigenous artifacts from the pre-Colombian period.

Some items housed in an adjacent building -- including a library with 500,000 volumes -- were saved, Museum Deputy Director Luis Fernando Dias Duarte said.

Video uploaded to social media appeared to show that a famed meteorite found in 1784 survived the fire intact, surrounded by debris.

The palatial National Museum building used to be the home of a Portuguese royal family. Almost exactly 200 years ago, it was converted into a museum.

It housed artifacts in areas such as biological anthropology, archeology, ethnology, geology, paleontology and zoology, according to its website.

It was home to "Luzia," a skull and bones more than 11,000 years old (the oldest human remains ever found in Brazil); Andean mummies; and an impressive collection of ancient Egyptian artifacts.

As news of the inferno spread, employees, researchers and academics rushed to the museum. Many shed tears as they watched flames consume the building.

"This is 200 years of work of a scientific institution -- the most important one in Latin America," Marco Aurélio Caldas, who worked at the museum for nine years, told Agência Brasil. "Everything is finished. Our work, our life was all in there."

Agência Brasil said officials carefully removed remains of debris, such as lumber, shingles, and even metal beams, in the hope of finding something of historical value. About 15 museum employees entered the building on Monday afternoon to briefly recover items.

The work is slow and meticulous, as many pieces may still be in a condition to recover, beneath tons of burned wood and clay tiles, the news agency reported.

"Very little will be left," preservation director João Carlos Nara told Agência Brasil. "We will have to wait until the firefighters have completed their work here in order to really assess the dimension of it all."

Officials said they will focus on rebuilding the museum.

"We are hoping to start an international campaign to mobilize collectors that would be willing to donate or sell their collections," said Sá Leitão.