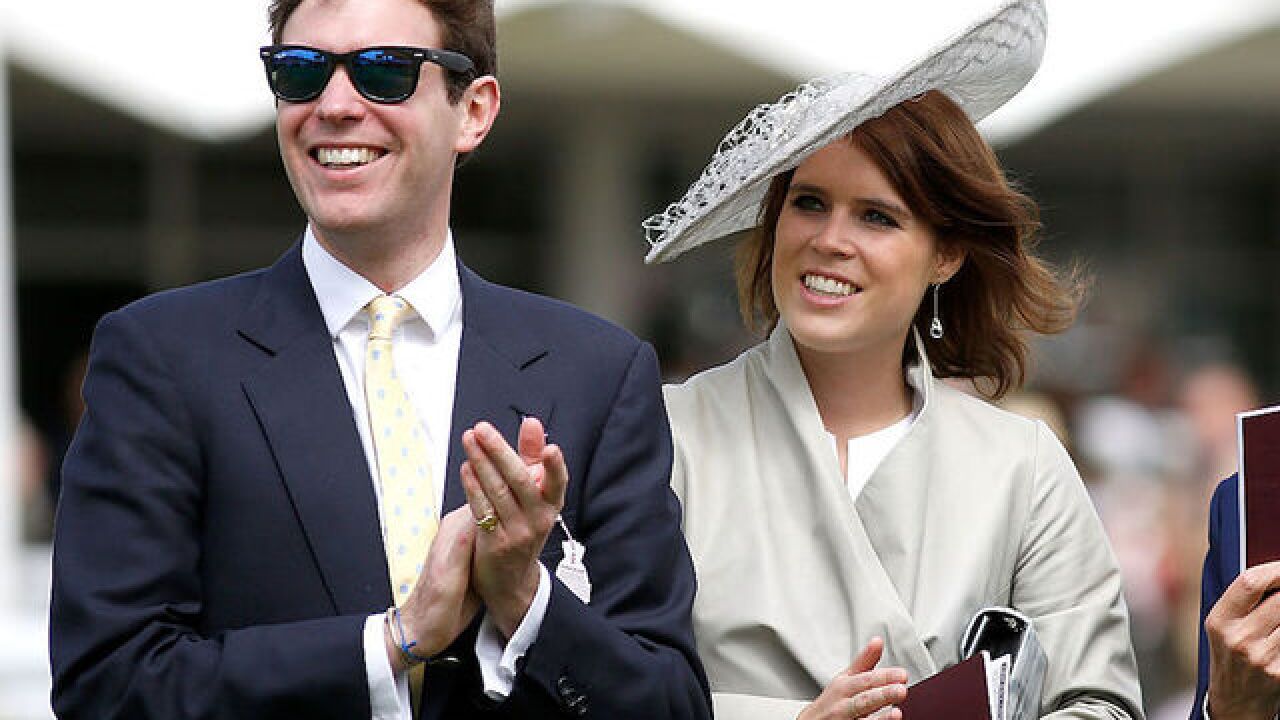 Image copyright 2018 Getty Images. All rights reserved. This material may not be published, broadcast, rewritten, or redistributed.
Tristan Fewings
<p>General views on day three of the Qatar Goodwood Festival at Goodwood Racecourse on July 30, 2015 in Chichester, England.</p>

The ceremony took place in St. George's Chapel, which also hosted the wedding of Harry and Meghan Markle, now the Duke and Duchess of Sussex, in May.

Pixie Geldof, British model, singer and third daughter of Irish singer-songwriter Bob Geldof and the late television presenter Paula Yates, was among the early arrivals at the chapel on a windy but sunny fall morning.

A wide variety of colors were on display, from autumnal maroons to pastel shades. Several women struggled to hold on to their hats as a strong wind whipped across the grounds of Windsor Castle.

Model and actress Cara Delevingne arrived at the castle in a suit and top hat, while actress Demi Moore selected a dark red dress by Stella McCartney. Moore was accompanied by American florist and perfumer Eric Buterbaugh, with whom she has been friends for many years.

Robbie Williams, British singer and former member of pop group Take That, was spotted arriving at Windsor with his wife and fellow X-Factor judge Ayda Field. They have been friends of Eugenie and her sister Beatrice for years and their daughter Theodora is a bridesmaid at the ceremony.

British artist Tracy Emin, comedian and writer Stephen Fry, and singer Ellie Goulding also took their places in the chapel in the run-up to the ceremony, as did many members of the royal family, including the Duke and Duchess of Sussex and Duke and Duchess of Cambridge.

Brooksbank works as a brand ambassador for Casamigos tequila, which was co-founded by actor George Clooney, property developer Mike Meldman and Rande Gerber, the entrepreneur husband of supermodel Cindy Crawford.

Eugenie, 28, is the younger daughter of Prince Andrew, Queen Elizabeth II's third child, and Sarah, Duchess of York. She is ninth in line to the throne and works as the director of the Hauser & Wirth art gallery in London.

While she has not attracted anything like the global attention bestowed upon her cousin Harry and his American bride, Eugenie's wedding is not a small, or cheap, affair.

More than 800 guests gathered in the Gothic chapel for the ceremony at 11 a.m. (6 a.m. ET), 200 more than were invited to watch the Duke and Duchess marry.

The Queen, Prince Philip and most of the royals were in attendance, with Eugenie's sister Beatrice taking on the role of maid of honor. Thomas Brooksbank, the groom's younger brother, was the best man.

The one notable absence was the Duchess of Cornwall, the wife of Prince Charles, who is attending a longstanding engagement at a Scottish school.

Prince George and Princess Charlotte -- the two oldest children of William and Catherine, the Duke and Duchess of Cambridge -- both have official roles at the wedding. George, 5, who is third in line to the throne, is a page boy and his 3-year-old sister is one of six bridesmaids.

The Princess first met her fiancé on a ski trip near Verbier in the Swiss Alps. Brooksbank proposed during a vacation in Nicaragua last winter.

The wedding service featured a personal prayer by Archbishop of York John Sentamu, while David Conner, the Dean of Windsor, gave the address and is officiating.

Opera singer Andrea Bocelli and members of the Royal Philharmonic Orchestra performed at the wedding, and a fanfare was played by trumpeters from the band of the Household Cavalry.

As the couple depart the chapel, the steps will be lined with members of the Grenadier Guards. Prince Andrew, is a colonel with the guards.

The newlyweds will leave in a carriage procession through Windsor, though the route will be far shorter than the one taken by the Duke and Duchess of Sussex. The cost of security will be borne by the taxpayer, which has raised concerns among republicans who note that the Princess does not carry out official royal duties on behalf of the Queen.

The Queen will host an afternoon reception in St. George's Hall, with more celebrations planned for the evening at Royal Lodge, the York family home in Windsor Great Park.