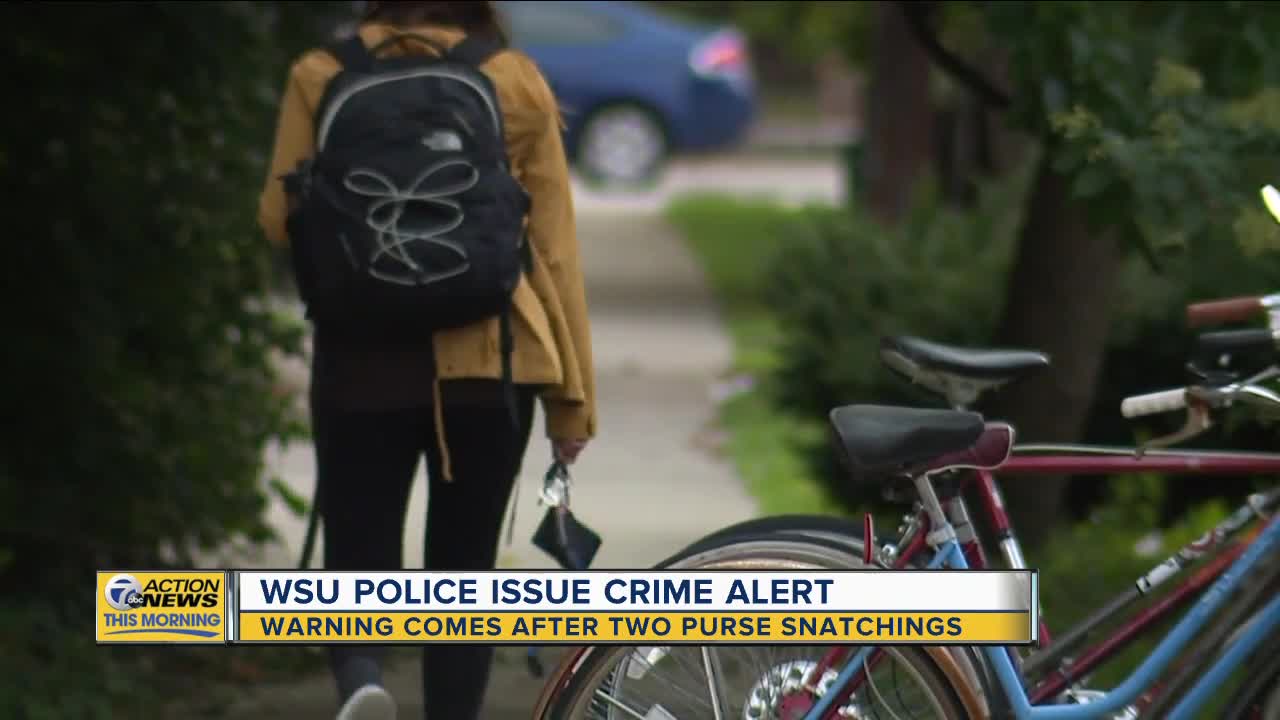 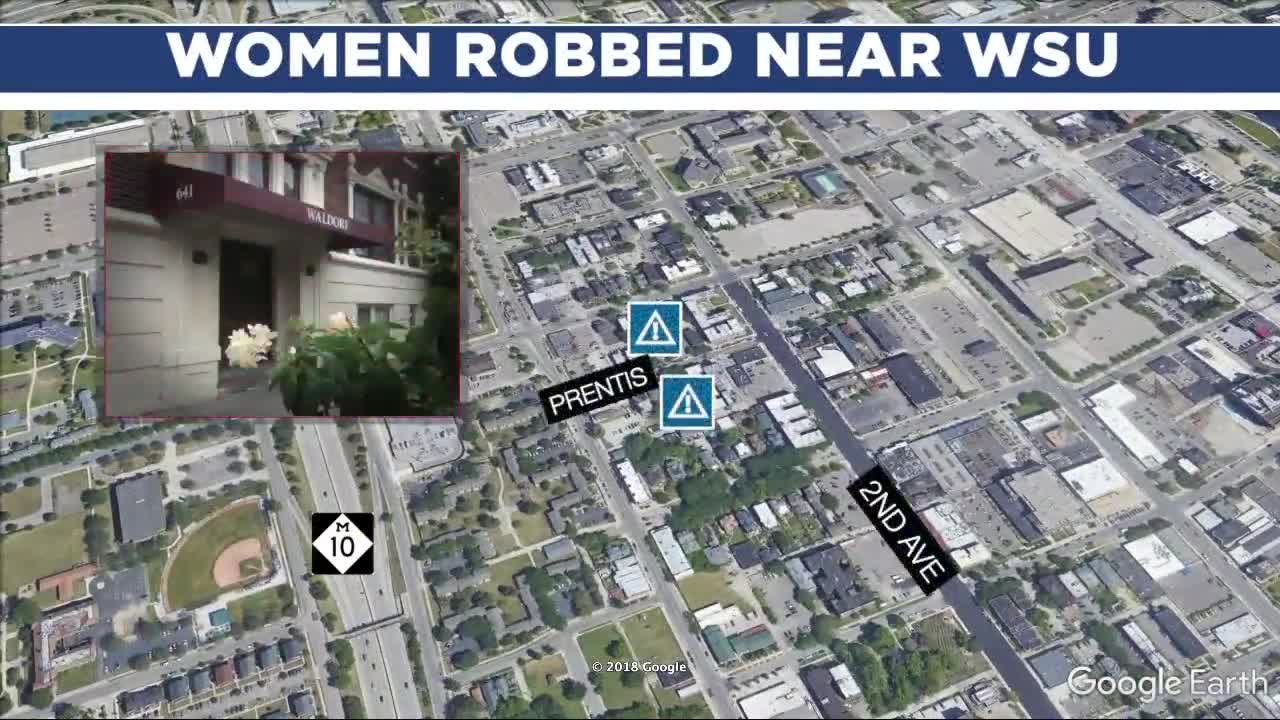 DETROIT (WXYZ — Be aware of your surroundings and watch out. Wayne State University police issued a community alert about a purse-snatcher targeting women in the heart of Midtown.

The offender(s) preys on unsuspecting women near the 600 block of Pentris St. between 2nd Ave., during late evening and early mornings, according to police.

In the two cases reported, the suspect(s) ambushed and overpowered them to take away their handbags.

Two crimes have reported between Oct. 8. and Oct 13.

One of the victims is a 23-year-old Wayne State student who told investigators after she left Jet's Pizza on Tuesday around 9:30 p.m. man ran up to her and knocked her to the ground. After a brief struggle the perpetrator ripped away the purse, according to a witness who attempted to intervene.

Another victim is a 24-year-old who told investigators two suspects knocked her down and stole her belongings as she tried to get inside her apartment.

It's unclear if Green Light cameras caught the suspects in the area.

Be Aware of Your Surroundings:
Police Officers use this term frequently. It means nothing more than simply being aware of what is going on around you and whether or not that activity is normal and expected for the setting. If something seems strange, unusual or suspicious, you are asked to contact the WSU Police immediately at 313-577-2222. Officers will be dispatched immediately to check out the activity.

If you feel the least bit apprehensive about walking from "point A to point B", simply call the WSUPD at 313-577-2222. (You should already have that number preprogrammed into your cell phone). Tell the Dispatcher you would like a Safewalk. Tell them where you are and where you would like to go. When available, a uniformed and radio equipped WSUPD Cadet will be dispatched to your location and will accompany you to your destination. Afterhours, or when a Cadet is not available, a WSUPD Officer in a scout car will be dispatched to your location. This service is free!

Notice Other People:
Look at the people around you, not just a momentary casual glance, but take a good look. Notice if they just glance at you (a normal reaction when making eye contact with a stranger) or if they are watching you. If you notice that they are paying more than momentary attention to you, that may be a red flag that you are about to be targeted.

Open Display of Valuables:
The open display of valuables, including jewelry, cash, and/or high-end electronics (including cell phones, iPads, iPhones, etc.) in public places could be just the information a potential thief needs to target you as his next victim.

Trust Your Instincts:
If someone makes you feel uneasy, trust your instincts and act accordingly. Whether indoors or out, change directions and proceed to areas where other people may be around.

Assess Your Own Vulnerability:
Strangers aren't out to attack YOU. It is nothing personal, they are just looking for the easiest target of opportunity. Your goal, therefore, is to look like somebody who will be too much trouble to mess with. They also want to make you their victim without attracting attention from others.

Make it a point, wherever you go, to stay in areas where other people are present. As soon as you enter an area where no one else is around, your guard and defenses should be on alert.

Attitude:
Keep your head up. Look at your surroundings and be aware of them. Headphones may give the impression that you are less aware, as well as being completely engaged in a cell phone conversation.

To reduce your chances of becoming a robbery victim, we recommend you routinely walk in areas where you can see others and others can see you.

Robbery perpetrators, like any other criminal, don't want to be caught "in the act" of robbing someone. They prefer areas where neither potential victims nor witnesses will see them. By staying in populated areas, you increase your chances of never being selected for this type of crime.

Whether you are in the city or the suburbs and you find yourself confronted by a robber, the most important thing that you can do during the incident is to prevent, if possible, any violence. Always assume the robber is armed, even if you can’t see a weapon, and act accordingly. If you are the victim of a robbery consider these important tips:

• Get it over with quickly. Chances are if you stall, the robber will get nervous and may be more prone to violence.

• Nothing you have or own is worth getting hurt for. Valuables can be replaced, you cannot.

• Do what the robber asks, but do not volunteer to do anything more. Move quickly, but carefully to give the robber exactly what they want.

• Do not fight or try any impulsive heroics. The risks are high if the robber is armed.

• Do not chase the robber. Carefully note their physical description and the direction they flee in. If they have a vehicle, note its

• If you have the opportunity to flee, do so immediately. The robber wants your property most of all. Drop it or throw in one direction, then

run in the opposite direction, to an area where there may be other people around.