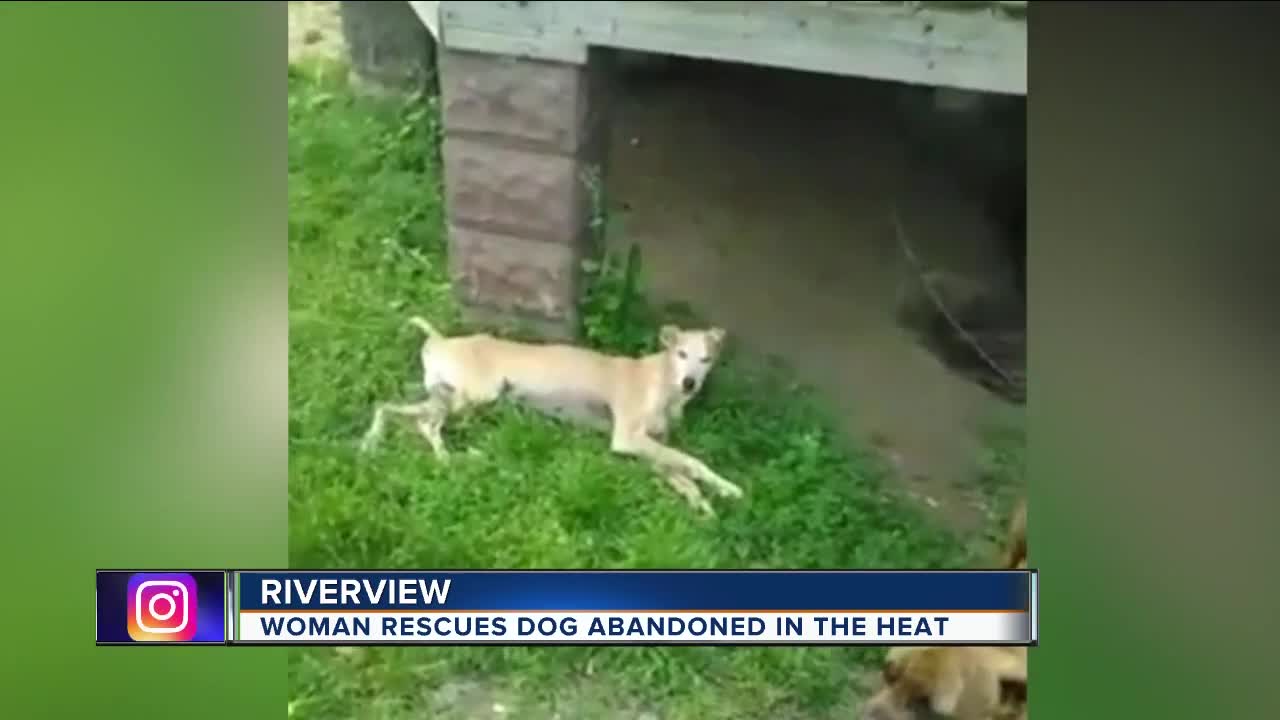 A dog is doing much better and is expected to recover after being rescued by a woman in Riverview.

RIVERVIEW, Mich. (WXYZ) — When Shawna Justice was working on trapping some cats in a neighborhood in Riverview Saturday, she happened to see a dog in someone's yard and she thought he was dead. But when another dog barked, the lifeless dog lifted his head.

"To think he has spent God knows how long in that backyard dying like that is a very sickening thing," said Justice, who told 7 Action News that she called Riverview police Saturday in hopes of getting help for the dog that was in a fenced yard and no one was home.

Justice said the officer on the other end of the line told her that he knew what dog she was talking about and said they'd been out there before and that his owners indicated the dog was about 18-years-old, had hip dysplasia and said there was nothing that could be done.

Justice went live on Facebook with an urgent plea for people to call Riverview police to respond to her location quickly and get some sort of medical care for the dog that she knew could not withstand the heat much longer in his condition.

The dog, that appears to be a Greyhound-mix, was emaciated. There was another dog in the yard and there was food and water available, but the emaciated dog was in no shape to get to it.

Officers did arrive and could be heard on Justice's Facebook recording.

"We're going to call animal control. I know they don't work on the weekend," said one officer, who told Justice that they would notify animal control on Monday. "She's suffering from that hip disease. Our canine has the same thing."

The officers said they'd be back to check on the dog and see if the owner was home and then they left.

Justice, believing the dog would not survive until Monday, remained at the house until the dog's owners returned home. They heard she was live on Facebook and they were upset.

They reportedly told Justice they would surrender the dog to her as long as it wouldn't cost them any money.

Dr. Lucretia Greear, of Woodhaven Animal Hospital, said the dog, Jake, would have died without intervention.

Jake didn't have bad hips from dysplasia. His pelvis was broken in two places, according to Dr. Greear, who added that Jake actually appears to only be about 10 years old, not 18.

Jake's former owners told Action News Monday that many years ago his back end was injured when he was stepped on by other dogs.

However, Dr. Greear believes the fractures to Jake's pelvis happened in the last four to six weeks, and she said he was either hit by a car or someone struck him hard enough to fracture his pelvis.

When Action News asked, Jake's former owner said he's never been hit by a car and they denied anyone ever hitting him.

Late Monday afternoon, Riverview police acknowledged that on May 12 they were called to the house where Jake lived to investigate a "dog malnourished."

A ticket was issued but the incident report does not indicate what the ticket was for or what, if any, action was taken to help the dog.

Greear said Jake doesn't have much arthritis. He wasn't walking because he was in pain. And she said Jake wasn't eating the dry dog food that was in the yard because his teeth are in horrible condition. Dr. Greear called it one of the worst cases of dental disease she's ever seen.

The Animal Resource Funding Foundation (ARFF) is covering the cost of Jake's extensive medical care, which will include Dr. Greear, a veterinary surgeon, fixing his pelvis and removing the teeth that cannot be saved.

If you'd like to help cover the cost of Jake's care, you can click here to donate to ARFF.

"I'm inspired by him because his issues are treatable," Dr. Greear said. "He's not a 19 or 20-year-old dog that needs to be put down. He's dehydrated. He's hungry, and he's in pain.

"It's a very rewarding thing," Justice said. "He's a totally different dog now. This is a dog that wants to live."

Riverview police said their detectives will be following up to investigate possible cruelty.