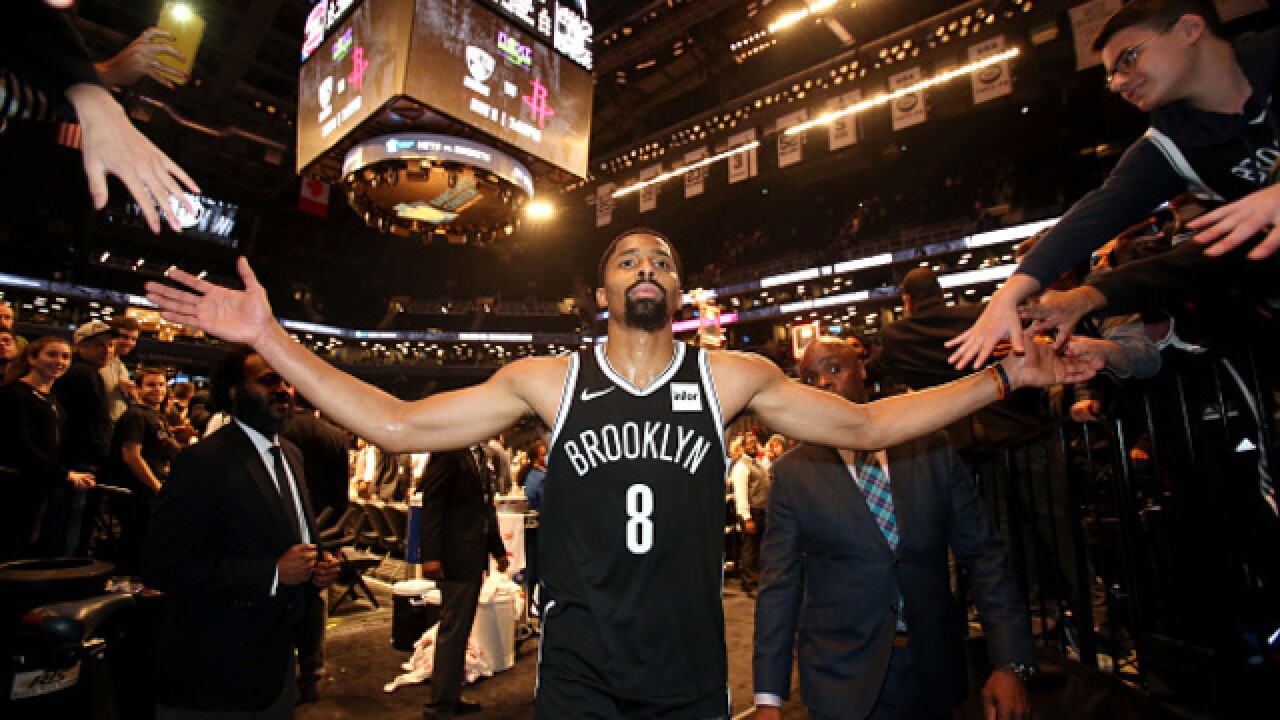 Copyright 2018 Scripps Media, Inc. All rights reserved. This material may not be published, broadcast, rewritten, or redistributed.
Nathaniel S. Butler
<p>BROOKLYN, NY - OCTOBER 31: Spencer Dinwiddie #8 of the Brooklyn Nets leaves the court after the game against the Detroit Pistons on October 31, 2018 at Barclays Center in Brooklyn, New York. NOTE TO USER: User expressly acknowledges and agrees that, by downloading and/or using this photograph, user is consenting to the terms and conditions of the Getty Images License Agreement. Mandatory Copyright Notice: Copyright 2018 NBAE (Photo by Nathaniel S. Butler/NBAE via Getty Images)</p>

Spencer Dinwiddie made a 3-pointer with 7.1 seconds left in overtime and finished with 25 points to help the Brooklyn Nets beat the Detroit Pistons 120-119 on Wednesday night.

Joe Harris added 23 points, Caris LeVert and Jarrett Allen had 19 each, and Jared Dudley finished with 11. The Nets snapped a three-game losing streak to improve to 3-5.

After Dinwiddie's late 3-poiter, Griffin missed a fadeaway. The Pistons have dropped two straight to fall to 4-3.

The Nets trailed by as much as 10 in the third quarter, and entered the fourth down 83-77. Brooklyn ended up outscoring the Pistons 33-27 in the fourth quarter, with Dinwiddie hitting a 3-pointer with 32 seconds left to force overtime.

Pistons: Reserve Jose Calderon's 3-pointer with a second left in the first half gave Detroit a 60-54 lead. Calderon finished with eight points, two rebounds, a steal and a blocked shot.

Nets: In his second game of the season, Nets power forward Rondae Hollis-Jefferson had eight points and seven rebounds while playing a reserve role. Backup big man Ed Davis had with 10 points and 10 rebounds.

NOT PASSING THE BOARDS

During his pregame press conference, Nets coach Kenny Atkinson bemoaned his team's performance on the glass in a 115-96 loss to the New York Knicks on Monday night. In the loss to their crosstown rivals, the Nets were out rebounded 53-32. And Atkinson focused on his guards, who combined for eight rebounds. "A lot of times our bigs are locked in or boxing out a big, and our guards are not pursuing the ball like they should." Against the Pistons, Nets guards had 18 rebounds.

MIDDLE OF THE ROAD

Historically, defense and the Detroit Pistons have been synonymous terms. Through seven games of the Dwane Casey Era, Detroit is in the middle of the pack defensively, allowing 111.3 points per game. Offensively, they entered the game scoring 109.7 points per game. "In today's NBA, scoring is at a premium," Casey said before the game. "The pace is way up. Teams attempting the 3 is way up, so I would say scoring offensively is huge."