Larkin talks relationship with Steve Yzerman, growth in his game amid tough season 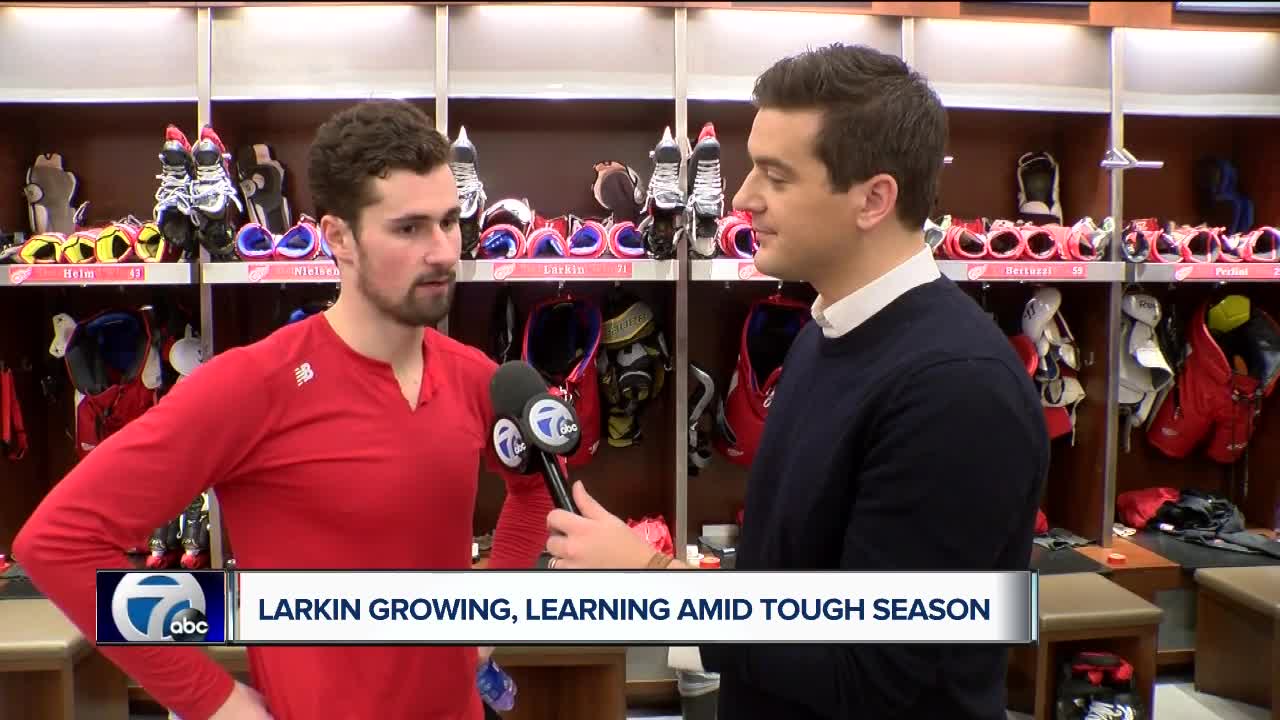 Dylan Larkin has built his relationship with Steve Yzerman, and has found growth in his game amid a tough Red Wings season. Brad Galli has more with Larkin.

DETROIT (WXYZ) — Dylan Larkin is speaking about his relationship with new Red Wings GM Steve Yzerman and how he's growing amid a tough Red Wings season this year. Below is a Q&A with 7 Action News' Brad Galli.

Q: How tough has it been when the production isn't coming for you consistently, not just for you but for a lot of the guys on the team

A: I'm not panicking about my numbers or stats. I think I had an OK start and I think I picked up my game a little more. I'm more worried about being consistent and feeling good about by game more consistently here. The last couple of weeks I've felt good about it and the team has played better and it's helped me. I wouldn't say I'm disappointed, but I want to be great, I want to be a great player. Am I a 100 point player in the NHL? I don't know, maybe one day, but I'm OK with being a 55-60 point player and being a great defensive player and helping this team win in a tight game and in a playoff game where it matters.

Q: How much have you talked with Steve Yzerman about that growth with this team?

A: A lot of my conversations with Steve are about that. About being a great defensive player and how that will even help your offense and doing it the right way, coming to the rink every day and being a leader and working hard and having a great attitude. For me right now, that's what I'm focusing on. Just having fun playing the game and working as hard as I can and being a great leader for the guys that are coming up and down. It's been challenging at times but defensive game is what you can control whenever you're on the ice, so I've tried to focus on that this year.

Q: Have you gotten to know Steve Yzerman better, as a boss and as a person?

A: Having him around, he's as serious as it gets about the game. I feel I am too. I love the game and he does. It has been good, but we need to perform here and player sin the room. We need to turn it around at some point here and we all know that. We all want to be the guys in here that do it with a couple more pieces through the prospects we have and upcoming drafts. We understand that we have to be the guys that turn it around before it's too late for us.

Q: Is there room for fun when you have a year like this?

A: It's tough, it's tough. I think even spending some time with our mom on the mom's trip, I know my mom, when I call her after games, she's always the first one to say 'it looks like you're not enjoying it.' She knows when I'm playing my best and playing to the capabilities that I can and she knows that I'm having fun doing it, I'm enjoying it. At this time, I think we could all take a step back and enjoy being an NHL player for the Detroit Red Wings and realize how special that is.