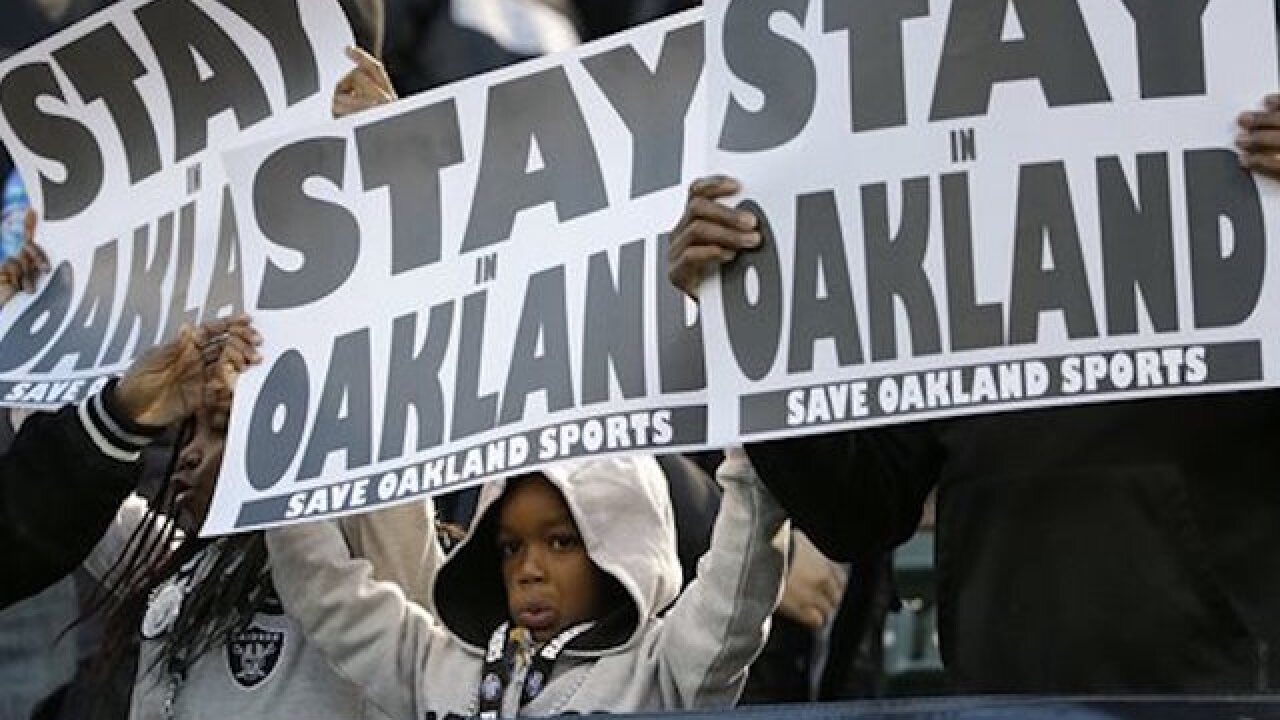 LAS VEGAS (AP) — Raiders owner Mark Davis says he wants to move the team to Las Vegas and is willing to spend a half billion dollars as part of a deal for a new stadium in the city.

Davis upped the ante in a bid to move the team to this gambling city, appearing Thursday alongside soccer great David Beckham and billionaire casino owner Sheldon Adelson before a committee studying the idea of a $1.4 billion stadium.

He told committee members he is not a billionaire but will put $500 million — with $200 million of that coming from an NFL loan — into funding the stadium to move the team to Las Vegas.

"Together we can turn the Silver State into the silver and black state," Davis said.

Davis noted the Raiders played in Las Vegas in an exhibition in 1964 that was the only game by future NFL teams in the city. The Raiders beat Houston before an overflow crowd at the city's baseball field.

"With your help it won't be another 50 years before the Raiders play another game in Las Vegas," Davis said.

Adelson, owner of Las Vegas Sands, is spearheading building a 65,000-seat stadium just off the Las Vegas Strip to host a variety of events, including UNLV football, soccer matches and major concerts. But it is the inclusion of the Raiders that is pushing the stadium forward, and the appearance of Davis before the committee was the most solid commitment to date to moving an NFL team to the city.

The Raiders have a one-year lease in Oakland for next season, and Davis indicated the team would likely stay there until a new stadium is built. He said the Raiders could play a preseason game in the aging 40,000-seat UNLV stadium but that it wasn't suitable for regular-season games.

Davis said he was committed to carrying on his father's legacy with the Raiders, and that the No. 1 thing to ensure the Raiders brand lives on is that the team gets a new stadium.

The NFL has long shunned Las Vegas, refusing its TV ads and telling players not to make appearances at casinos. But Davis said he believes owners will approve the move if the stadium is built.

"If we give them an offer they can't refuse and that's what we're talking about now, I don't see a problem," Davis said.

The meeting before the Southern Nevada Tourism Infrastructure Committee comes as the push for a stadium enters a sprint. Backers said they would ask for a special session of the Nevada Legislature in August to approve diverting some room tax funds for the stadium.

In all, Davis, Adelson and others want to put $650 million into the stadium, with the rest being generated by tourism taxes.

Beckham, who is behind a proposed Miami Major League Soccer franchise, sat next to Davis at the meeting, adding a bit of star power in a town that has always embraced stars.

"It's a bigger idea, it's about the MLS coming here, it's about bringing the biggest European teams here like Manchester United," Beckham said. "To be able to come here and be part of this and being able to speak this morning is a huge honor to myself."

NFL Commissioner Roger Goodell softened on the league's opposition to Las Vegas in recent weeks, saying it would be up to owners whether a team could be in a city that features legalized sports betting.

But the NFL plays games in London where there are many betting parlors taking wagers on the games, and Davis said he was confident he could win a vote among fellow owners for a move.