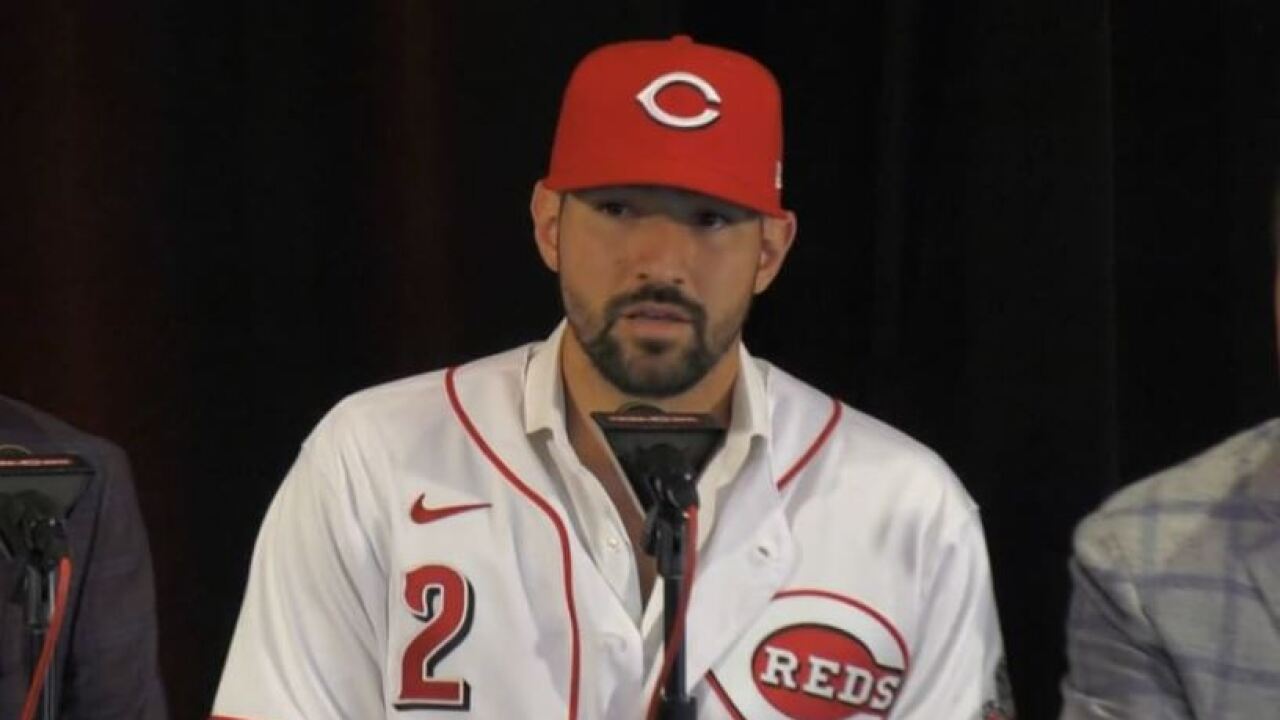 CINCINNATI (AP) — Nick Castellanos has 17 career at-bats in Great American Ball Park. Six times, he reached base on a hit. Three times, he touched them all after putting the ball in those oh-so-close outfield seats.

It's a small sample size, but it makes the Cincinnati Reds' new outfielder eager to find out how that translates over an entire season.

“Just some places you feel good, others not so good,” Nick Castellanos said in his new Reds jersey.

“I guess so far, I feel good every time I swing the bat at this ballpark. So I'm excited to be able to play 81 games for a season here.” pic.twitter.com/3IpaGKgpMT

Castellanos signed a $64 million, four-year deal with the Reds, matching the biggest in franchise history for a free agent. The former Tigers and Cubs slugger likes the way the Reds are going all out to try to emerge from their six-year losing streak.

He also likes the way the ball carries in their small, hitter-friendly park.

“Just some places you feel good, others not so good,” Castellanos said Tuesday at an introductory news conference. “I guess so far, I feel good every time I swing the bat at this ballpark. So I'm excited to be able to play 81 games for a season here.”

Castellanos provides another significant boost to an offense that prevented the Reds from being more competitive in the NL Central. Cincinnati has committed $164 million to four free agents this offseason.

Castellanos, second baseman Mike Moustakas ($64 million, four years) and outfielder Shogo Akiyama ($21 million, three years) represent a significant upgrade to a lineup that finished near the bottom of the National League in runs.

With left-hander Wade Miley ($15 million, two years) joining an already solid rotation, the Reds view themselves as a contender in a division that was wide open last season.

“Our goal this year is to build a team that can win a championship, and to do that it has to be deep and it has to be strong and you have to have multiple options at every spot,” said Dick Williams, Cincinnati's president of baseball operations.

Castellanos is a line-drive hitter who will likely increase his power numbers in the Reds' ballpark. He played for Detroit and Chicago last season and led the majors with 58 doubles. He also had 27 homers and drove in 73 runs.

“He hits the ball hard,” Williams said. “He hits it on the line. He hits it to all fields. He hits righties. He hits lefties.”

Cincinnati also returns Jesse Winker, Phillip Ervin and Aristides Aquino, who took over in right field last season after Yasiel Puig was traded to Cleveland. Aquino had a record-setting August before slumping severely in September.

Manager David Bell hasn't yet developed a plan for his outfield.

“We have a lot of options,” Bell said. “It's like a dream come true for any team or manager or players or fans or city where you have a team that has depth, has a lot of guys that are going to contribute."

Castellanos' contract provides him with numerous options, too. He can opt out and become a free agent after the 2020 and 2021 seasons, allowing him to look for a bigger deal if he has a sensational season in Cincinnati.

“This whole experience is kind of surreal,” Castellanos said. “I'm just excited. That's pretty much all I can say.”

Third baseman Eugenio Suarez had surgery Tuesday on his right shoulder and will be limited in spring training. The Reds said he had torn cartilage in the shoulder from a recent swimming pool injury. He is expected to be ready to play around the start of the season.